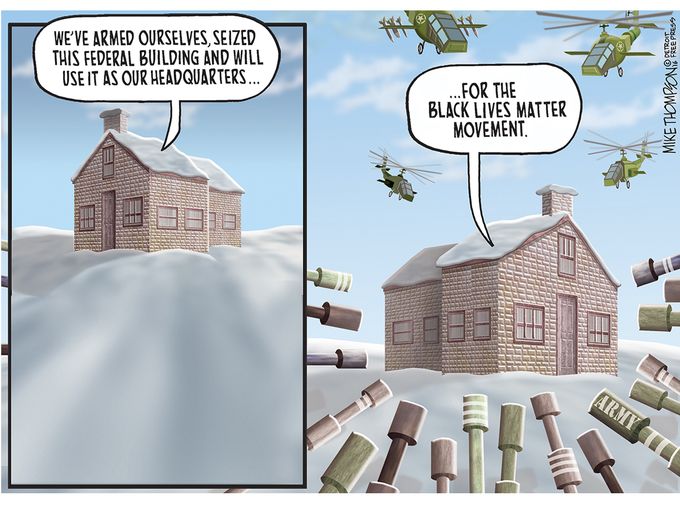 This cartoon from the USA is about the recent occupation by ‘YallQaeda’ gunmen of the Malheur National Wildlife Refuge in Oregon in the USA.

Yet, the Department of Homeland Security in the USA links the Black Lives Matter movement to ‘domestic terrorism’ and spies on it.

On 2 September 2015, there was an article in the Washington Times, a far right daily owned by the ‘Unification Church’, also known as the Moonie cult. The title of the article was ‘Black Lives Matter is a terrorist group’. The article was by Washington Times employee Tim Constantine, a supporter of Republican Party presidential candidate Ted Cruz.

As we have pointed out, to qualify as terrorists, the Black Lives Matter movement should at least have done what the ‘YallQaeda’ gunmen have done; which they have not.

But, back to the cartoon. Let us, for the sake of argument, presume that the Black Lives Matter movement, like the white gunmen in Oregon … no, saying they are white does not say enough. As they are white supremacists on record as whitewashing slavery for African Americans … OK, let us presume that the Black Lives Matter movement, like ‘YallQaeda’, would run around brandishing guns. That they also would occupy federal government buildings while brandishing guns. That they would threaten to kill police if police would try to get them out of these buildings. That they would say their occupation of a federal building was the start of a violent overthrow of the federal government of the USA.

If so, then … one would have the situation as pictured in the right half of the cartoon. And very soon after that, a situation, not depicted in the cartoon: all people inside the federal building would be killed. As they would not be extreme right white supremacist gunmen.

Let us also presume that some small group of Muslims would have done the same as ‘YallQaeda’. That these hypothetical Muslim federal building occupiers, would say, like ‘YallQaeda’ says, that they did not want violence. That they would not start it, but would react violently if police would try to remove them. As they did not recognize the federal government, but considered the occupied building as headquarters of an Islamic state in Oregon and eventually all of the USA. Well, we all know what would have happened in that theoretical case. The right half of the cartoon. Then, very soon, everyone inside the building killed.

And, if not (not much of a chance), if there would be no bloodbath, then the Rupert Murdoch media, the Washington Times, the teabaggers, Ted Cruz, Donald Trump, various conspiracy theorists, etc. etc. would claim that proved their point that President Obama really supposedly is a ‘closet Muslim’ and supposedly not born in the USA.

Photos Of Damage Caused By Oregon Occupiers Proves They Aren’t Fit To Manage Anything. The small government advocates left behind a big, expensive mess for taxpayers: here.

LEADERS OF OREGON WILDLIFE RESERVE STANDOFF ACQUITTED “Bundy and others, including his brother and co-defendant Ryan Bundy, cast the 41-day occupation of the Malheur National Wildlife Refuge as a legitimate and patriotic act of civil disobedience. Prosecutors called it a lawless scheme to seize federal property by force.” [Reuters]

58 thoughts on “#BlackLivesMatter and wildlife refuge gunmen in the USA, who’s the terrorist?”