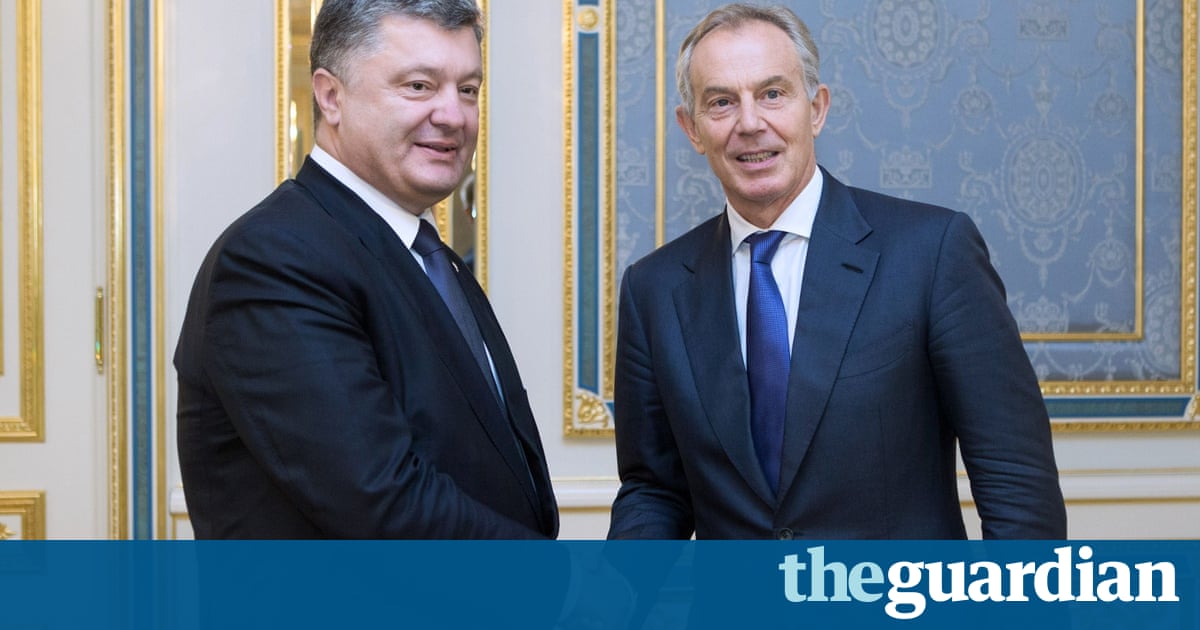 The government of Petro Poroshenko, chocolate billionaire, weapons manufacture billionaire and president of Ukraine, employs advisers. Like Dmitro Yarosh, the founder and leader of the neo-fascist Right Sector organization, now adviser to the Ukrainian Ministry of … sorry, I should use the euphemism ‘Defence’.

That government employs war criminals. Like the Aidar bataillion, which in a non-Islamist, but still ISIS-like way, beheads prisoners.

Apparently, the Poroshenko administration thinks that, even though the economy of Ukraine is collapsing for the majority of its people, they are not employing enough advisers and enough war criminals yet.

Unclear whether former British PM will take up offer by Petro Poroshenko, as Blair meets other key figures in Kiev hosted by oligarch Viktor Pinchuk

Katya Gorchinskaya in Kiev and Shaun Walker in Moscow

Tony Blair has been offered a role advising Ukraine’s president after the pair met in Kiev on Wednesday. Blair, whose foundation has long-standing links with a Ukrainian oligarch, is said to be considering the role.

“You are now facing great challenges in the spheres of security and reforms,” Blair told Petro Poroshenko, according to the Ukrainian presidential website. Poroshenko called Blair a “true friend of Ukraine” and offered him an advisory role. A source close to Blair declined to comment, and it is unclear whether Blair has accepted the role. …

The former British prime minister attended a private dinner on Wednesday night in Kiev hosted by Ukrainian oligarch Viktor Pinchuk and attended by other Ukrainian business and political figures, in which he was briefed on the current situation in the country and asked how he could help.

Blair has spoken a number of times at an annual summit hosted by Pinchuk in the Crimean resort of Yalta. He was the dinner speaker at the most recent event, hosted last September in Kiev because Crimea had been annexed by Russia.

It would not be the first time Blair has advised the government of a post-Soviet state. While billionaire chocolate magnate Poroshenko says he wants advice on driving through difficult reforms, Blair has been criticised in the past for cosying up to authoritarian governments in the region.

As part of his advisory role to Kazakhstan’s president, Nursultan Nazarbayev, Blair counselled the authoritarian ruler on how to handle criticism over the massacre of oil workers by riot police in 2011. Blair told Nazarbayev in a letter that the deaths, “tragic though they were, should not obscure the enormous progress that Kazakhstan has made”.

Poroshenko has appointed a number of foreign officials to key roles in his government, most notably naming former Georgian president Mikheil Saakashvili as governor of Odessa last month. …

Saakashvili also sits on Ukraine’s International Advisory Council for Reforms, the body which Blair has been asked to join, along with former Swedish foreign minister Carl Bildt. US senator John McCain turned down a role with the body, citing US Congress regulations.