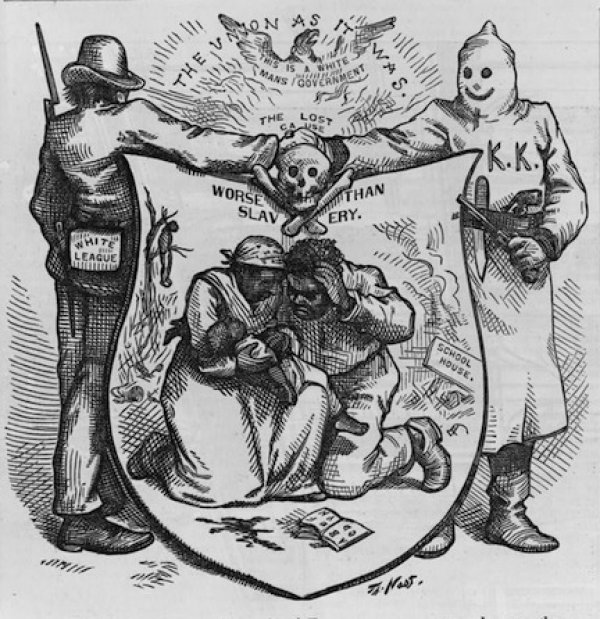 This is an October 1874 cartoon from Harper’s Weekly, by Thomas Nast, about violence by organisations like the Ku Klux Klan and the White League against African Americans in the southern states of the USA.

Translated from Leiden University in the Netherlands today:

The federal government ignored the rights of the black population after the American Civil War. Historian Mark Leon de Vries discovered that the national government virtually did not help at all. Doctorate ceremony on 23 April.

After the American Civil War (1861-1865) the national government passed a number of laws that should provide far-reaching social and political equality for blacks in the southern United States. This did not happen: a group of conservative whites in the region, the Ku Klux Klan, vehemently protested against this policy and orchestrated a campaign of terror against blacks and whites who supported them.

Government did not maintain its own laws

But not only local opposition was a cause of the sorry state of black Americans. De Vries: “Politicians from the north did little to enforce their own laws in the south. That was because the topic did not really live in the north, where relatively few blacks lived. It did not help the government much electorally to deploy people and resources accordingly. In addition, after some time the recovery of the relationship with the southern states became increasingly important.”

De Vries discovered this by the study of violence against blacks in the Red River Valley, Louisiana. “According to statistics, this was one of the regions where most violence occurred against black people. That was also because the federal court was far away: to get there you had to travel a few days, first on the Red River, then along the Mississippi. When the water was high enough, at least. Law enforcement was done mainly by local sheriffs and judges who disliked the ideas from the north.”

He believes that compliance with the laws certainly would have had effect on the position of black people. “First, because the violence in the area noticeably decreased in those places where local federal officials themselves took the initiative to enforce existing laws. Because there were abuses in the Red River Valley, Washington heard that too. After a few years, after federal enforcement was greatly reduced, violence flared up again. Second, if the legislation would have brought nothing, why did the southerners there resist it so much?” De Vries was the first historian who through the study of a particular subject area studied how the national government in the United States reacted to violence against blacks.

Echo of the past

De Vries explains on the basis of his research there is a link between the past and the present. “The racial terror and lawlessness of that period reverberates in the recent murders of black Americans.” Does he think that even now the national government should intervene more actively? “That’s a tough question. You can see that now more organs react to abuses. The policeman who recently shot and killed black man Walter Scott will be prosecuted, the police union does not support him. Let’s hope that change in culture will continue.”

In the Walter Scott case, it was extremely important that a bystander made an amateur video. If there would have been no video, then things might unfortunately have gone like in the case of the death of Michael Brown.

Also translated from Leiden University about this:

The prevailing view, often based on research into federal level politics, is that the failure of Reconstruction was a more or less inevitable consequence of the compromises that the Republican party had to make and of, as a consequence, the relatively conservative reforms that they endorsed.

This research suggests, in contrast, that the failure of Reconstruction was by no means inevitable.

It was due to the refusal of the federal government to maintain in practice its reforms, limited as they were. These reforms could have achieved much more if the federal government would have found an adequate response to the violent opposition among the white population. The outcome of Reconstruction was therefore not so much a “compromise of principles,” but overall a capitulation to terror.

The Republic For Which It Stands: The United States During Reconstruction and the Gilded Age, 1865-1896. Ida B. Wells, democratic rights, and lynch mob sexual assault accusations against African-Americans: here.

Ron Chernow’s new biography of Ulysses S. Grant is an account and analysis of the life of the Civil War general, two-time US president and memoirist: here.

This October 2017 video from the USA is called The United Daughters of the Confederacy altered the South’s memory of the Civil War.

31 thoughts on “Why post-1865 Reconstruction failed for African Americans”