This is a video of a red-breasted goose, a rare species in western Europe, among a flock of barnacle geese, on Schiermonnikoog island in the Netherlands.

After yesterday in Schiermonnikoog, the ship spent the night in the harbour.

In the morning, we sail to the east, the direction of our next island destination, Rottum. Not in a straight line, in order to avoid the many sandbanks. 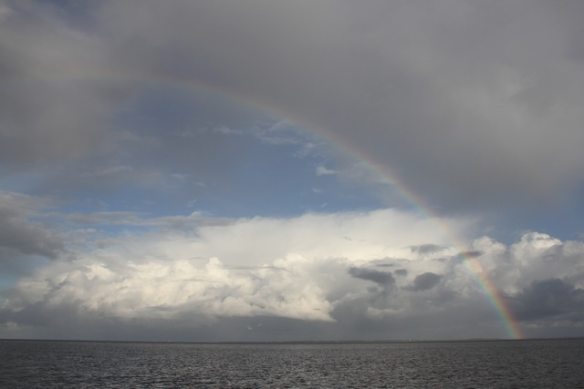 Sometimes it rains; sometimes, there is a rainbow.

On one of the beacons, marking where it is safe to sail, a peregrine falcon sits. Alone.

On the next beacon, a greater black-backed gull on top, and five great cormorants a bit lower.

About a hundred wigeons flying quite high.

A shelduck flies much higher.

As we approach Rottum from the south, hundreds of eider ducks flying.

A harbour seal shows its head above the waves.

An Arctic skua. It flies sometimes high, sometimes low; a bit like shearwaters.

It is low tide. We allow our ship to run aground. As the sandbanks get bigger and bigger, two bar-tailed godwits come to feed.

We will have to walk on the sand and through now shallow water to reach the desert island Rottum.