This is a video about common terns on Rottum island in the Netherlands. This species nested there for the first time in 2011. The video also shows an avocet passing.

After sailing from Schiermonnikoog, our ship allowed itself during low tide to run aground on a sandbank near the desert island Rottum, as the video shows.

Now, I have to walk barefoot on the sand and through the now shallow sea for about half an hour to Rottum.

I pass sanderlings and dunlins.

We reach the dunes of Rottum. Normally, it is illegal to go there. However, as the birds’ nesting season is over now, today is an exception.

Sanderlings on the beach.

Among the breaking waves swims a female eider duck. 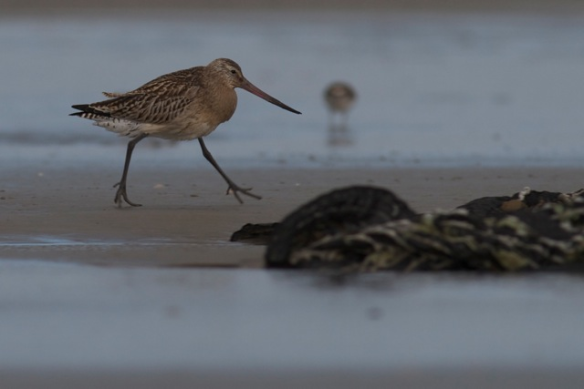 On the beach, a bar-tailed godwit looks for food.

On the outer edge of the outermost dune, European searocket flowers.

The warden tells that the rare grayling butterfly lives on the island. It is too late in the year to see it now.

In the summer, there are two wardens on the island, studying birds and other wildlife and keeping out trespassers. In winter, about two times a month, birds are counted on Rottum and Zuiderduin islet not far away.

On the beach, a Zirfaea crispata shell.

On the sea-side of a dune, sea lyme grass. It grows here spontaneously, contrary to European beachgrass, often planted by humans to make dunes stronger against flooding.

On the inner side of a seaside dune, bittersweet flowers.

In the marshy area behind the dunes, grey lag geese. There has been a marine wash-over on the island this year. Bringing salt water, which is good for some species and bad for others.

Just before we reach the warden’s house again, a meadow pipit flying and calling. Meanwhile, on the beach, a ringed plover.

As we walk back to the ship, many dunlins.