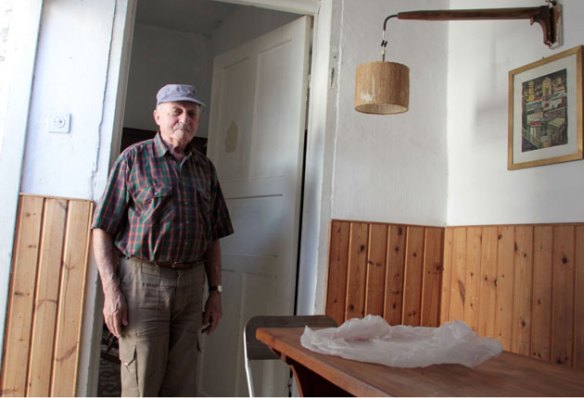 The Holocaust survivor whose life is in danger again

In the Israeli city of Safed, an 89-year-old man has been accused of treachery for welcoming Arab students. Catrina Stewart reports

First they threatened to burn his house down. Then they pinned leaflets to his front door, denouncing him as a Jewish traitor. But Eli Tzavieli, an 89-year-old Holocaust survivor, is defiant. His only “crime” is to rent out his rooms to three Arab students attending the college in Safed, a religious city in northern Israel that was until recently more famous for Jewish mysticism and Madonna.

A campaign waged by Shmuel Eliyahu, the town’s radical head rabbi, culminating in a ruling barring residents from renting rooms to Israeli Arabs, means that Safed is fast emerging as a byword for racism.

“I’m not looking for trouble, but if there is a problem, I’ll confront it,” says Mr Tzavieli, a Jew who survived Nazi forced labour camps and whose parents perished in Auschwitz. “These [tenants] are great kids. And I’m doing my best to make them comfortable.”

At an emergency meeting last month, Mr Eliyahu, the son of a former chief rabbi of Israel, was joined by 17 other religious leaders in warning that the city’s 40,000 Jewish residents were threatened with an “Arab takeover.”

The declaration appeared to trigger a campaign of harassment against Mr Tsavieli to pressure him into throwing the students out. When the pensioner paid little heed to his aggressors, he received an anonymous threat to set fire to his house and a vicious poster campaign accused him of “returning the Arabs to Safed.”

Mr Eliyahu, who once advocated the mass slaughter of Palestinians civilians in Gaza to stop the firing of Qassam rockets, declined to be interviewed for this story.

Theatre and politics in Israel: here.