Against Mussolini: Art And The Fall Of A Dictator

The Estorick gallery’s exhibition addresses a little known aspect of cultural history. An offshoot of a wider academic research project into the cult of Mussolini (1918-2005), its focus on visual arts c.1943-c.1945 stems from the project’s section about the aftermath of the dictator’s downfall in 1943.

The most powerful works are the drawings, paintings and sculptures. This art is not for the faint-hearted. We see torture, interrogations, crucifixions, hangings and urban destruction. In short the terror, arrogance, chaos and pain that fascism brings.

A few, such as Mario Mafai and the Communists Renato Guttuso and Tono Zancanaro, produced anti-fascist works covertly during the dictatorship itself. Others such as ex-member of the fascist party Alberto Bazzoni reacted after Mussolini’s downfall when Italy was torn by war and the north was occupied by German nazis.

All told the tale with the anguished passion of those traumatised by their recent experiences while surviving in impoverished war-time conditions.

In 1937 Zancanzaro created his fantasy creature Gibbo, a grotesque fusion of a Gibbon ape and Mussolini’s large pugilist’s head and short, bloated body.

This led to the Gibbo cycle, 2,500-3,000 satirical line drawings produced until 1945 which mocked the dictator’s vanity, sexual boasting and brutality, and by implication those who subscribed to his fascist ideology. These drawings upheld morale by being circulated clandestinely in Communist and anti-fascist circles.

Guttuso, who fought with the partisans, was arguably the greatest of the Italian anti-fascist artists. During the German occupation he produced frightening realist documentations of nazi oppression but he is best known for his revival of history painting to act as witness to contemporary events. During the dictatorship he alluded to events symbolically yet their anti-nazi message was clear. In Study for Crucifixion (1940) a naked Hitler astride a horse points to three crucified men against an Italian cityscape, clearly proud of his handiwork. 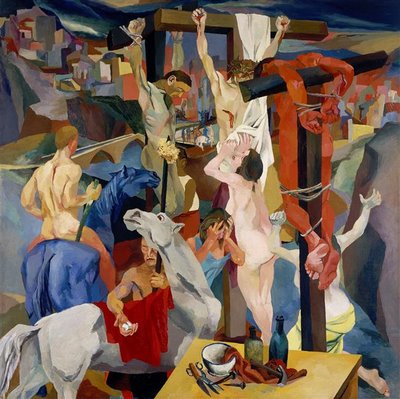 His small painting The Massacre (1943) uses expressionist boldness of colour and savagely crude outlines to depict the tragedy. A single distraught survivor weeps as she gesticulates helplessly towards the heaped bodies, their schematic heads, arms, torsos and legs entangled in a chaotic jigsaw of gloomy greys, raw oranges, violent reds and blacks.

Personal experience politicised Mario Mafai. A hitherto successful painter of serene, classical landscapes and still lives his style and subject matter changed after he and his Jewish wife had to flee Rome when the 1938 racial laws were passed. His Fantasia series begun in 1939 are among the most overt condemnations of fascism.

The deliberate crudity and violence with which he attacked the pictures’ surface in unsubtle, often unmixed paint mirrors that of the humiliations, beatings and interrogations of the vulnerable naked men and women portrayed. This is art born of raw anger.

In contrast, the drawings produced in the field of battle by partisan artists Renato Cenni and Vittorio Magnani are more sober depictions of the realities of warfare – the camaraderie, austerity and boredom of regimental life.

Created sometimes secretly, sometimes in battle conditions, often with limited access to materials and work space, this art was necessarily often small in scale. The intimate rooms of the Estorick gallery shows it to its advantage.

However, it would be marvellous to see these drawings, sketches and small paintings in the context of the post-war large-scale anti-fascist works which grew out of them, particularly Guttuso’s.

The anti-fascist theme becomes partly subsumed by the research project’s core theme of exploring Mussolini’s personality cult. The focus on the leader rather than on fascist ideology and its practice may well leave those unversed in Italian political and cultural history with rather hazy ideas about the causes of the repressions and brutalities exposed in the artists’ works.

For example, the 1938 racial laws are mentioned but not elucidated while the duplicitous cultural policies of Guisseppe Bottai, minister for education and culture, are neither presented nor explained.

These purported to tolerate the avant-garde but in fact favoured the fascist Novecento Italiano group which gave a modernist veneer to past Italian traditional art and stressed the characteristics of order, solidity and clarity.

In 1931 Bottai formed the State Corporate Syndicate for Intellectuals which controlled all art exhibitions and whose membership was limited to members of the fascist party.

Nor are we given much indication of the ideological basis of the anti-fascist opposition beyond references to “feelings of disgust” and passing mention of partisans and communists.

The exhibition’s theme is timely given the current need for artists’ opposition to reactionary governments. Hopefully a larger institution with the resources to borrow major works will develop this fascinating theme more fully.

This week in December 1910, the right-wing Italian Nationalist Association (ANI) was founded in Florence, prefiguring many of the characteristics of fascism as it would emerge a decade later. The party’s primary objective was war with Austria-Hungary for the “unredeemed” Italian-speaking lands of the upper Adriatic, and more generally the promotion of Italy in the sphere of Great Power politics: here.

5 thoughts on “Artists against Mussolini”