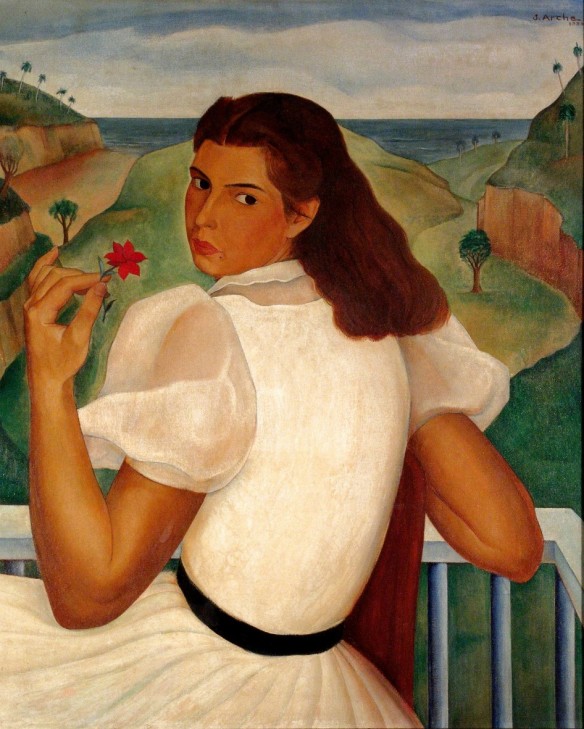 After the first part about the Cuban art exhibition, now the second part.

The exhibition was in 2008 in Montreal, Canada; now, in Groningen, the Netherlands.

For posters, booklet covers, etc., the exhibition used reproductions of the painting Portrait of Mary, by Jorge Arche (see top).

This is a video in Spanish about the Groningen exhibition.

Victor Manuel Garcia Valdes (1897-1969) was represented at the exhibition with “Eviction”, about oppression of poor Cubans under pro United States dictators.

Two artists had so many works at the Groningen exhibition that they both had a hall of their own. They were Wifredo Lam and Marcelo Pogolotti.

Wifredo Lam, from an African Cuban family, was very interested in putting links to Africa and other Third World countries in his work. The English language explanation speaks of “a visual arts manifesto for the Third World”. The exhibition in the Netherlands should have translated manifesto as “manifest”. However, they translated as “manifestatie” (manifestation).

In 1967, Wifredo Lam became well known as the initiator of the Cuba colectiva mural painting, made by almost a hundred artists from many countries.

About this work, The Power of Culture writes:

Some one hundred artists including Picasso, Karel Appel and Corneille each painted a small section of a gigantic canvas celebrating the victory of Cuban socialism. The painting was subsequently exhibited in Paris, where it was removed after only a few hours for fear of vandalism. It disappeared into the stores of the Museo de Bellas Artes in Havana, where it was attacked by termites. It was not rediscovered until the 1999 restoration of the museum, after which it was repaired.

Now the canvas is the crown jewel of the exhibition Cuba! Art and history from 1868 to the present day, in the Groninger Museum.

The next hall was for Marcelo Pogolotti’s works. Pogolotti is seen as the most important Cuban visual artist of the 1930s. At least, until 1938, when he became blind.

His Capitalism criticizes the hierarchy of capitalists vs. workers.

In 1935, Pogolotti made a very unflattering caricature of Adolf Hitler.

In 1931, he made The master and his bulldogs. In the exhibition, the sub-title “nazi system” is added. However, I am not sure whether Pogolotti’s awareness of the danger of Hitlerism showed already in this 1931 work; though it is clearly about oppression. In 1931, two years before he became dictator of Germany, Hitler was not very well-known in the Americas yet.

Five years after the Cuban revolution of 1959, the film Soy Cuba was made, explaining the reasons for it in the conditions under the Batista dictatorship. Parts of the film are shown at the Groningen exhibition.

In one of the halls with present Cuban art, there is a painting by Sandra Ramos, born in 1969. It is called La balsa (the raft). It shows Cuba as a raft at sea, surrounded by sharks.

There is also a hall about Cuban poster art, especially with posters about international solidarity.

And photographs of Alberto Korda and others.

As a conclusion, I can say that it is good that the many sides of the visual arts history of Cuba can at last be seen outside that country.

6 thoughts on “Cuban art exhibition in the Netherlands, part 2”