In the Groninger museum in the Netherlands, there is now an exhibition about Cuban art, from 1868 to today.

It includes about 300 works of art. Mainly paintings, drawings, and photos. But also some sculpture and (recent) installations.

This exhibition, Cuba. Art and History from 1868 to Today, is organized by the Montreal Museum of Fine Arts in collaboration with the Museo Nacional de Bellas Artes, Havana.

The year 1868 is important, as then a rebellion started against Spanish colonial rule and slavery. Slavery in the Spanish colonies was abolished even later than in the Dutch colonies, which already were comparatively late: in 1887.

Cubans kept fighting for independence. In 1899, the United States profited from the fighting in the Spanish colonies, by taking over as colonial master in Puerto Rico, Guam, and the Philippines; and basically, as neo-colonial master in officially independent Cuba. Cuba had to give Guantanamo Bay to the United States navy; though the treaty limits use of the Cuban territory to “coaling and naval purposes only”. The present use as a torture prison violates that neo-colonial treaty.

In looking at Cuban art from 1868 to now, one should look at this political background. Cuban artists have been influenced by various factors: European art, Mexican art, Afro-Cuban culture such as Cuban carnival imagery, etc. 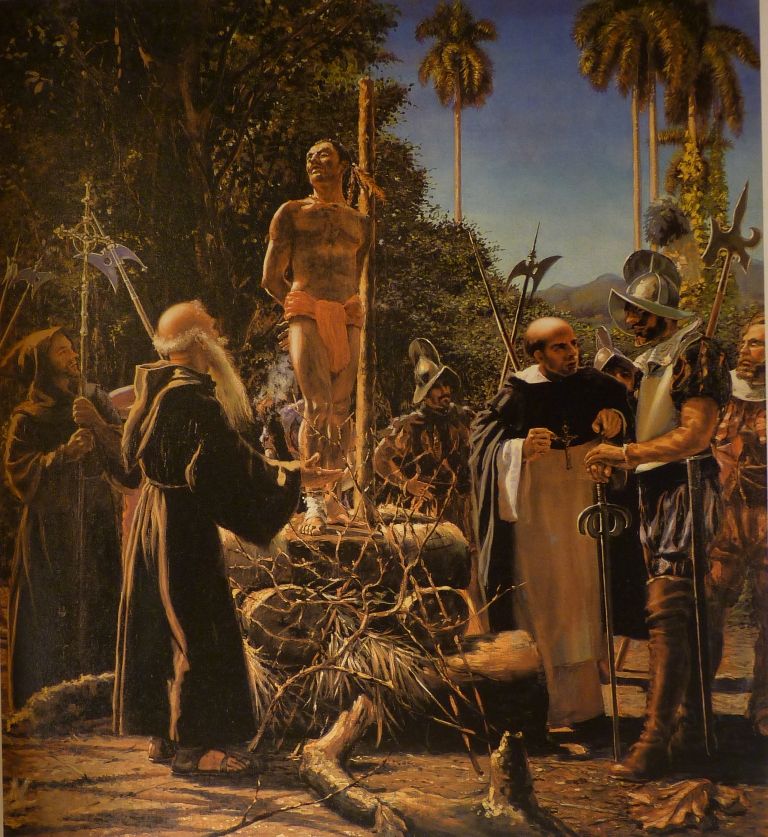 One big picture is about the native Cubans, persecuted since the late 15th century by the Spanish conquistadores. It is No quiero ir al cielo (I Don’t Want to Go to Heaven) by Augusto Garcia Menocal. It is about an Indian captured by the invaders for opposing them, and about to be burnt alive at the stake. A priest asks the Indian to convert to Christianity; so, that after his horrible death he may go to heaven. “Do the Spanish soldiers go to heaven”? the Indian asks. “Yes, being Christians”. “Then, I do not want to go to heaven”.

A moving exhibit is an anonymous photo from 1897. It shows a Cuban prisoner in a Spanish “re-concentration” camp. Almost starved to death, he looks like someone in a nazi camp in spring 1945.

Later, I will continue my review of this exhibition on this blog.

Columbus and the USA: here.

20 thoughts on “Cuban art exhibition in the Netherlands”