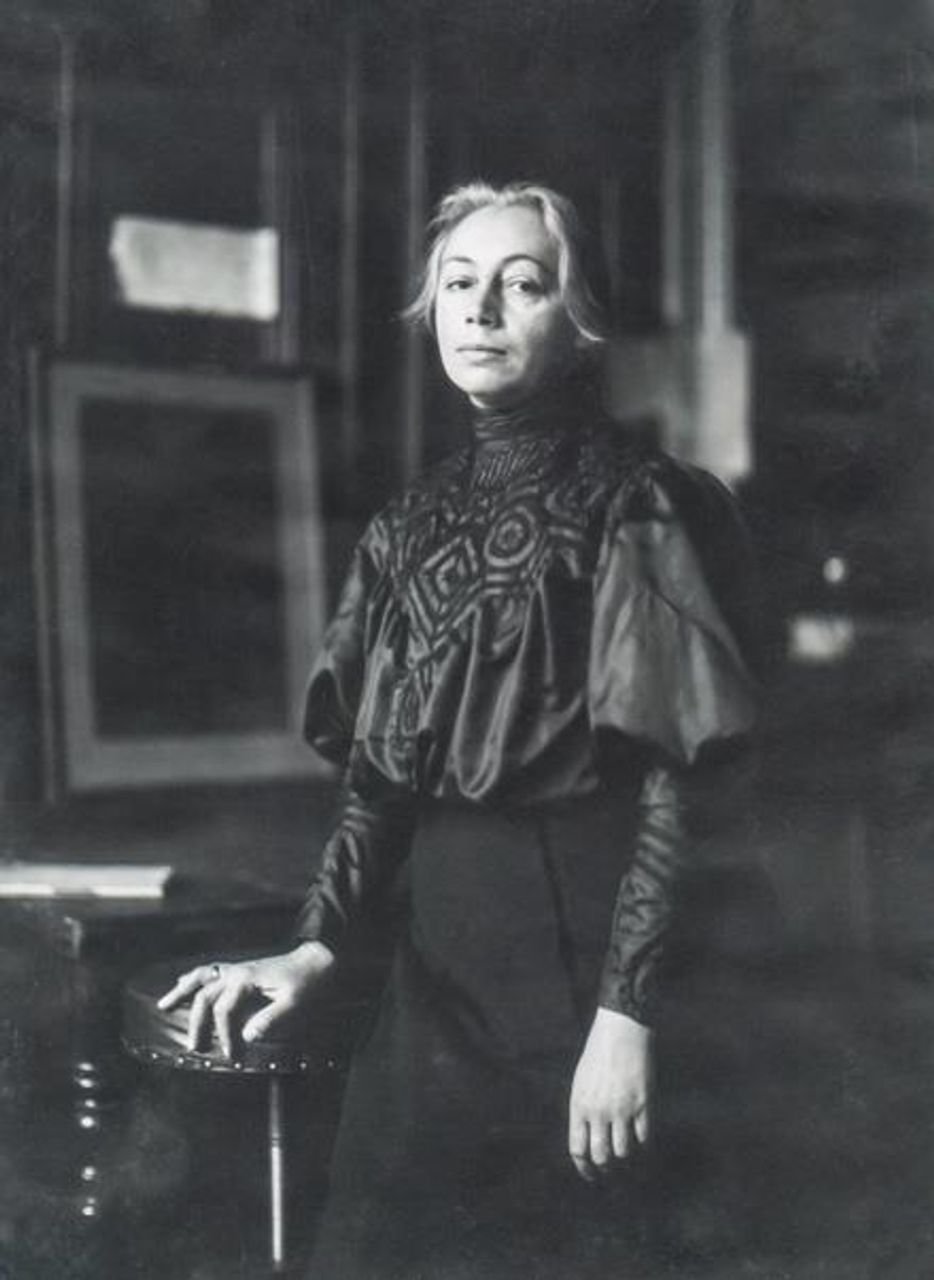 By Rafael Azul in the USA:

The great German artist on war, the working class and the murder of socialist Karl Liebknecht

The Getty Center, a campus of the Getty Museum in Los Angeles, is hosting an exhibition of intaglios, lithographs and woodcuts by German left-wing artist Käthe Kollwitz (1867-1945), one of the most prominent graphic artists of her day.

The show, Käthe Kollwitz, Prints, Process, Politics, displays a portion of a collection of 654 works by German artists gifted in 2016 to the Getty Research Institute by Dr. Richard Simms. Included in the gift were 286 works by Kollwitz, 52 of which are currently on display at the Getty, arranged chronologically.

Five remarkable series dominate the exhibition: The Weavers’ Revolt, The Peasant War, Karl Liebknecht, War and Proletariat. Also included are prints from her tribute to Émile Zola’s Germinal and from Woman with Dead Child, along with self-portraits.

The Weavers’ Revolt, inspired by Gerhart Hauptmann’s naturalistic stage drama The Weavers (1892), commemorates the 1844 rebellion of thousands of weavers in Silesia (then a Prussian province) against the brutal exploitation of the factory owners. Kollwitz made the series of prints, which brought her to artistic prominence, between 1893 and 1897. The cycle on the Peasant War, which Kollwitz created between 1902 and 1908, commemorates the peasant rebellion that took place across German-speaking regions in 1524-25.

The Karl Liebknecht series, about the murdered revolutionary, was done in 1919-1920. Kollwitz produced the War series between 1918 and 1923. Proletariat, denouncing the misery and hunger of the working class, following the abortive 1923 German revolution, was created in 1924-25.

Among the elements that make the current Getty exhibition exceptional is its inclusion of extremely valuable intermediary works that led to the final versions. As one moves forward, one can retrace Kollwitz steps, which reveal how she struggled to distill from preliminary drawings the essence of a scene or historical depiction. The viewer is invited, by this inclusion of preliminary works, to participate in that metamorphosis and arrives at a better understanding of Kollwitz’s artistic and political perspective. 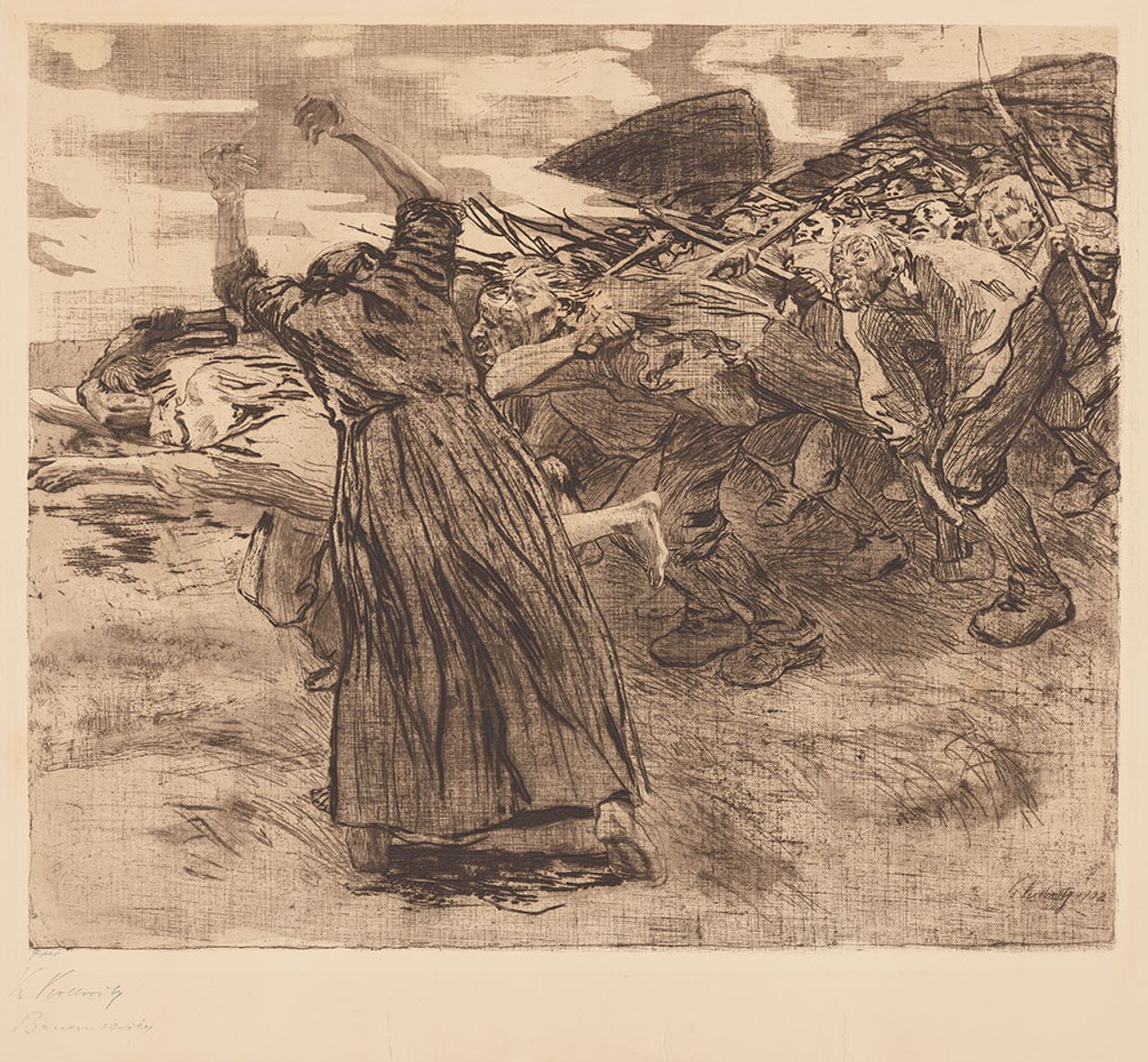 By removing the less important elements and tightening the representation of her subjects, Kollwitz, through her precise, complicated and intricate techniques, placed emphasis on what was emotionally, aesthetically and socially essential.

Karl Liebknecht’s family asked Kollwitz to portray the assassinated socialist leader. Liebknecht was summarily executed, together with his comrade Rosa Luxemburg, on January 15, 1919 on the orders of the counterrevolutionary Social Democratic Party (SDP) regime of Friedrich Ebert, Philipp Scheidemann and Gustav Noske. In an entry from her diary, dated January 25, 1919, Kollwitz writes: “Around the shot-up forehead were placed red flowers, the face proud, the mouth slightly open and painfully contorted.”

In the Liebknecht print, Kollwitz began with charcoal drawings of the deceased revolutionary surrounded by five mourners. She reworked this initial print by cutting and pasting. This initial “reject” was followed by a lithograph, also rejected. The work’s final version is a dramatic woodcut, centered on the impact of his death on those around him.

The use of light and shadow highlighting the individual faces and expressions and weathered hands of the workers who came to mourn the murdered man, with their darkened bodies, contrasts with Liebknecht’s own backlit face and dark, open mouth, his eyes shut, almost like a photographic negative image, surrounded by light. The viewer can imagine the worker in the foreground, with a wound on his forehead and his hand on Liebknecht’s shroud, pledging to continue the struggle. 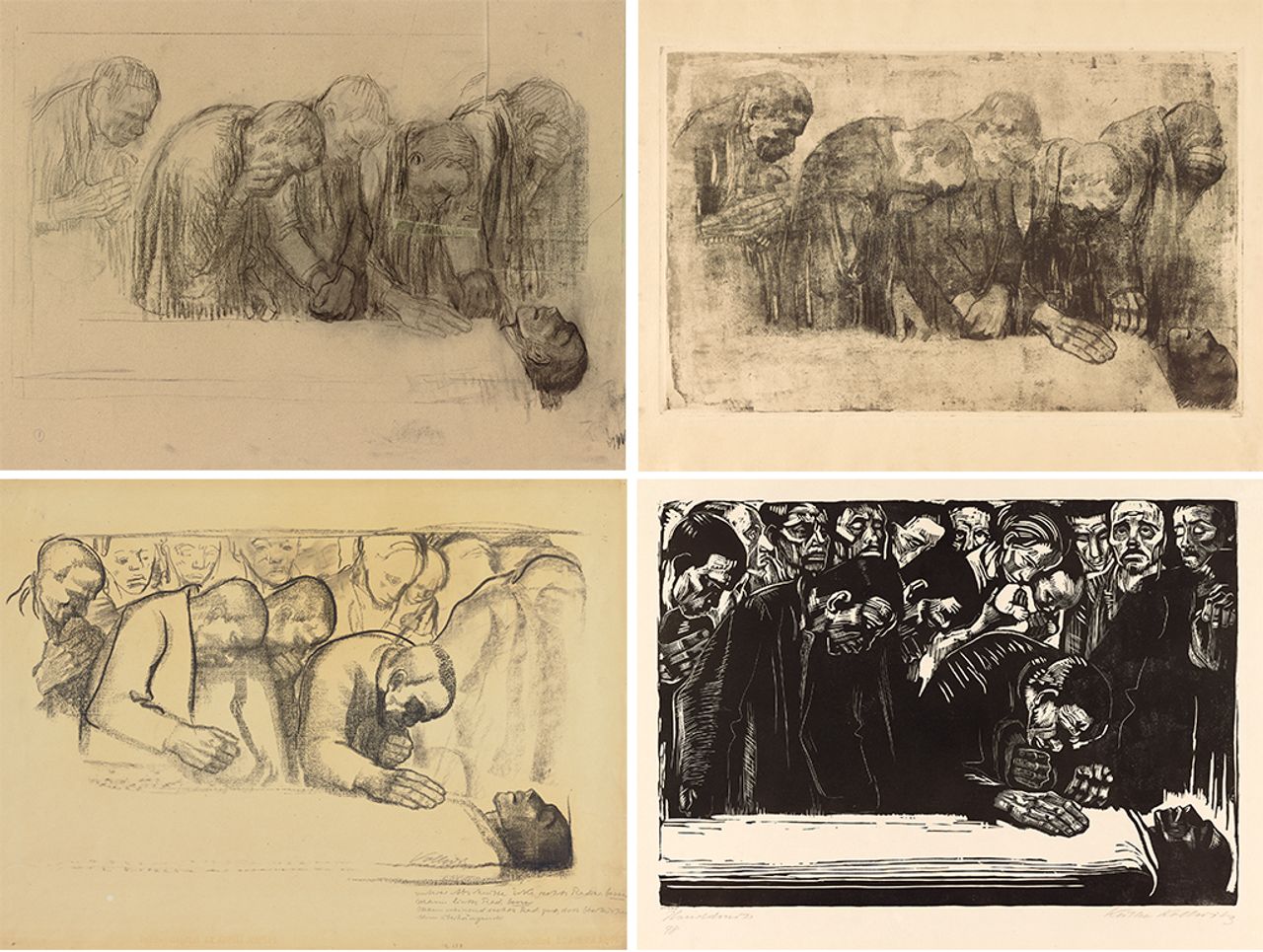 On August 4, 1914, one week after the eruption of World War I, the parliamentary deputies of the Social Democratic Party of Germany cast their vote in favor of war credits. Only weeks before, the Social Democrats had been singing hymns to the international unity of the working class. Now they were signaling their approval of the imperialist slaughter, resorting to the most grotesque pretexts to justify setting the workers of diverse nations against each other. The SPD position troubled and confused many party supporters, including Käthe Kollwitz and her family. The SPD’s support for the war was a consequence of a pronounced turn to the right by the party in the years leading up to the war, an adaptation to the national-reformist milieu of trade union struggles and parliamentary debate.

A letter from Käthe to her son Hans, in April 1917, sheds light on this situation: “You know, at the beginning of the war, you all said Social Democracy had failed. We said that internationalism had to be put aside for now, but back of everything the international spirit remains. Later on, this concept of mine was almost entirely buried; now it has sprung back to life again… the Social Democrats in Russia are speaking the language of truth. That is internationalism.”

Producing the Liebknecht remembrance had a powerful impact on Kollwitz herself, as she noted in a letter: “I was politically opposed, but his death gave me the first tug toward him. Later I read his letters, with the result that his personality appeared to me in the purest light.”

Liebknecht and Luxemburg bitterly opposed the betrayal of the working class by the SPD, which abandoned internationalism and helped transform the German and French working classes into tools of their own ruling classes. 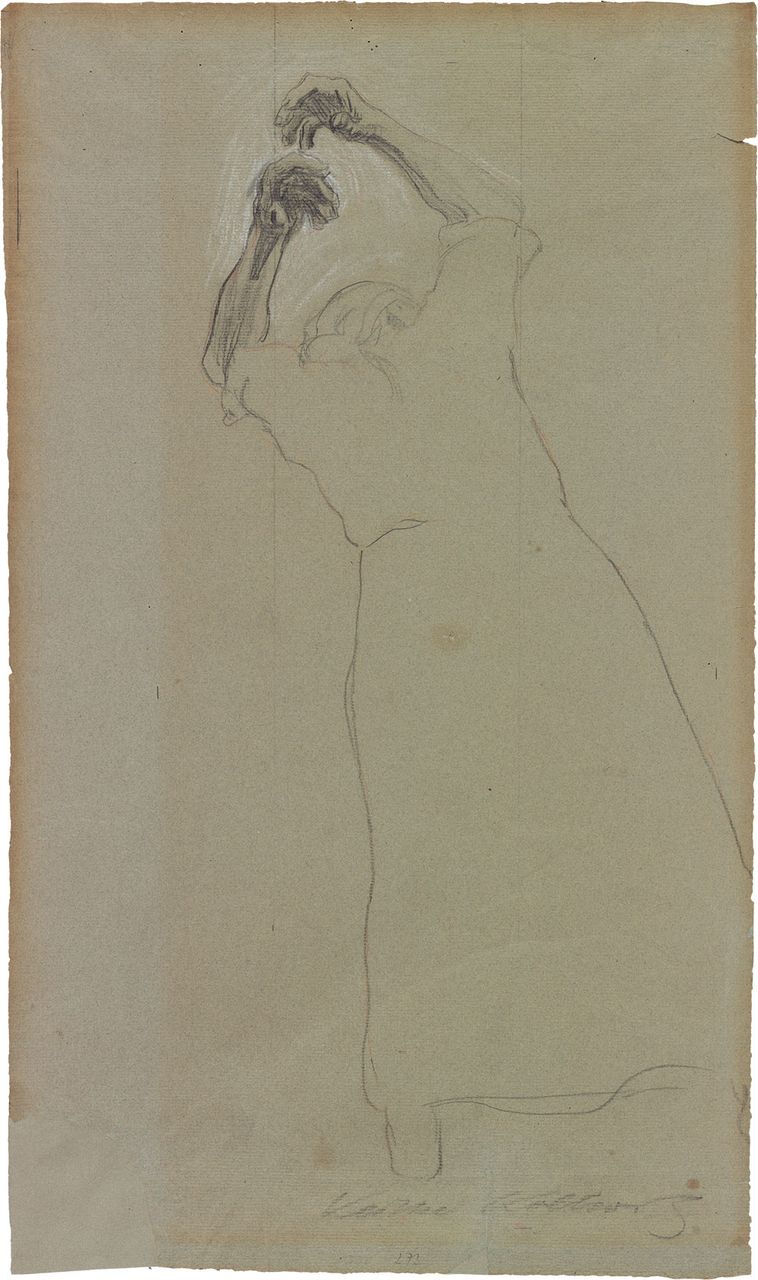 In the Peasant War series, the three preparatory drawings culminate in that of a peasant woman sharpening a scythe to be used as a weapon in the rebellion. Through the several works, Kollwitz increasingly focuses on the transformation of this peasant, from passively leaning of the scythe to sharpening in anticipation of the struggle. In the final version, the woman is sliding her sharpening stone across the blade, while her nearly shut eyes seem to convey her determination.

The Peasant War culminates in a battle scene, concentrating the anger of the peasants rushing into battle.

A similar transformation takes place for the final drawing “Hunger” in the Proletariat series, representing working-class women shielding their children from the ghost of death.

The themes of the Getty exhibition reveal the phases of the artist’s life, through the period of the German Empire under Wilhelm II (1888-1918) and the tragedy of World War I, the Weimar Republic (1918-1933), and the rise of Hitler in 1933. Each of these periods is mirrored in her artistic series, which are genuine visual political and personal manifestoes.

Each period represents personal (Kollwitz lost her younger son Peter in one of the earliest battles of World War I in 1914) and political crises for Kollwitz and the German working class as a whole.

Last week, as museumgoers walked by the literature table at the Getty’s Kollwitz exhibition, they were able to purchase, along with several volumes dedicated to the artist, copies of Rosa Luxemburg’s classic work Reform or Revolution (1899). That this volume is being sold and this exhibition takes place are testaments to the contemporary relevance of Kollwitz the artist and Luxemburg the revolutionary. 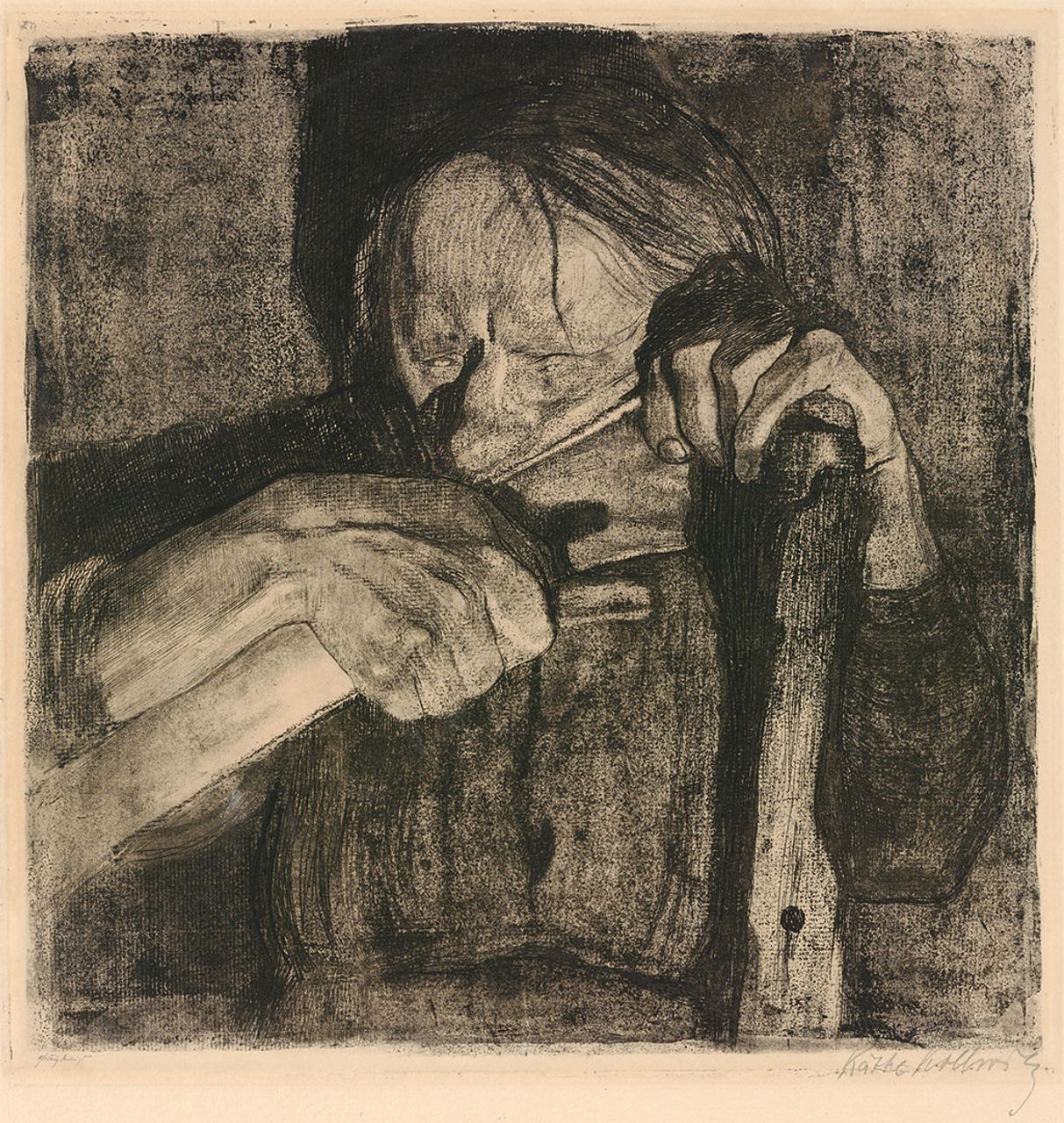 After experiencing the exhibition, one leaves with the certainty that these works, which describe the hardship and struggle of workers and peasants, might have been created for the current historical period, describing not just the current wars and the suffering that affect millions of people, but also the fighting spirit of oppressed masses, as they “sharpen their scythes.”

The Käthe Kollwitz exhibition will be on display at the Getty Center until March 29, 2020. The exhibition includes two lectures. The first one, on January 28, is Iconic Intelligence: How Käthe Kollwitz Made Pictures Talk, given by Annette Seeler, curator of Berlin’s Käthe Kollwitz Museum. The second, Käthe Kollwitz: Sharpening the Scythe and the Spark of Revolutionary Consciousness, on March 12, 2020, will be given by Louis Marchessano, senior curator at the Philadelphia Museum of Art. Marchessano is also the editor of a book published by the Getty Research Institute to accompany the exhibition: Käthe Kollwitz Prints, Process, Politics.

A related exhibition, Käthe Kollwitz and the Art of Resistance, will be presented at The Art Institute of Chicago from May 30–September 13, 2020.