Passchendaele: ‘I could taste their blood in the air’

BRITISH soldiers killed at Passchendaele were remembered yesterday on the centenary of the start of the WWI battle in Belgium.

More than half a million men from both sides were killed or injured in more than 100 days of fighting in the rain-sodden summer and autumn of 1917.

The Tyne Cot cemetery near the Belgian village is the largest Commonwealth burial ground in the world, with 11,971 servicemen buried and remembered there, 8,373 of whom are unidentified.

An account by Private Bert Ferns of the Lancashire Fusiliers, who fought in the battle, was read out by Fusilier Shaun Mclorie.

He said: “I staggered up the hill and then dropped over the slope into a sort of gully. It was here that I froze and became very frightened because a big shell had just burst and blown a group of lads to bits; there were bits of men all over the place, a terrible sight, men just blown to nothing.

“I just stood there. It was still and misty, and I could taste their blood in the air.”

This is a music video of a song from the British musical Oh! what a lovely war. About World War I. The lyrics are:

At 3:50 on the morning of July 31, 1917, the allied troops of Great Britain and France begin the so-called Third Great Flanders Offensive, also known as the Third Battle of Ypres. …

It becomes a grueling battle of attrition and a terrible slaughter that continues through November. For months, the ruins of a single location are fought over. For the first time, aerial battles take place involving more than 100 fighter planes. Only with difficulty does the German military command manage to replace the divisions which are quickly disabled.

Outnumbered and outgunned, the Germans overcome their disadvantage by using mustard gas for the first time, the barbaric chemical agent that burns the airways and skin within seconds. Professor Adolf Julius Meyer, the creator of mustard gas, later boasts: “The effect of mustard gas in the Flanders battle of 1917 grew more and more and it was often the case that the enemy was happy if he was able to keep a quarter of his men unharmed.”

The fighting lasts through mid-November. The military objectives of the offensive are not achieved. The only result—a relocation of the front line by 8 kilometers—is paid for on the British side with approximately 50,000 killed; 38,000 missing in action; and 236,000 wounded. On the German side, approximately 46,000 are killed and missing while 281,000 are wounded and seriously ill.

Irish poet Francis Ledwidge and Welsh poet Hedd Wyn are both killed during the first day of the Third Battle of Ypres.

Ledwidge, born in 1887, was associated with the Gaelic revival movement prior to the war, and he was also active in trade union circles. He tried and failed to establish a local club of the Gaelic League, a literary and cultural organization that promoted the use of the Irish language and was associated with the development of nationalism at the beginning of the 20th century. He was more successful in creating a local branch of the Irish Volunteers in Slane, the organization formed in response to the creation of the Ulster Volunteers to ensure the implementation of home rule for Ireland. Though Ledwidge initially sided with the minority of the Irish Volunteers, which, on the outbreak of war, opposed participation in the British army, he soon shifted his position and joined the military in October 1914.

Ledwidge’s poetry was influenced by rural life. He also responded to the radicalism of the 1916 Easter Rising, writing in “O’Connell Street”:

“A Noble failure is not vain
But hath a victory of its own
A bright delectance from the slain
Is down the generations thrown.”

Wyn, born Ellis Humphry Evans in 1887, is also killed near Ypres. He adopted the name Hedd Wyn, meaning blessed peace in Welsh, in 1910. His poetry drew heavily on the influences of the Romantic era, including themes of nature and spirituality, although he has also written several war poems since the conflict broke out. Wyn initially opposed the war on Christian pacifist grounds. He was conscripted in 1916 and then arrested by the military police in early 1917 after overstaying a period of leave at home. Wyn posthumously won an award at the National Eisteddfod, a festival of poetry and music, for his poem Yr Arwr.

Some of Wyn’s works have been translated, including the poem Rhyfel (War), which begins,

“Why must I live in this grim age,
When, to a far horizon, God
Has ebbed away, and man, with rage,
Now wields the sceptre and the rod?” 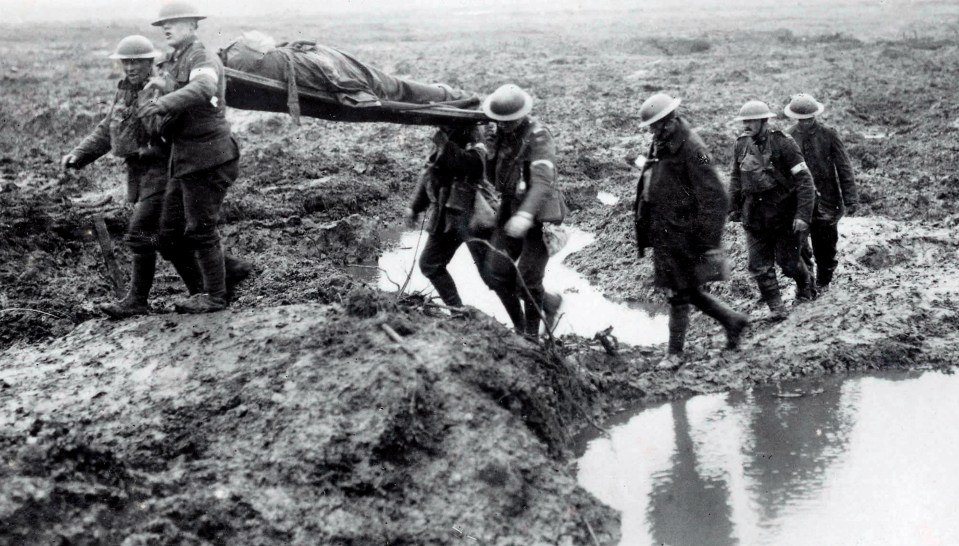 Passchendaele: They lied then, they lie now

An Irish soldier had gone over the top to attack the German lines in atrocious weather, glad to escape the “awful noise” of the field guns on the British side. He and his comrades had crossed blasted ground, where “trenches had disappeared, concrete emplacements had been overturned, breastworks had been flung like straws to the wind.”

Many of the so-called enemy had been buried alive along with their machine guns, trench mortars and bomb stores.

As Gibbs noted: “But there were other dead not touched by shell-fire, nor by any bullet. They had been killed by our gas attack which had gone before the battle. Rows of them lay clasping their gas-masks, and had not been quick enough before the vapour of death reached them.”

Over the following four months, half a million men and boys were killed or wounded in a series of brutal battles for five miles of Belgian mud.

In December 1917, Prime Minister David Lloyd George attended a private banquet where Gibbs recounted his experiences at the front in graphic, gory detail. The next day, Lloyd George confided to Guardian editor CP Scott the impact that this account would have on the home front: “If people really knew, the war would end tomorrow. But of course, they don’t know and can’t know.”

The press barons and state censors ensured that most civilians never did read the truth about the Great War between the ruling classes of the British, French, Russian and Italian empires on the one side and those of Germany and the Austro-Hungarian empire on the other.

As Lloyd George had gone on to say: “The correspondents don’t write and the censorship wouldn’t pass the truth. What they do send is not the war, but just a pretty picture of the war with everybody doing gallant deeds.

“The thing is horrible and beyond human nature to bear and I feel I can’t go on with this bloody business.”

But he and his successors did go on with this “bloody business,” not only in Europe but in Iraq, India, Malaya, Korea, Kenya, Aden, Cyprus, the Falklands and Afghanistan.

And still we are not told the truth. At yesterday’s commemorations, a procession of military figures, princes, politicians and priests concealed the real causes and motives of the 1914-18 slaughter in a cloud of guff.

They yapped about freedom, duty, courage, service and sacrifice — but uttered not a word about the war criminals who incited, organised and applauded one of the biggest and most pointless mass slaughters in history.

Fittingly, this was on the same day that the High Court threw out an attempt to hold Tony Blair, Jack Straw and Lord Goldsmith to account for waging the murderous war of aggression against Iraq in 2003.

Meanwhile in Ypres, ever ready to let slip the dogs of war, Defence Secretary Michael Fallon linked Passchendaele and the first world war to Britain’s present-day military commitments and alliances.

They are indeed connected, although not, as Fallon would have it, in some common, timeless struggle for freedom and democracy.

Rather, Britain’s foreign and military policy remains to make the world safe for big business profits, bringing troublesome peoples and governments to heel while monopoly capitalism exploits their human and natural resources.

We would best honour the victims of Passchendaele by redoubling our efforts to challenge British imperialism, its bloody interventions, its nuclear weapons of mass extermination and its servile Nato alliance with US imperialism.</blockquote

This was a great imperialist slaughter directed by Anglo-French and German imperialism to re-divide the world between themselves. The general staffs and the governments involved fought resolutely and determinedly down to the last worker in uniform in the struggle in which shell-shocked workers were executed for desertion or cowardice.

It was … the ruling classes of the planet determined to safeguard and expand their empires no matter how many workers’ lives this cost. The Second ‘socialist’ International collapsed at the start of the war and supported their own governments, displaying ultra-patriotism and an extreme willingness to sacrifice workers lives for the benefit of their particular empire.

There were exceptions however. In Britain, John Maclean, James Maxton and the Clydeside Workers Committee opposed the war. James Connolly did the same in Ireland. In Germany, the anti-imperialist war struggle was led by Karl Liebknecht and Rosa Luxenburg, with Liebknecht voting against war credits in the German parliament on December 2nd 1914.

He told the parliament: ‘I am voting against the War Credits Bill today for the following reasons. None of the peoples involved in this war wanted it, and it did not break out to promote their welfare – not in Germany or anywhere else. It is an imperialist war, a war to dominate the capitalist world market and secure for industrial and financial capital the possession of important territories for settlement.’

In the Russian socialist movement … Lenin saw the Great War as the prelude to the socialist revolution of the working class. He would not support the war of the Czarist autocracy and saw the war as a great opportunity for overthrowing Czarism, breaking up the Czarist Russian empire which he termed ‘the prison house of the nations’. …

In November 1918, the mutiny of the German navy at Kiel saw the red flag raised over the fleet and in fact ended the First World War. On November 3rd, the sailors in Kiel, joined by workers from the nearby city, detained their officers and took control of their ships. They also formed Elective Councils, their own ‘workers soviets’ that drafted the Kiel Mutineers list of demands, the first six points being;

1. The release of all inmates and political prisoners.
2. Complete freedom of speech and the press.
3. The abolition of mail censorship.
4. Appropriate treatment of crews by superiors.
5. No punishment for comrades returning to ships and barracks.
6. No launching of the fleet under any circumstances.

This is a music video of a song from the British musical Oh! what a lovely war. About World War I. It is a parody of What a Friend We Have in Jesus.

42 thoughts on “Passchendaele, World War I bloodbath of poets and other soldiers”