Greek island set to get all its energy from renewables

5. Mid of batteries that store energy and later deliver it to the grid of wind turbine on northern tip of Tilos island ++MUTE++

6. Tilt down of cables connecting batteries

7. SOUNDBITE (Greek) Spyros Aliferis, on-site project supervisor for Eunice Energy Group: “The innovation of this program and its funding lies in the batteries, the energy storage, that’s what’s innovative. The energy made by the wind turbines and the photovoltaics will be stored in batteries so that this energy can be used for the grid when there is demand.”

12. Various of Tilos mayor Maria Kamma working in her office

14. SOUNDBITE (Greek) Maria Kamma, Mayor of Tilos: “Another factor that prompted us to proceed with this project is that we do believe in renewable sources of energy, and our ability to totally end our dependence on gasoline as a fuel for electricity, which is very harmful for the environment. For many years now, Tilos has plotted a course that is dedicated to protecting the environment. We are seeking visitors, tourists actually, people who will visit our island who love the environment and want to protect it and nature as it was given to us.”

16. Aerial of rooftops in Livadia with solar panels and solar-powered water heaters ++MUTE++

18. Various of Delaporta getting things ready for guests

19. SOUNDBITE (Greek) Sevasti Delaporta, owner of Sea View Hotel: “I’m very optimistic about this project because there are few negative consequences, as a business, and for the guests of the hotel that I run. People are pleased with the service because they have no problems with their fridges and they have no problems with their air conditioning. They are happy, things are ok.”

20. Hotel guests having breakfast at the terrace

21. Aerial of hotels and houses along the seaside

22. Aerial of sea and small boat

23. Aerial of town of Livadia

25. Wide of main street with tourists and locals

27. Various of main square with bars and restaurants

28. Man walking in the street

30. Dutch visitor Eva Lemaier, who has been coming to Tilos every summer for 25 years

In the morning, the sound of bee-eaters on spring migration.

We went from Megalo Chorio to Livadia. 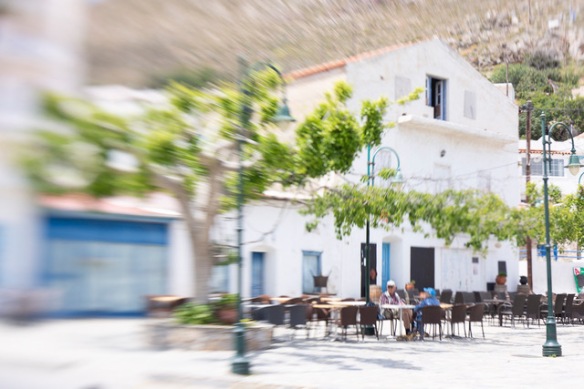 The photos from Livadia in this blog post were made, as an experiment, with a ‘lensbaby‘: a kind of camera lens enabling to make photos in which some parts are focused while other parts are not.

Hooded crows flying along the coast.

A cuttlefish bone and a dead sea star on the beach.

And, of course, the Aegean sea with its stones along the coast.