Before telling how we left Kos island in Greece after our 18 April 2019 arrival there, first this photo through an airplane window from just before our arrival: Greek Aegean sea islands to the north of Kos.

All photos of this blog post are made with a cell phone.

This June 2018 about the harbour of Kos island in Greece says about itself:

Kos City is the capital of the island, has the largest port and is the tourist and cultural center. Close to the harbour is the 14th century Neratzia Castle, built in 1315 by the Knights of St. John of Rhodes. In the center of the city is an old market place, an agora. The ancient Asklepieion is located between Kos Town and the Dikeos.

This February 2019 video says about itself:

We had a great trip from Rhodes to Kos. The ferryboat stopped in Chalki, Tilos and Nisyros. All places were amazing. Enjoy!

After our arrival on Kos island on 18 April 2019, our ferry traveled in the opposite direction: from Kos to Nisyros to Tilos.

This photo shows our ferry from Kos to Tilos.

I had crossed the Aegean sea once before: from Turkey to Lesvos island. I had seen Scopoli’s shearwaters and bottlenose dolphins then.

What would we see this time?

We did not see as much wildlife as that earlier time. Mainly a yellow legged gull flying just above the sea. This ferry was a catamaran, sailing much faster than the Turkey to Lesvos ferry. It was windy as well, making it harder to use binoculars.

The Aegean sea: in ancient times, there were various explanations for the name Aegean. The Athenians said the name referred to their King Aegeus, of 1000 BCE, or longer ago. When Aegeus was king, the son of King Minos of Crete was murdered in Athens. Hand over my son’s murderers to me, Minos demanded. But King Aegeus did not know who had murdered the Cretan prince. Then, King Minos said, once in seven years you have to send seven young men and seven young women to Crete. These young people were fed to the Minotaur, a half-human half-bull monster living in the underground Labyrinth in Crete.

Theseus, Aegeus’ son, wanted to stop this human sacrifice. When the ship to Crete had to sail again, he traded places with one of the seven young men. He told his father: I want to talk to the Minotaur to stop his killing. If the monster is unwilling, then I will try to kill it. If I succeed, and all fourteen young Athenians will be alive, then, when the ship will arrive again in Athens, its sails will be white. If the sails will be black, that will be a sign that the Minotaur has killed me and the others.

When Theseus arrived on Crete, King Minos’ daughter Ariadne fell in love with him. She said: Theseus, you are strong and courageous. Maybe you can kill the minotaur. However, then you and the other Athenians will still die. You won’t be able to find your way out of the Labyrinth. Therefore, I give you this ball of thread.

As Theseus entered the Labyrinth, he tied one end of the string to the door. He found the Minotaur and killed it. Then, he followed the thread out of the Labyrinth. All the young Athenians boarded their ship. So did Ariadne, who had saved Theseus’ life and whom he loved.

The ship landed on Naxos island to get drinking water. As Theseus slept, the goddess Athena woke him up. She said: You must sail early in the morning. And no, you cannot take Ariadne along. Naxos is the island of Dionysus, the god of wine. Dionysus has fallen in love with Ariadne. She will become Dionysus’ wife. 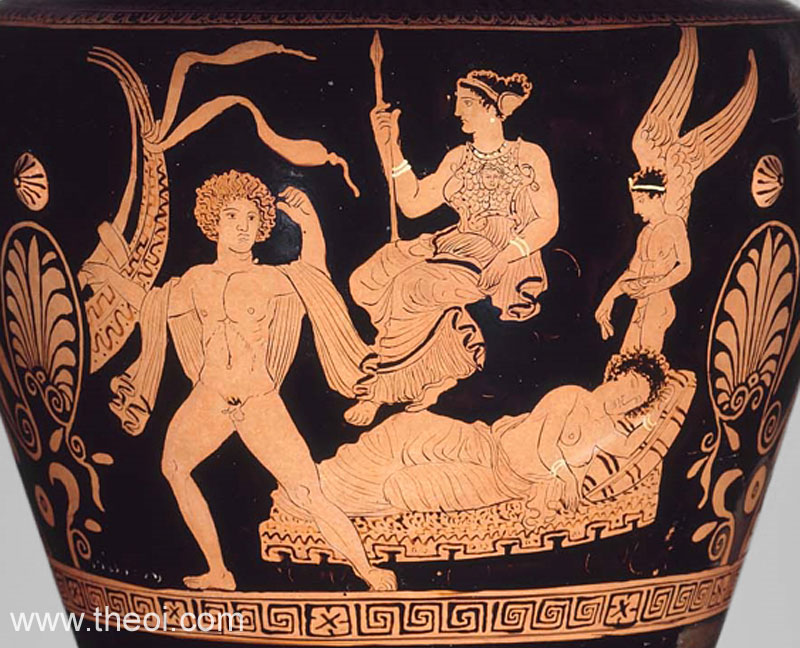 On this Greek vase painting, Athena tells Theseus (left) to go to his ship, leaving Ariadne. Hypnos, the winged god of sleep, makes sure that Ariadne does not wake up.

Theseus obeyed the gods. But he felt so sad that he forgot to change the black sails to white sails. In some versions of the myth, Theseus voluntarily abandoned Ariadne, not really loving her. However, then his forgetting to change the sails to white ones becomes unexplainable.

As the ship approached Athens, King Aegeus was on the lookout on Sounio cliff. He saw the black sails. ‘My son and the thirteen others are dead!’ In despair, Aegeus jumped into the sea and drowned. And that, according to the Athenians, is why we still call it the Aegean sea.

There is also another explanation, based on another person who supposedly drowned long ago. Aegea was said to have been a queen of the Amazons. She supposedly wanted to bring an army of women warriors from Libya to help the Trojans in their war against the Greeks. However, she drowned; and the sea where she died was named after her.

After about 90 minutes of sailing, our ferry-boat approached Tilos island.

We landed in Livadia, the harbour village of Tilos.