This 2015 video from the Netherlands says about itself:

The Mauritshuis museum in The Hague houses a world-famous collection from the Dutch Golden Age. At the unique 17th-century palace you can make the acquaintance of “The Girl with a Pearl Earring” by Vermeer, “The Goldfinch” by Fabritius and “The Anatomy Lesson” by Rembrandt. The Mauritshuis is a unique opportunity to see world-famous paintings by the Dutch Masters at one of Holland’s most beautiful locations.

This 2 April 2019 Dutch The Hague regional TV video says about itself (translated):

Is John Maurice good or not? That is the question that inadvertently arose when the bust of the founder of the Mauritshuis was removed from the museum in The Hague last year. The new exhibition Shifting Image (In search of John Maurice) will kick off on Thursday morning an extensive historical investigation into the past of the Field Marshal.

Translated from Dutch NOS TV today (quoting the same people as in the regional TV video):

In the history books, Maurice, who lived from 1604 to 1679, is usually presented as a hero. Yet he is not undisputed. This is mainly due to his past as a governor in Brazil.

The Mauritshuis itself writes on its site: “In terms of art history, the museum has always emphasised his importance to art, architecture and science. But Johan Maurits’s life story is also part of Dutch colonial history, particularly its role in the trans-Atlantic slave trade. …

This raises the question as to the extent we do justice to Johan Maurits’s Brazilian story if it we overemphasise the art-historical perspective. After all, he was the governor who in 1637 sent a fleet of warships to West Africa’s Gold Coast, present-day Ghana. The capture of the Portuguese-built Elmina Castle boosted the Dutch West India Company’s trading position in that area. Some years later, the island of São Tomé and part of the Angolan coast were also captured from the Portuguese – likewise on Johan Maurits’s orders – in order to increase Dutch trade in enslaved Africans. Thousands of men, women and children were shipped to Brazil. Johan Maurits personally owned dozens of enslaved people who lived and worked at his Brazilian court.”

This blog wrote earlier on this:

The new Dutch [slave] owners [in Brazil] found out that in order to maximize sugar profits, they had to import extra slaves from Africa.

To make that possible, they conquered the important Portuguese slave export port Luanda in Angola.

That made the Dutch major players in the trans-Atlantic slave trade, which they had not been until then.

In this way, war begot slavery, and slavery begot war.

According to historian Erik Odegard, who is leading the research, the focus will be on: “It is now clear that he personally played a role in the slave trade. Only we do not yet know exactly how large his share was or how many people it was. How much money did he make with it?”

John Maurice of Nassau-Siegen was born in Germany in 1604. He was a ruler in Nassau, Germany, field marshal in Dutch service and governor-general of Dutch Brazil.

That colony consisted of an area on the coast. There was a profitable sugar industry that depended on the labour of enslaved Africans. It was the first large plantation colony of the Dutch Republic.

After his return from Brazil, he moved into the Mauritshuis – then known as the Sugar Palace – in The Hague. He had already commissioned the construction in 1633. He housed his natural history and ethnological collection there.

46 experts made written contributions to the exhibition. From their own perspectives, they write how they view the past and the legacy of Maurice.

For example, Ashaki Leito (champion for the position of black women) is very happy with the portrait Two African men by Rembrandt van Rijn: “If you look at the other paintings, blacks are depicted as servants or slaves. But these are just two black men who have the right to be there.” 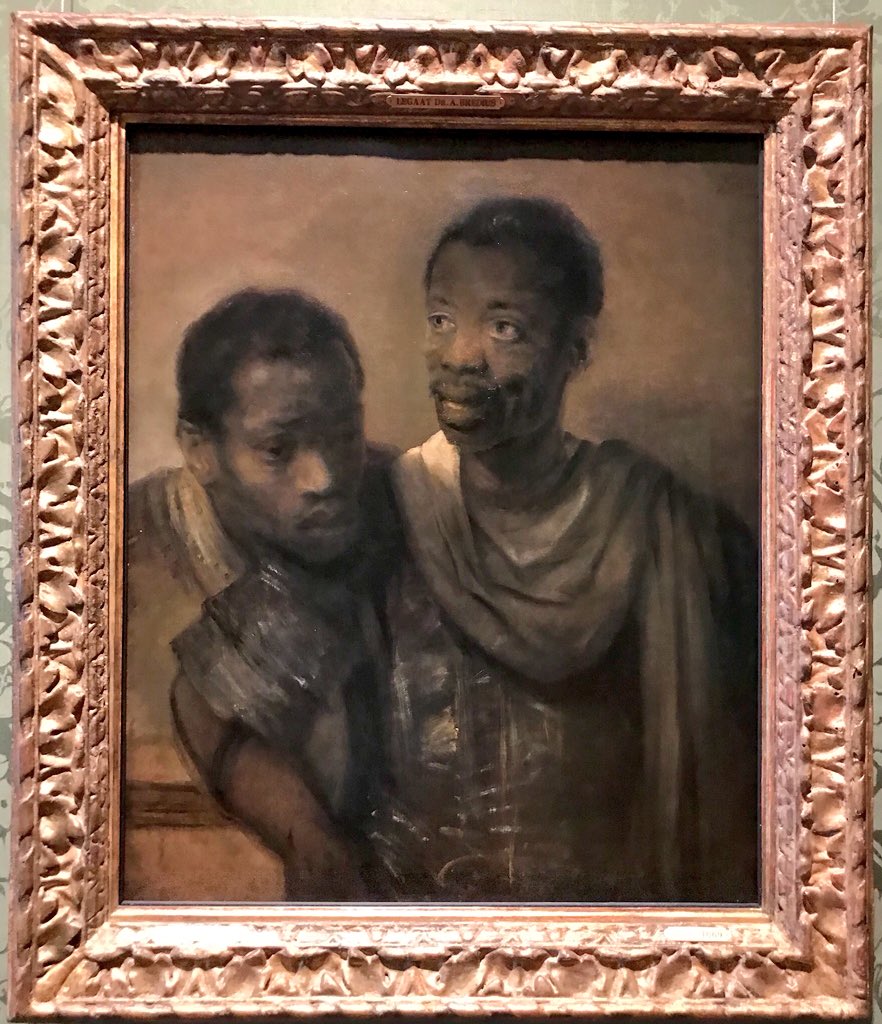 But Leito’s verdict on Maurice is anything but mild. She says to Omroep West regional broadcasting organisation: “Everyone can decide for themselves what they think of him. But I think he’s a criminal, a murderer, a villain. Someone we shouldn’t worship, but tell the right story about.”

Although slavery is therefore inextricably linked to Dutch Brazil, this is hardly reflected in the perception of John Maurice, writes the Mauritshuis.

“The governor of the colony has traditionally been commemorated for his love of art, architecture and science – and for his governance, which allowed a remarkable degree of religious freedom.”

Most slave owners in Dutch Brazil were Roman Catholic Portuguese. Making Roman Catholics second class inhabitants like then in the Dutch republic would endanger losing north-east Brazil to the Portuguese again.

4 thoughts on “Dutch Mauritshuis museum and its slave-trading founder”