This 1 July 2019 Dutch video is about new street names in Amsterdam, called after opponents of slavery and colonialism.

Translated from Nu.nl in the Netherlands today:

The streets in a new part of the IJburg district in Amsterdam are given the names of 27 people who fought against colonialism and who have drawn attention to the history of slavery. Mayor Femke Halsema said this during the commemoration of the abolition of slavery in Oosterpark.

These are, for example, Maria Ulfah, a feminist and lawyer from Indonesia, the Surinamese activists Otto and Hermina Huiswoud and the Curaçao writer Frank Martinus Arion. These people played a role in the resistance against colonialism or were nationalists, fighters for independence, authors or artists.

The list of street names has been drawn up by the Royal Netherlands Institute of Southeast Asian and Caribbean Studies and has been submitted for approval to the National Institute of Dutch Slavery Past and Heritage.

As far as I know, the names of the other 24 (or 23, if Otto Huiswoud and Hermina Huiswood each get their individual streets) people have not been published yet.

How radical will the Royal Netherlands Institute of Southeast Asian and Caribbean Studies dare to be?

Including Hermina and Otto Huiswoud sounds promising. As Otto Huiswood was not only an anti-colonialist leader of the association of Surinamese immigrants in Amsterdam, but also a founder of the Communist Party of the USA. Naming a street after him at a time when Donald Trump and his Secretary of State Pompeo are on a worldwide crusade against everything which looks even vaguely like socialism or communism, from Cuba to Venezuela, from Bernie Sanders in the USA to Jeremy Corbyn in Britain, shows at least some courage.

As far as I am concerned, more fighters from Suriname against slavery and colonialism deserve their own street in Amsterdam.

And Boni, eighteenth century fighter of the Maroons, African Surinamese people who had escaped from slavery.

And Frans Pavel Vaclav Killinger, who in 1910 attempted an uprising acgainst Dutch colonialism.

And Eddy Bruma, a twentieth century fighter for Surinamese independence.

As for Curaçao: Tula, leader of the 1795 slaves’ uprising.

And Wilson Godett, leader of a 1969 big strike against Shell corporation exploitation and racism.

As for Indonesia, will they dare to name Sukarno, the first president of independent Indonesia? Sukarno did not hate Dutch people or Dutch culture, but he did object strongly to Dutch rule over Indonesia. For decades in the Netherlands, profiteers of colonialism and white supremacists have depicted Sukarno as Satan incarnate. Naming an Amsterdam street after him would show courage.

UPDATE: they did not dare to name Sukarno. See also here. 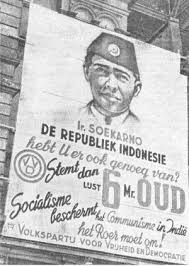 This is a poster for the elections for the Dutch parliament in 1948. Then, a bloody colonial war was raging. Indonesia had declared its independence on 17 August 1945 (now, the Indonesian national holiday). The Dutch government, mostly consisting of the social democratic PvdA party and the Roman Catholic KVP party, did not like to officially recognize that independence because of economic interests of Dutch multinational corporations. They tried to make Indonesia a Dutch colony, the Dutch East Indies, again, with military force.

The pro-capitalist VVD (the biggest party in the present Dutch coalition government) thought the 1948 PvdA-KVP government were not using enough force. Hence, this poster.

It says: “Engineer Sukarno [the first president of Indonesia]. The Republic of Indonesia. Do you have enough of it [in the sense of Are you sick of it] as well? Vote then for party #6 on the ballot paper, VVD, Mr. Oud. Socialism [meaning the PvdA ministers in the government] protects Communism in the Indies. This must change!” In this VVD propaganda, supporting independence for Indonesia supposedly automatically made one a communist. Even if, like President Sukarno, one was not a member of the Indonesian communist party, but of the nationalist PNI party. Or of some other of the many Indonesian parties supporting independence. Or not a member of any party. That is why the VVD depicted Sukarno with a communist hammer and sickle symbol on his hat.

As for other candidates for anti-colonialists from Indonesia: Pattimura, 19th century fighter from Amboina island.

And how about D.N. Aidit , or another Indonesian communist? What would Trump say?

Or Haji Mohamad Misbach, who was both an Islamic preacher and a communist? Two reasons for Trump to hate him. He died in a Dutch colonial concentration camp on New Guinea island.

Or the author Pramoedya Ananta Toer.

‘Amsterdam must become the city of everyone’

The mayor said that during Keti Koti [commemoration of the abolition of slavery in Suriname], horrors are commemorated, but it is also stories about heroes who led resistance to slavery. In Suriname, on the Caribbean islands and in the Netherlands.

“We want Amsterdam to become everyone’s city”, Halsema said. “In the coming years we want to make a leap forward. The city is growing. And in our growing city, new stories must be able to find their central place. Even if they are painful.”

To get there, according to Halsema, Amsterdam still has a long way to go: “By investigating the significance of slavery in the local economy, by creating a slavery museum in Amsterdam. And by taking responsibility.”

In her speech, Halsema discussed the role of Amsterdam in the history of slavery. “The city where merchants made money from trafficking in people and invested in plantations. The city that co-owned the Suriname Society, the company that controlled the colony until the end of the eighteenth century. Or like a researcher as early as the eighteenth century concluded: in Amsterdam there was no one who did not earn any money from slavery.”

There was an earlier proposal to name the streets after 16th-17th century Dutch admirals (some of whom were involved in the slave trade). This proposal met with much resistance. Also, there are already two neighbourhoods in Amsterdam with streets named after these sailors.