This 15 December 2018 video from the USA says about itself:

Striking Los Angeles teachers had a huge rally in downtown Los Angeles. The president of the union gives reasons for the strike.

This 15 December 2018 sequel video from the USA is called A huge crowd marching in downtown Los Angeles in support of the teachers’ strike for better conditions.

Los Angeles teachers and supporters speak out at mass rally

Reporters with the World Socialist Web Site were warmly received by dozens of teachers and their supporters at a mass rally in downtown Los Angeles on Saturday. The event marked a significant turning point in the struggle against the attacks on public education both in the United States and internationally.

Between 30,000 and 50,000 teachers and their supporters arrived to express their opposition to school cuts and the growing social crisis, which finds countless expressions within the classroom.

As teachers made clear, they found it impossible to separate their struggle for better wages and classroom funding from the overall social crisis affecting millions of student youth. …

Among the teachers spoken to by WSWS reporters, many lamented the fact that while youth should spend their time in school cultivating their minds, they instead must contend with overcrowded classrooms, deteriorating school sites, lack of school nurses, librarians and a whole host of issues that are the direct product of decades of funding cuts.

Elena Kelly is originally from Spain and has taught in the Los Angeles Unified School District (LAUSD) for 30 years. She began her career as an elementary school teacher and has taught Spanish at Marshall High School for the past three years. 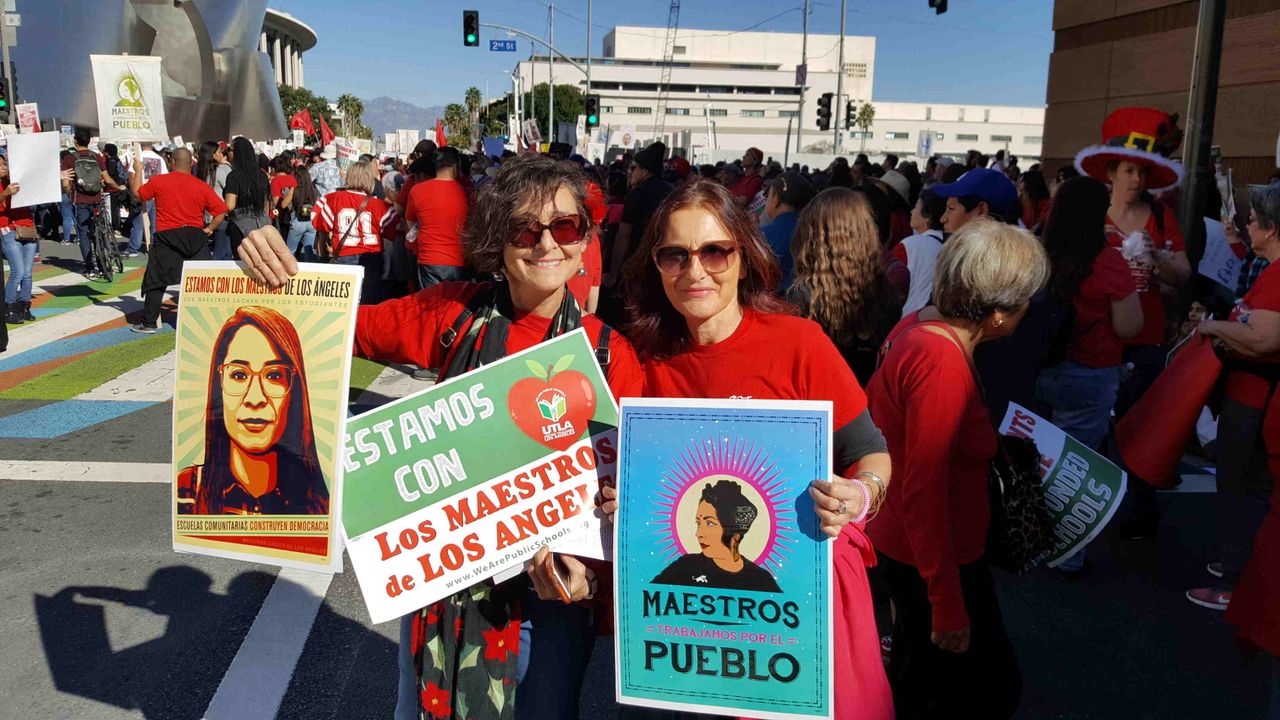 “Over time, things have gone from bad to worse”, she said. “It’s going to hell. Class sizes, working conditions, everything is going to hell. It’s almost to the point where I want to retire, and I love teaching. There’s disrespect at every level. We should be treated with respect. We shouldn’t have to listen to businessmen and capitalists tell us how to educate children. What do they know? If we privatize everything, which is what they’re trying to do, it will all go to hell.”

Howard Stone had been an LAUSD teacher for 17 years and has recently retired. He told our reporters that he’s a reader of the World Socialist Web Site. He particularly liked the series on the CIA Democrats in which the WSWS exposed the direct takeover of the Democratic Party by more than 40 former and current high-ranking members of the military and intelligence agencies running for national office last November.

“Conditions got progressively worse during my time as a teacher in LAUSD”, Stone said. “The whole corporate takeover that’s going on finally made me leave, I couldn’t take it anymore. It’s the adults that drove me out, not the students. The imposition from the top on everything, the lack of critical thinking. Nowadays, when I meet substitute teachers that tell me they’re considering getting a credential, I tell them not to, that things are just getting worse and worse for teachers.”

When asked about the larger role of the Democrats in the attacks on public education, Stone had this to say: “The thing with [Democratic California Governor] Gavin Newsom is that he’s like a Governor Macron or Governor Obama, he only speaks for the rich and the financiers. I strongly opposed Newsom and was so upset when the UTLA endorsed him for governor.”

Cynthia North is a French teacher currently working in the suburb of Panorama:

“I’m so disgusted with the lack of respect for public education. My current school is 98 percent Latino, and I have watched since 2016 the unending trauma that my students have endured. I now teach in between trauma, teaching comes as secondary to dealing with my students’ emotional well-being.” 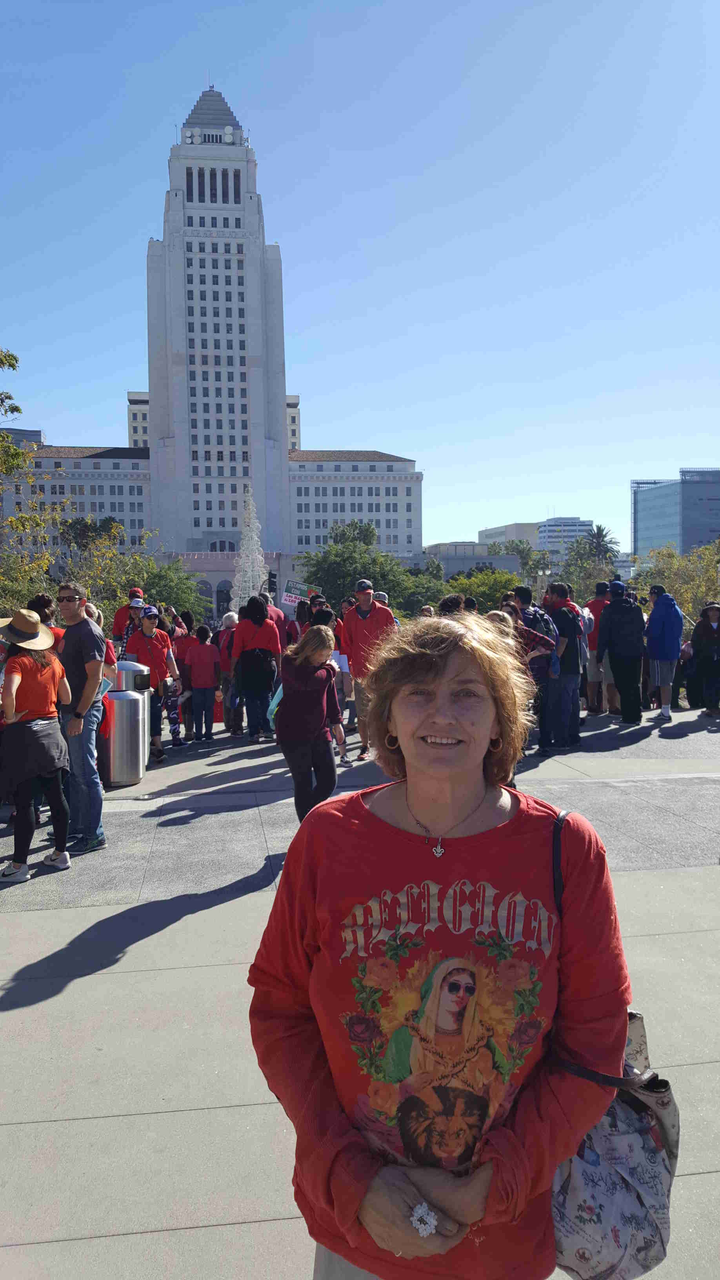 David Singer is a first-year teacher at Tarzana Elementary who also stated that he was a reader of the World Socialist Web Site. “I haven’t met one teacher who wasn’t going above and beyond to help their students in so many different ways”, he said. “Teachers are slandered in the media, but we’re powerless to affect the conditions outside of school, the socioeconomic and cultural conditions that our students face. It’s a systemic crisis.

“We’ve heard regular stories of parents keeping their students at home out of fear of deportation. This has led to so many drops in attendance among our students. The young girl’s death at the detention center is horrible and deeply tragic. It points to the inhumanity of the Trump administration.”

When asked about the mood among teachers to strike, Singer said, “I really appreciate and respect the solidarity among teachers. We’re 100 percent ready to strike at any site.”

Jill Fink is a teacher at Woodlake Elementary who has taught for 23 years: “My ancestors came from Europe, Jewish immigrants looking for religious freedom and opportunities for their children. I became a teacher because I wanted students to have a better life. Public education is pretty much the only thing which is really for everyone. No matter your background or family, you have the right to a good education.”

Zoe, a parent at the demonstration supporting teachers, said, “It’s very important to support public education. Teachers should be paid a lot more than they are now. Particularly with the Trump administration, teachers have to deal with how every problem in our community affects kids. They’re here for kids in poverty, homelessness, refugees, just any kind of trauma. This generation and the next are worse off than the ones before and that’s probably the first time that happened.”

The WSWS spoke with Jeanine Rittenberg, a school nurse, who was holding a sign reading: “My students deserve a nurse every day. Less testing and more learning.” She came as part of a delegation from Hubbard Elementary School. 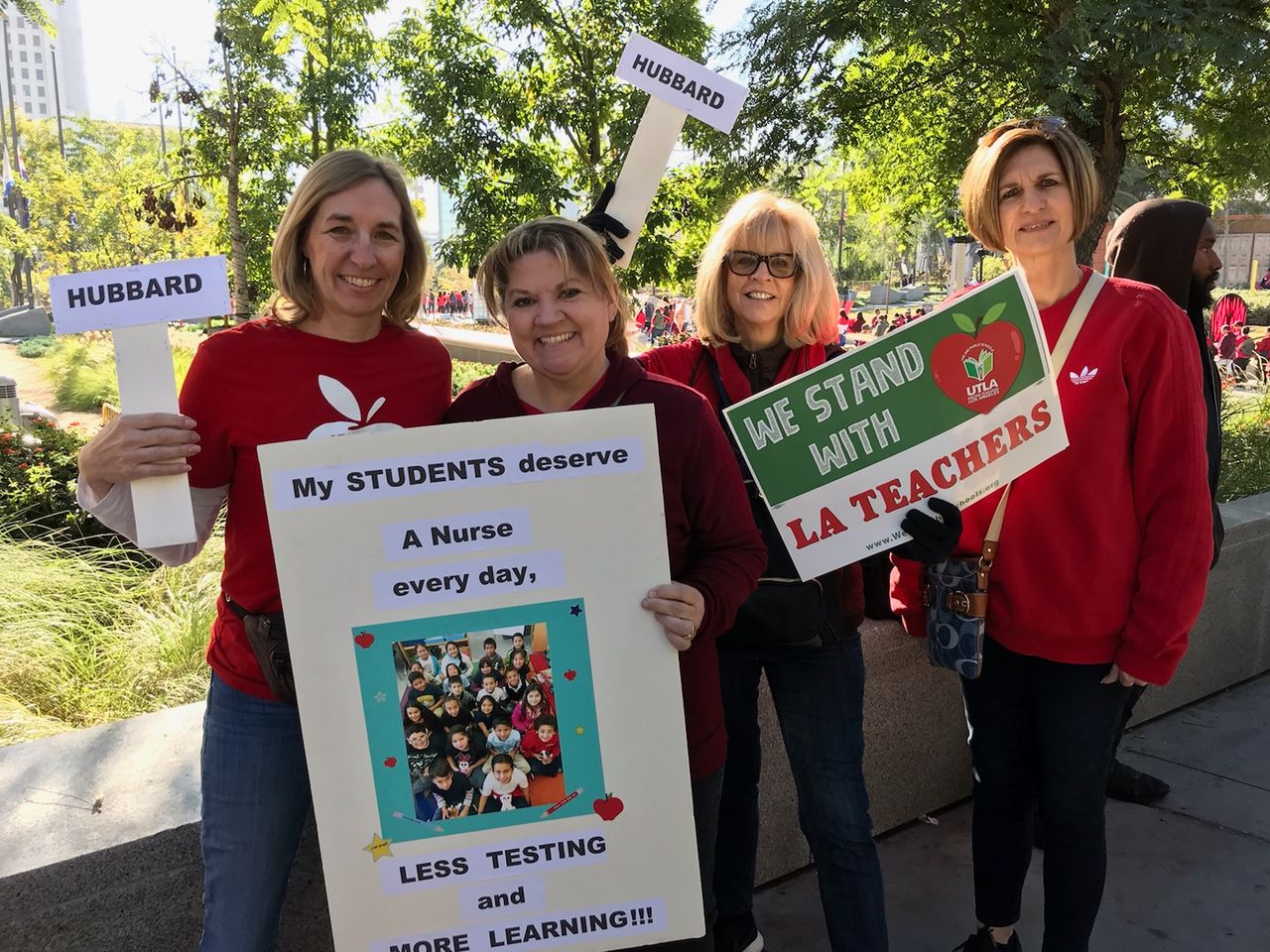 “We have 600 kids. Some have asthma, diabetes and spina bifida. There are several in wheelchairs and one student has a trachea. Then there are the everyday things like broken arms and pink eye. Lice is a huge one. Once that starts, it goes rampant, and you have to personally check every student’s hair.

“So being there only one day a week is outrageous. They need me every single day.

“We’ve been in negotiations for 20 months. We give so much of ourselves to our students every day, every year. I think it’s horrible that we’re not being supported by our own superintendent.”

Craig Gross has been teaching for 32 years. He teaches science at Foshay, a K-12 school with 2,200 students: “We’re trying to make it safer for our students. Most classrooms, especially the high school classes, have 40 or more students. Our nurse, psychologist, and social worker are all part-time.”

Liz Velasquez held up a sign that read: “All schools should have a Teacher-Librarian and updated school library materials.” She told the WSWS, “I’m a teacher-librarian at a magnet school in South LA with 1,600 students. It is very overwhelming. The normal ratio is one librarian to 800 students. I have double that, and I’m running a very tight schedule. 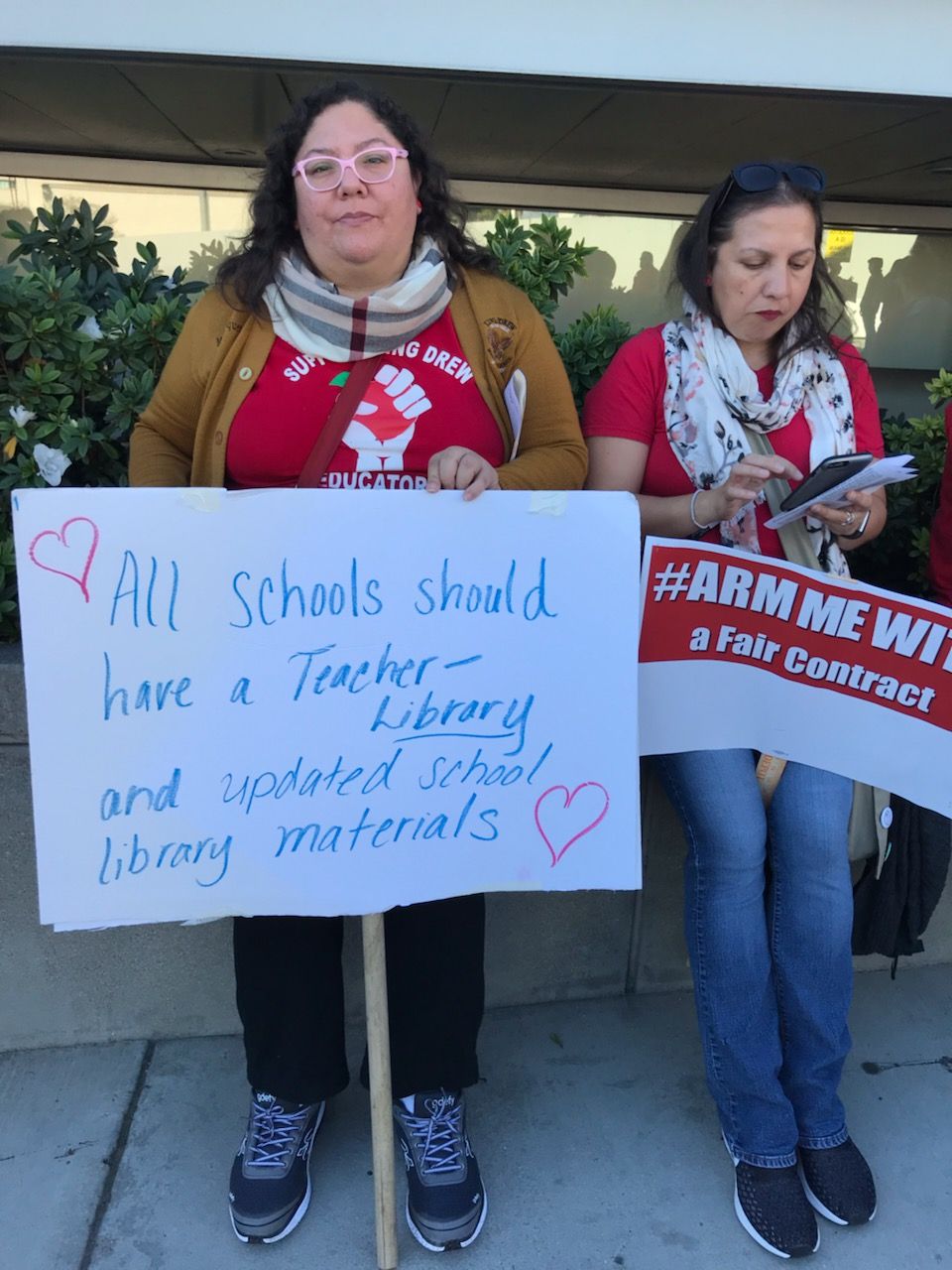 “Not only do I need to work with every class that comes to the library, showing them how to check out books and also do research. For the kindergarten classes, I personally visit each one, read stories and get them excited about reading.

“I also have to update the material, buy new books to support the curriculum and topics. I work with all the teachers. Most of the books were published in the late 1990s and early 2000s.

“During the last big layoffs because of the recession, a lot of librarians were let go. Recently they had to shut down the library for a whole month because of mold. The library is supposed to be a safe place for students where they can have resources to support their projects.

“There should be fully stocked and fully staffed libraries in every school. Librarians support the teachers because we help build literacy skills and also give the teachers a break during their busy days. We customize our teaching to help the classroom teachers, whether focusing on poetry, nonfiction, research. Some people don’t realize that we are teachers as well, not just helping kids check out books.”

Our reporters also spoke to another school nurse who explained her experience in LAUSD. Zabrina has worked for the district for several years. “I’m called throughout the day to go from one school to another to take care of students”, she said. “There’s a shortage of nurses and we’re spread extremely thin.” 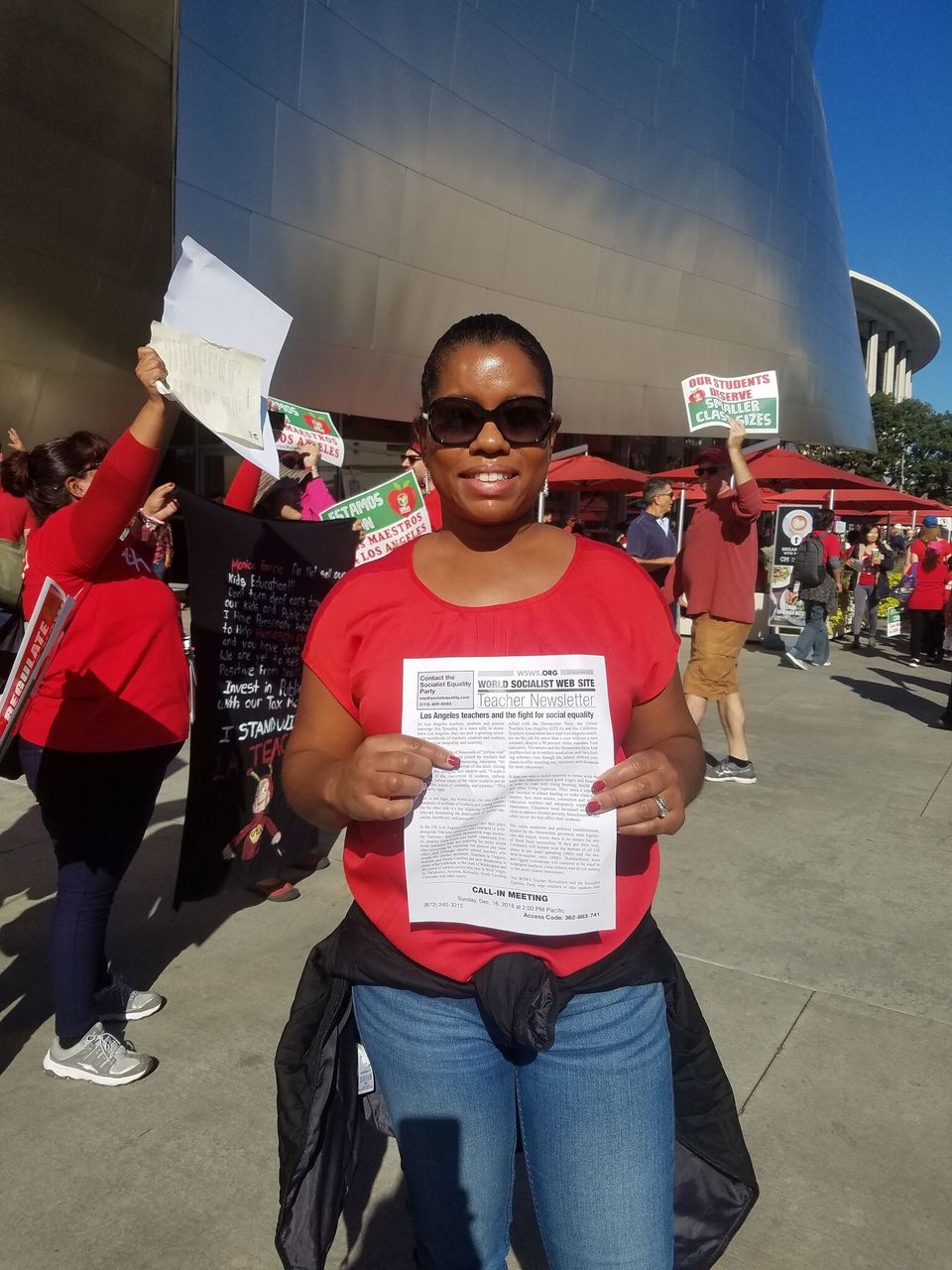 Commenting on the amount of money that is instead allocated for war and the military, Zabrina said, “The problem is that it doesn’t help our students, our children. The conditions in which we work aren’t good. Money is being put in the wrong place instead of what our students need.

“I work in poverty areas where kids have a lot of needs. Some of these children don’t have any medical care outside of what they get in school. That’s why it’s important that there’s a school nurse in every location.”

Elaborating on the question of poverty, Zabrina said, “A lot of the kids don’t have what they need at home and when they come to school they should find a safe place and in order for them to learn and engage they have to be healthy. If the school cannot satisfy their basic needs, that says it all.

“There are the haves and the have nots. It’s turned into that type of situation. There is really no middle anymore. Social inequality has increased especially here in Los Angeles.”