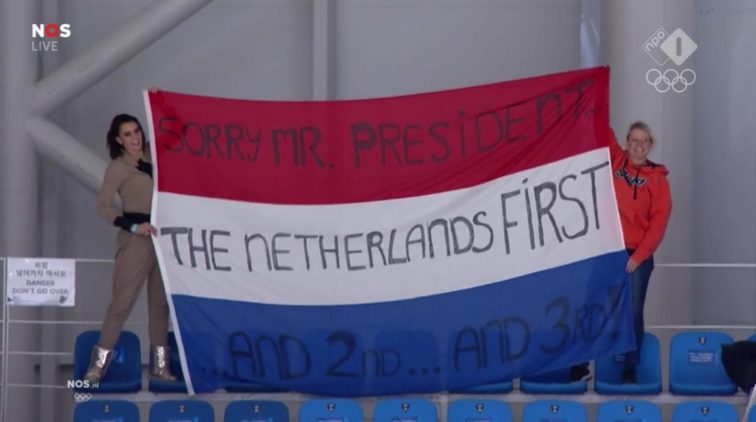 Today, the speed skating races of the Winter Olympics in Korea started. The Dutch fans on this photo were at the first race: 3000 meter for women.

In that match, all three medals, gold, silver and bronze went to Dutch skaters.

The fans had predicted that well on their banner. The sign jokes about United States President Trump‘s ‘America First policy‘.

Sometimes, sports authorities ban political allusions by spectators. Good that that did not happen with this banner in Korea.

This is a Dutch video with speed skater Carlyn Achtereekte; of 8 February 2018, two days before she became the surprising gold medal winner.

This video is about today, about Ms Achtereekte winning gold, and her two Dutch team mates silver and bronze.

In a show of unity, athletes from North and South Korea marched at the Winter Olympics‘ Opening Ceremony under the same flag. But the Trump administration is doing its best to thwart hopes for peace on the peninsula, says Christine Ahn of Women Cross DMZ.