We may have confirmation of Donald Trump’s Vice Presidential running mate. Spoiler: Mike Pence is not a good guy. Cenk Uygur, host of The Young Turks, breaks it down. Tell us what you think in the comment section below.

Meanwhile, this no longer a rumour, but a fact.

as his potential vice presidential running mate, after much consideration. That could result in a disaster if Pence’s record for PR failures is any indication.

Mike Pence is one of the Koch brothers’ favorite elected leaders. Support from the Koch brothers and conservative donors are a major component in a presidential run, so having the major money people’s favorite guy at your side if you’re new to politics is certainly helpful for campaign cash. Americans for Prosperity has been holding up Mike Pence’s work in Indiana as a paragon of a good governor. Pence’s former chief of staff now runs the Koch’s political group Freedom Partners. Given the fact that the Koch’s have pledged to spend $1 billion in the 2016 election to support conservative candidates, his ties could be an asset to Trump as he realizes his own financial limitations.”

Mike Pence Once Encouraged Obama Administration To Take Action In Libya. Donald Trump’s vice presidential pick once praised Hillary Clinton for her handling of the chaos in Libya during the early days of civil unrest there and encouraged the Obama administration to take aggressive action in the country: here. 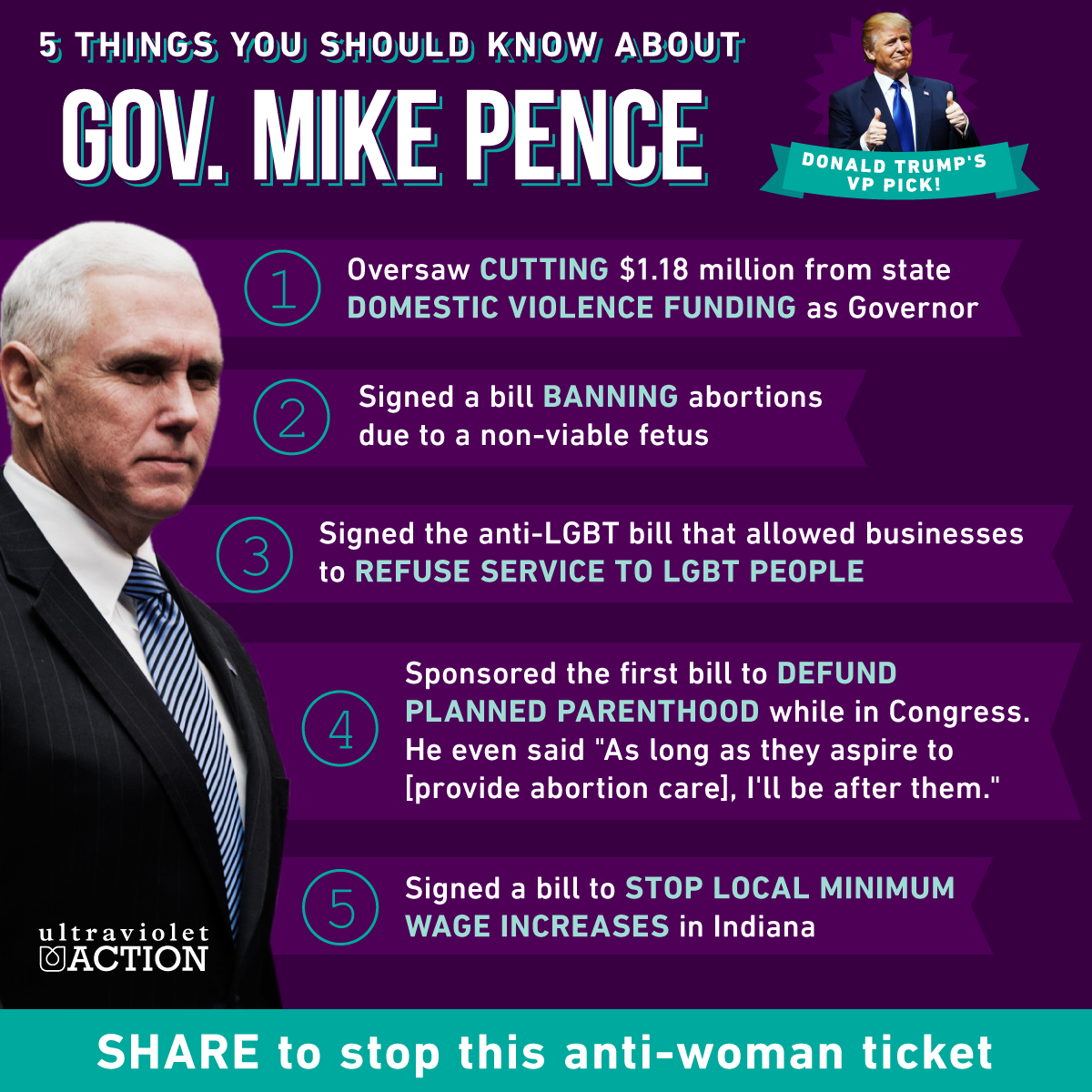 On April 10, 2015, Mike Pence sent a letter to Indiana’s congressional delegation asking them to vote for trade promotion authority (TPA) legislation, the Trans-Pacific Partnership (TPP) trade deal and the Trans-Atlantic Trade and Investment Partnership (TTIP): here. While Donald Trump in his presidential campaign claimed to be an opponent of TTP and TTIP. Will Trump flip-flop on this, like he has flip-flopped on so many other issues (and like Hillary Clinton has done)?

EIGHT WAYS DONALD TRUMP AND MIKE PENCE HAD TO COORDINATE OVER THE WEEKEND From TPP to the Iraq War, this pair has some differences. [Howard Fineman, Jason Linkins and Lauren Weber, HuffPost]

Why Mike Pence’s Nomination Is TERRIBLE For Women

Trump’s running mate instituted some of the most restrictive reproductive rights laws in the country. Cenk Uygur and Ana Kasparian, hosts of The Young Turks, break it down. …

“When Indiana Governor Mike Pence passed one of the nation’s most restrictive anti-abortion bills, Hoosier ladies trolled him by calling him up and talking about women’s health and Auntie Flo.

Indiana Governor Mike Pence could be the next vice president of the United States, if he edges out the other names on Donald Trump’s rapidly-shrinking VP shortlist—but he’s probably not the guy to solve Trump’s “women problem.” That’s because Pence has supported, sponsored, and signed some of the country’s most extreme anti-abortion legislation in the past decade.

In March, Pence signed a bill that, among other restrictions, bans abortion sought because of a fetal anomaly like Down syndrome and requires abortion providers to bury or cremate fetal tissue. Indiana is the only other state besides North Dakota to ban abortion motivated by fetal anomaly—a provision that a federal judge has already deemed unconstitutional.”

Some 100 graduates walked out in protest as Vice President Mike Pence took to the podium to make his commencement speech at the University of Notre Dame in South Bend, Indiana on Sunday: here.

Pastor Would Vote For ‘Strongman’ Trump Over Jesus

A right-wing Texas megachurch pastor admits he’d vote for Donald Trump over Jesus — who he accused of being weak on terrorism.

Robert Jeffress, pastor at 12,000-member First Baptist Church in Dallas, has been a vocal supporter of the presumptive Republican nominee — who he believes is the only candidate who can defeat Hillary Clinton.

Planting Peace, the nonprofit organization behind The Equality House, a rainbow-colored house that sits across the street from Westboro Baptist Church, is calling out Donald Trump and the Republican Party in a massive billboard that went up on Thursday in Cleveland, Ohio, where the RNC will take place next week. The billboard, below, shows an illustration of Trump poised to kiss Ted Cruz beside a caption that reads “Love trumps Hate. End homophobia”: here.