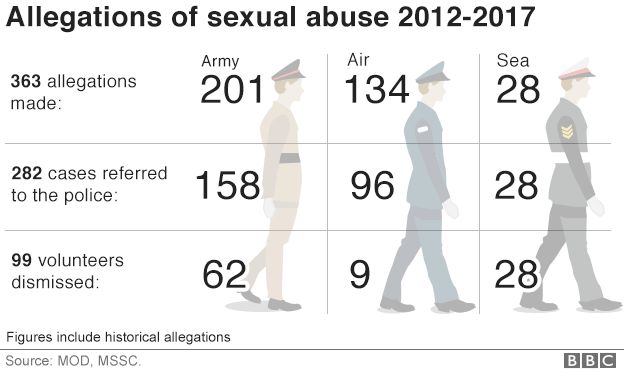 From the BBC in Britain today:

Sex abuse was covered up at cadet forces, Panorama finds

Victims have spoken for the first time of senior cadet leaders covering up complaints, and pressurising families against going to the police.

Overseen by the Ministry of Defence, the cadets is one of the UK’s largest youth bodies with 130,000 members.

The MoD has paid more than £2m to cadet abuse victims, and says it has “robust procedures in place to protect cadets”.

According to Freedom of Information requests, in the last five years 363 sexual abuse allegations – both historical and current – have been made across the UK for the Army, Air and Sea Cadets.

Some 282 cases have been referred to the police and 99 volunteers have been dismissed.

Panorama’s seven-month investigation focused chiefly on uncovering a pattern of historical abuse – conducted by a number of different cadet leaders – in Glasgow, Birmingham and Hertfordshire.

Martin was 12 when he was “systematically abused and raped repeatedly over many years” by his commanding officer Brian Leonard, at Tennal Grange cadet base in Birmingham.

“That includes having to lie on the floor on a dirty blanket and just lie there and… take it like a man.”

Panorama has spoken to 10 men who were abused by Leonard in the 1980s.

Martin says: “The thing was it was so blatantly obvious, it was almost as if it was hidden in full sight.”

A girlfriend of one of the victims (who has chosen to remain anonymous) threatened to report Leonard to the police in 1987, but cadet officers pressured her to keep quiet.

The sergeant said he would take a statement from her, but warned her not to approach the police. No investigation into Leonard was ever carried out.

Tony was 14 when he joined Cheshunt Sea Cadets, in Hertfordshire, in 1979.

He said he woke to find his commanding officer Allan Waters at his bedside while he was on a weekend trip away.

Terrified of returning, he told his parents – whose complaints were met with a home visit from two Sea Cadet officers, in full uniform.

Tony’s parents were dissuaded from approaching the police by the officers and in return for not taking matters further, they were promised that Waters would be moved from looking after children.

But Panorama has discovered that he was not dismissed or even suspended – he was, in fact, promoted and moved to a division in North London where he was in charge of 10 Sea Cadet units.

What’s more, concerns by other members of the corps after this appointment were dismissed by the very top – the Captain of the Sea Cadets – who said the allegations were “thoroughly investigated” and “not proved”.

Waters was later convicted for separate child abuse offences in India in 2006 and placed on the Sex Offenders Register.

Panorama has found out that despite this, until March 2017 he held a title in a naval veterans’ organisation – as honorary secretary of HMS President Retired Officers Association.

‘Stuck in my mind’

Joe joined the Glasgow Highlanders Army Cadets in 1988 when he was 11. His Commanding Officer, John Fitzpatrick, would invite cadets to his flat, ply them with alcohol and sit them in front of pornographic films before bedtime.

Joe told Panorama: “I mean real hardcore stuff that I’ve never seen since I was in that guy’s company…

“Images that have stuck in my mind to this day… if anybody had put images like that near my kids, I’d want to kill them.”

On four occasions, Joe woke up to find Fitzpatrick sexually assaulting him.

Panorama has discovered that before Joe was abused, another cadet instructor – Gordon – had received complaints that Fitzpatrick had sexually assaulted another boy.

There were two young witnesses. Gordon went straight to the police, but instead of being congratulated his boss was furious.

The case went to trial – but Fitzpatrick was found “not proven”. He was welcomed back into the cadets – taking up the position of CO again.

However, last year, Fitzpatrick was charged with lewd and libidinous behaviour against Joe and three other boys. This time the case was proven and he was sentenced to two years in prison.

The Birmingham case was one of the first cadet cases taken on by David McClenaghan, a child abuse solicitor from law firm BBK.

The National Association for People Abused in Childhood (Napac) says no sphere of society is immune.

She added: “The onus is now on institutions such as the armed forces to deal fully and promptly with reported allegations.”

For information and support for anyone affected by sexual abuse (current or historic) – including sources of support for children, young people and concerned parents – please see the listings on BBC Action Line.

Contact BBC Panorama – Do you have a story or information about any abuse/cover up related issue within the cadet forces which you want to share with BBC Panorama?

Please email the team at: cadets@bbc.co.uk

Watch BBC Panorama – Cadet Abuse Cover Up on Tuesday 4th July on BBC One at 22:45 BST, and in Northern Ireland at 23:10 BST and 23:45 BST in Scotland and afterwards on BBC iPlayer.