The second of two globally organised anti-war marches opposed to the invasion of Iraq by the United States, Britain and Australia.

By John Braddock and Tom Peters in New Zealand:

Two four-year museum exhibitions opened last weekend in Wellington as part of the government’s celebrations of the centenary of World War I. The multi-million dollar exhibitions—The Great War Exhibition and Gallipoli: The Scale of Our War—were designed by Lord of the Rings director Peter Jackson and his collaborator Richard Taylor, founder of the special effects company Weta Workshop.

The exhibitions were officially opened along with the new $120 million Pukeahu National War Memorial Park. This includes a monument funded by the Australian government to celebrate New Zealand and Australian involvement in imperialist wars, including the Boer War, both World Wars, Malaya, Korea, Vietnam, Afghanistan and Iraq, and the occupations of East Timor and the Solomon Islands.

The park and exhibitions, described by the Dominion Post as “the greatest World War I show on Earth,” are at the centre of a five-year centenary program. Their purpose is to rewrite the history of the war in order to glorify New Zealand’s involvement and condition the population to accept today’s imperialist interventions and wars.

This agenda was made clear by Australian Prime Minister Tony Abbott, who visited Wellington on Monday. According to the New Zealand Herald Abbott “several times made pointed comparisons” between the Anzac (Australia and New Zealand Army Corps) campaign 100 years ago and the present-day participation of what he called the “sons of Anzacs” in the US-led war in Iraq.

Amid widespread public opposition to the Iraq war and the celebration of WWI, Jackson attempted to sanitise the purpose of his Great War Exhibition, which purports to depict the history of the Western Front. “It is not an anti-war museum,” he told the media, “it’s certainly not a glorifying war museum. It’s just showing reality.”

In fact, the exhibition is not an objective history of WWI. It largely has the character of an army recruitment display, particularly aimed at children. Former Defence Force chief Lieutenant General Rhys Jones, the exhibition’s executive director, told the Dominion Post that Jackson “wants every kid who comes through here to be excited and to be in wonderment about everything they’ve seen.”

It begins with a reproduction of a pre-war Belgian village—falsely implying that Britain and its allies entered the war to defend Belgium from the German invasion. Visitors are surrounded by propaganda posters from Britain, France and the US, all presented entirely uncritically.

The exhibition contains a large amount of weaponry, including artillery, machine guns, shells, uniforms, a tank and other memorabilia, some of it from Jackson’s private collection. There are detailed trench reproductions but few graphic depictions of the dead and maimed soldiers.

According to Jackson, WWI was “a hopeless war … It was war for no reason.” This is a complete historical falsification. As Trotsky wrote in the Zimmerwald Manifesto, the war was “the outcome of imperialism, of the attempt on the part of the capitalist classes of each nation to foster their greed for profit by the exploitation of human labour and of the natural resources of the entire globe.”

Both world wars were the product of the intractable contradictions within the capitalist system, between the development of global economy and its division into antagonistic nation states, in which the private ownership of the means of production is rooted.

As a junior partner of British imperialism, New Zealand’s ruling class joined WWI to expand its wealth and seize more Pacific island colonies. The invasion of German Samoa, which was New Zealand’s first action in WWI, is not mentioned in either of the Wellington exhibitions. In the course of the war, 18,500 New Zealanders died and 40,000 were injured, out of a population of about one million.

Both exhibitions are virtually silent on the widespread opposition to WWI internationally. The exception is a reference in the Great War Exhibition to opposition among the American working class, which delayed Washington’s entry into the war. The wall text then quotes US President Woodrow Wilson’s cynical declaration in April 1917 that “America would ‘make the world safe for democracy’ by joining ‘the war to end all wars.’”

There is no reference to the class struggles against conscription and war, including protests and mass strikes throughout the world. The upsurge prompted the 1916 founding of the NZ Labour Party by the trade unions, which aimed to divert the anti-war movement into safe parliamentary channels.

The Great War Exhibition makes no mention of the Russian Revolution. The overthrow of capitalism by the Russian working class, led by the Bolsheviks, inspired workers internationally and forced the warring powers to agree to an armistice to prevent the revolution from spreading. The display falsely presents the armistice as simply a military victory by the Allied powers. 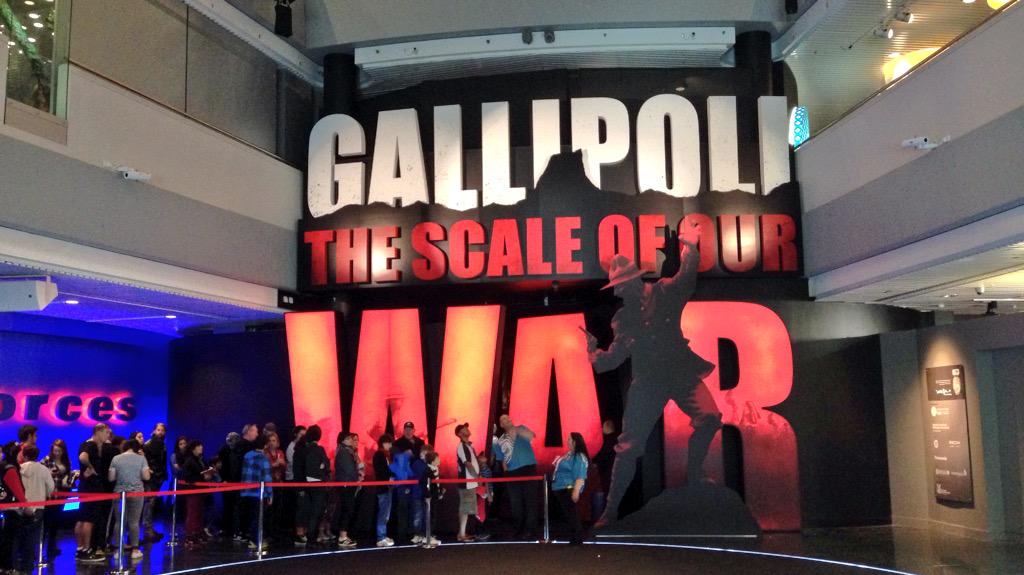 The second exhibition, Gallipoli: The Scale of Our War housed at the national museum Te Papa, is an intensely nationalistic depiction of the Allies’ failed attempt to invade Turkey.

In both Australia and New Zealand the catastrophic battle of Gallipoli has been portrayed by successive governments as a pivotal moment in the forging of a “national identity” and values such as “mateship.” The April 25 holiday, Anzac Day, marks the landings at Gallipoli.

Both exhibitions concentrate, according to Jackson, on the purported “experiences” of men who “were there.” The Gallipoli exhibition makes little attempt to provide any historical context. There is cursory acknowledgement of the Ottoman death toll—which numbered 86,692, more than 30 times New Zealand’s 2,779. The focus is a distorted picture of what New Zealand soldiers experienced and felt during the battle.

Visitors are immersed in New Zealand soldiers’ “experience” of the battle, with depictions of fighting, disease and squalor. The exhibition uses sculptures, computer animation, photos and selections from letters, diaries and memoirs. Some excerpts praise the Turks’ bravery, while others dehumanise them.

The wall text asserts that New Zealanders greeted the war as a “great adventure” and that “we were keen to do our bit for the empire.” Several quotes from soldiers have been chosen to reflect these excited and patriotic sentiments. Others describe the horrors of the battlefield or the grief of losing a relative but there is almost no hint of opposition to the war itself.

The curators place special emphasis on glorifying the involvement of Maori soldiers at Gallipoli, despite being forced to admit that large numbers of Maori refused to join the army. They do not mention that about 100 Maori men were imprisoned for resisting conscription.

Former army officer turned historian Christopher Pugsley, who was the main historical advisor for the exhibition, told Radio NZ that he wanted to destroy the “myth” that the soldiers “were victims of Empire. In fact what they were doing was trying to make it work and survive.” The curators’ wall texts, written from the point of view of an imaginary New Zealand soldier, present this pro-imperialist version of history.

For example, in describing the hostility felt by ordinary soldiers towards commander William Malone—who Pugsley intensely admires—the text declares: “We hated the bastard at first, but he worked harder than anyone to make the place safe. We were dead meat without him.” This is obviously the voice of the government and its hirelings. It is precisely this obedience and respect for the military that both the exhibitions aim to instil in young visitors.

The pro-war carnival taking place across Australia and New Zealand must be taken as a sharp warning. The contradictions of capitalism that caused WWI are once again intensifying. Successive New Zealand governments have strengthened the country’s alliance with US imperialism, which is stampeding from one bloody intervention to the next in the Middle East, while building up its military forces against Russia and China. …

No Glory in War, Only Brave Men Wasted. An updated version of an earlier post to honour the valour of men and boys who fought at Gallipoli: here.