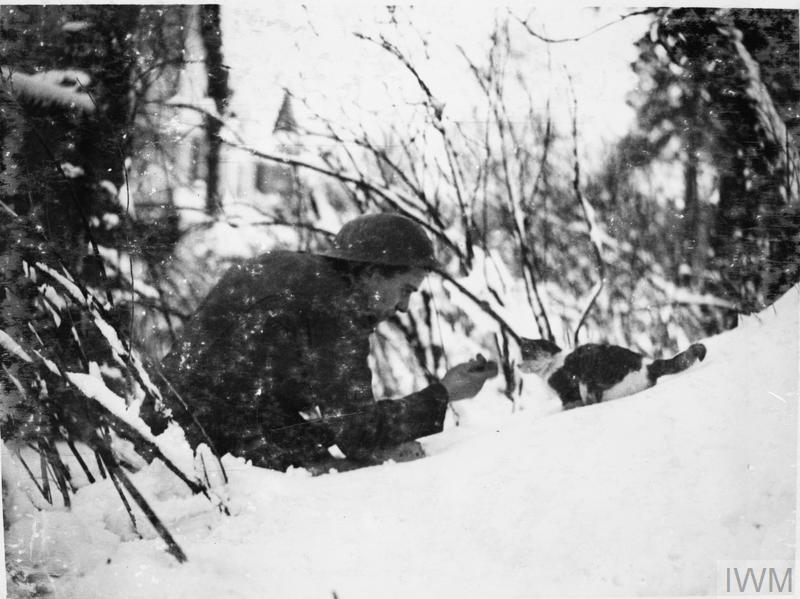 In 1595, in Leiden in the Netherlands, a dog called Provetie (Prophecy) was condemned to death by hanging; as an “example for other dogs”. The judges also ordered that all property belonging to that dog should be confiscated. Provetie was hanged near the Gravensteen, where humans were hanged usually.

From the 13th-17th century in Europe, Jewish convicts got a more cruel punishment than Christian convicts: they were hanged between two dogs as death penalty.

In the twentieth century, there was similar human stupidity. Not about dogs. About a cat.

Here is a poem by Heathcote Williams from Britain.

From the site No Glory in War, 1914-1918. A site protesting against plans of the British David Cameron government to spend many taxpayers’ pounds to ‘celebrate’ the start of World War I in 1914.

The Cat Who was Shot for Treason

A cat was shot for treason
In World War One.
It had acted as an intermediary
Between Allied and Axis lines:

The word “Axis” for Germany and its allies here is an anachronism (though good for poetic alliteration). In the first world war, the German empire and its allies, mainly the Habsburg empire, were called the “Central” powers. “Axis” is a word from World War II; when Hitler’s Germany had as its allies fascist Italy and the Japanese empire.

English and German soldiers
Could send messages
To each other
By tying scraps of paper
To the cat’s collar.
The cat then ran across No Man’s Land,
From one trench to the other.

When the War Office found out,
Allied superior officers
Ordered that the cat, nicknamed Felix,
Should be shot for its being a go-between,
And thus enabling fraternization
Between the warring troops
On the Western Front.

For, after a Christmas truce
When enmity miraculously faded
And one German dug-out sang ‘Heilige Nacht’
As its English opposite number joined in
With ‘Silent Night’;
And when deadly enemies
Shyly scrambled out
Into the open air
Clutching presents
Of rum and schnapps, and lebkochen
And Huntley and Palmer‘s digestive biscuits;
And when they swapped them with broad smiles,
And when impromptu football matches
Broke out up and down the battle lines…
These popular displays of comradeship;
These congenial armistices;
These undeclared cease-fires
Were outlawed by the government
Who declared that all such happenings
Were high treason,
And subject to the same condign punishment
As cowardice, namely the firing squad.

Felix the cat, however,
(Called Nestor by the Germans)
Was a law unto itself.
It would wait patiently
Whilst cheery little scrawls
In English and in German
Were being attached to its collar
By trembling fingers, raw with cold:
“Hello Fritz.”
“Gutentag Tommy.”
“Fröhliche Weihnachten, Tommy.”
“Happy Christmas, Fritz.”

Back and forth the cat skipped across the snow,
Across the hard, unforgiving soil
Of No Man’s Land; first appearing at Mons
And later at Passchendaele.

Then Felix – just like the animals
In the Middle Ages who, notoriously,
Were tried for being suspected
Of being in league with the devil –
Was judged by the top military brass
To constitute a threat
Through its enabling treasonous acts,
Through its being an accessory
To the undermining of the serial hate-crime
That was World War One;
A war crime that left fifteen million dead
Including a peace cat,
Who’s barely ever mentioned
But whose bloodstained paw-prints
Are a lone, feline testament
To war’s absurdity.

This poem is not poetic licence, but based on real history.

13 thoughts on “Cat shot for treason in World War I, poem”