This is a tufted duck video from England.

On Sunday 25 March, again to the “Baillon’s crake reserve“.

Near the southern entrance, tufted ducks and grey lag geese.

In the southern lake, shoveler ducks.

Teal with their soft whistling sounds.

Male and female common pochards flying, landing on the water.

In the northern lake, again over a hundred black-tailed godwits on and near the muddy island. And common, black-headed, and herring gulls. And two redshanks.

On the northern meadow, two hares. Scores of coots. An oystercatcher.

In the lake, two shelducks. The same (?) juvenile black swan as yesterday is cleaning its feathers. 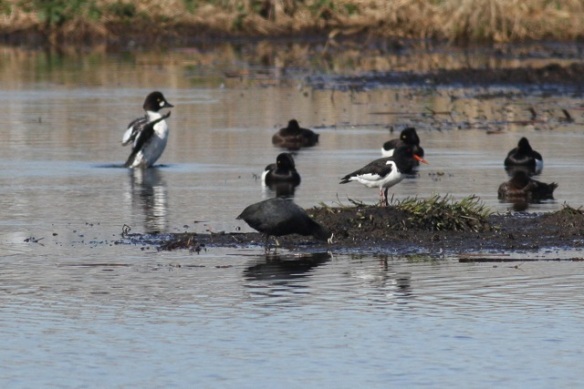 Then, something special. A male goldeneye swims, and cleans its feathers, in the southern lake; in between tufted ducks. An unusual bird for this shallow marshy water.

Just before the southern exit: a little grebe swimming. And a grey heron on a canal bank.

9 thoughts on “Goldeneye and little grebe”