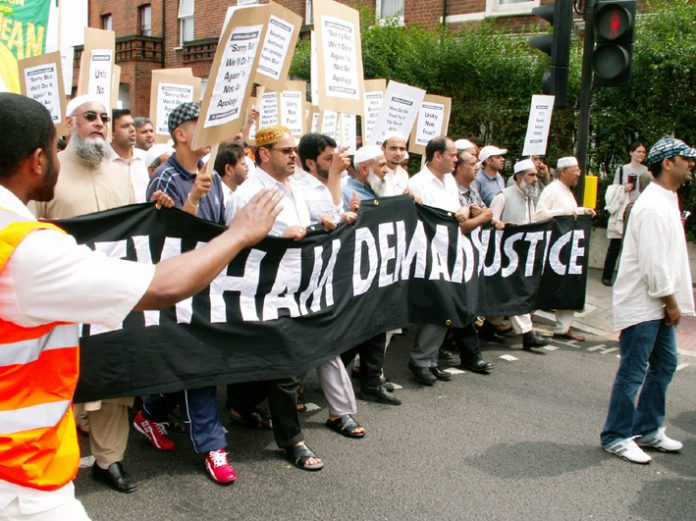 MORE than 4,000 people joined an angry demonstration through Newham yesterday against the huge police raid in Forest Gate on June 7.

As they made their way from East Ham’s Plashet Park to Forest Gate Police Station they chanted: ‘Shame, Shame Ian Blair!

Our community will not live in fear!’

They shouted: ‘Shoot to kill you do allow! Who commits the terror now?’

The whole community united in their condemnation of the 250-strong police raid on two families in Lansdown Road and the shooting of Mohammed Abdul Kadar.

More than 18 organisations sponsored the march, including the Newham Muslim Alliance, Newham Monitoring Project and the Muslim Association of Britain.

The statement put out by the organisers said: ‘This protest is a united demonstration of feeling, from the residents of Newham and those beyond who support them.

‘We believe a full and unqualified apology from the Metropolitan Police to be personally issued to those who were the victims of these events.’

This letter was presented to officers at Forest Gate Police Station and was received by Superintendent David Palmer.

The march then returned to Plashet Park for a rally addressed by Abul Koyair, his brother Jalal, who read out a message from the injured Mohammed Abdul Kadar and Mohammed Dogra, their neighbour, whose house was raided too.

Jalal read the message from brother Mohammed which said: ‘Thank each and everyone for the support of everyone attending today.

‘We want justice for myself and my family.

This is not just for us, but for our neighbours and our community.

‘Thank you to the family of Jean Charles de Menezes.

‘Thank you to all the community that is supporting us.’

‘Anti terrorism’ in the USA: here.

1 thought on “Over 4,000 London demonstrators against ‘anti-terrorist’ violence”