For more about John Heartfield, including never-before-seen private media from his grandson’s collection, please visit here.

Mr. Herbst was kind enough to allow me to present the first five minutes of his documentary “John Heartfield, Fotomonteur” on YouTube.

By Sybille Fuchs in Germany:

Numerous museums forced to close by the COVID-19 pandemic have placed current or past exhibitions online, thereby providing the public access to them.

The Academy of Arts (Akademie der Künste—ADK) in Berlin, which controls the estate of the legendary left-wing photomontage artist John Heartfield (1891-1968), has placed online a virtual, multimedia presentation of photos, documents and audio-visual testimonials dealing with Heartfield’s life and work. The online presentation, Kosmos Heartfield, is available in English.

The ADK exhibition, John Heartfield—Photography plus Dynamite, was due to have opened at the end of March.

The virtual exhibition is well done and, in many respects, highly relevant in the present situation. More than virtually any other visual artist, except perhaps his friend George Grosz (1893-1959), Heartfield is associated with the struggle against reactionary forces in Weimar Germany (1919-1933). His innovative and slashing political montages became directed at the rise of Nazism in particular.

As Christoph Vandreier vividly describes in his book Why Are They Back?, which bears one of Heartfield’s photomontages on its front cover, militarists, nationalists and fascists are once again coming out of the pores of crisis-ridden capitalism as in the 1920s and early 1930s and taking up leading positions in the state apparatus, police, military, judiciary and intelligence agencies. Reactionary ideologies are being revived in the universities and frequently picked up and promoted in the media.

Once again, and for the first time since the end of World War II, a far-right party, the Alternative for Germany (AfD), sits in the German parliament as the official party of opposition and occupies leading posts in Bundestag committees. Its xenophobic and anti-refugee policy has been increasingly adopted as official German government policy.

John Heartfield was born on June 19, 1891, in Berlin-Schmargendorf, the son of the writer Franz Held (actually Franz Herzfeld) and his wife Alice. He was the first of four children. He changed his name, Helmut Herzfeld, to an English one to protest Germany’s chauvinist, anti-English propaganda during World War I.

Heartfield was one of a small group of artists and intellectuals who decisively opposed war and militarism in a period when many others went to war enthusiastically, praising the virtues of combat as a “cleansing thunderstorm.” Heartfield’s poor health and nervous conditions meant he was able to avoid murderous trench warfare.

Heartfield’s younger brother, Wieland Herzfelde, also played an important role. The two brothers founded the magazine Neue Jugend (New Youth) and later the Malik Verlag (Malik Publishing House), which specialised in contemporary political art and communist literature during WWI. Heartfield designed the covers for the books published by the Malik Verlag. In typical Dada fashion, he designed a portfolio for Grosz, which appeared in Neue Jugend in 1917. 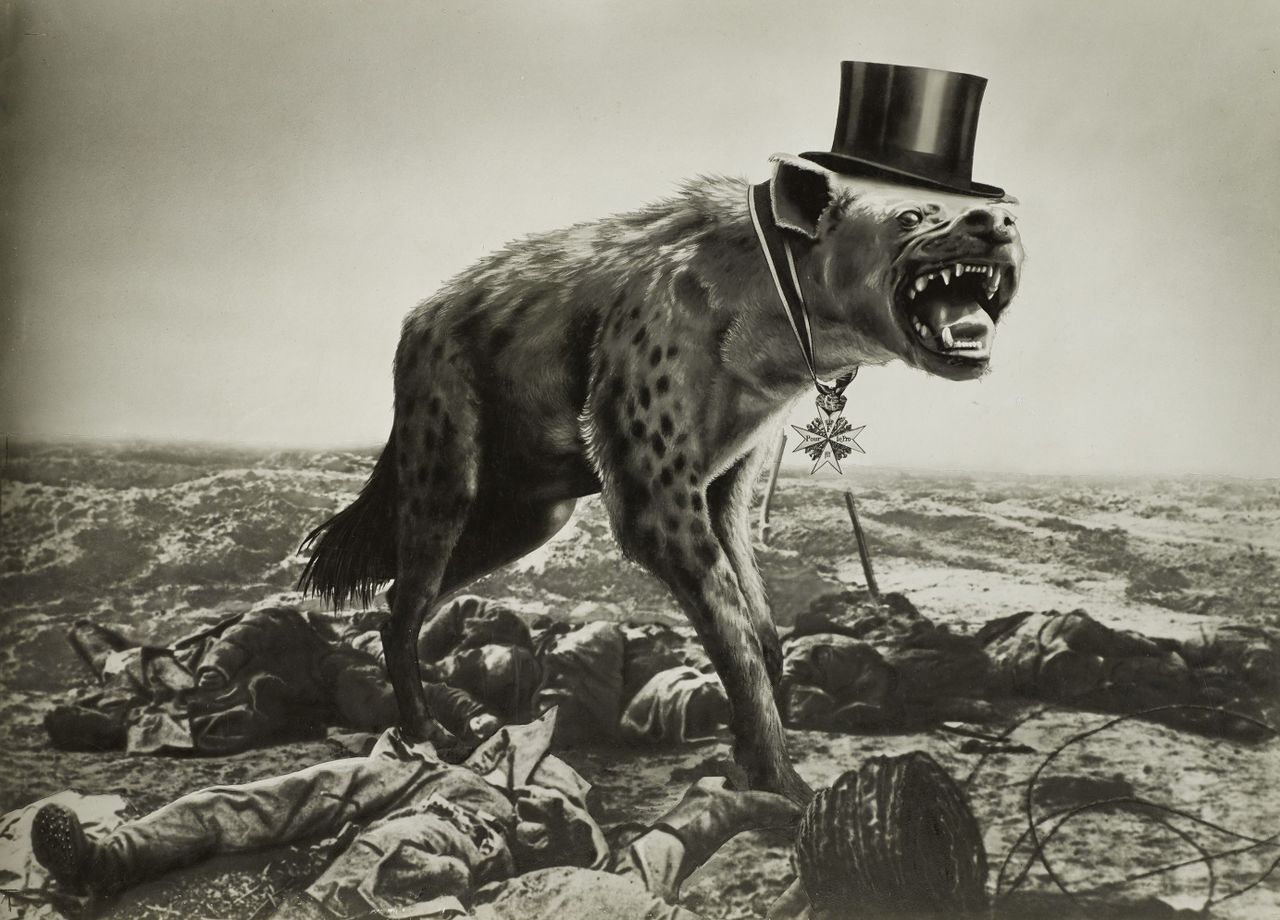 A closer examination, however, of Heartfield’s biography, his problems, the political decisions he made, and the prevailing political circumstances would have helped a contemporary audience to better understand the artist’s rather tragic role and fate. The presentation notes that Heartfield joined the KPD immediately after its foundation in 1919 (as did Grosz). He received his party book from KPD leader Rosa Luxemburg herself, but his decision to side with the working class remains unexplained in the current exhibition.

In fact, Heartfield regarded a workers’ revolution along the lines of the Russian October Revolution of 1917 as the only alternative to capitalist exploitation and warmongering. Further research in the Akademie’s online archive reveals the numerous references, photos and documents that testify to his intense preoccupation with the Russian Revolution. Like many other artists and intellectuals, Heartfield regarded the Communist Party as the only political force that could effectively combat capitalist reaction and its drive towards dictatorship.

It was therefore not surprising that Heartfield produced the powerful photo montages which appeared on the front pages of the KPD newspapers Die Rote Fahne (The Red Flag) and the Arbeiter-Illustrierte-Zeitung (AIZ, Workers Pictorial Newspaper). Many of these montages can be seen in the presentation and a complete documentation is available in the ADK Heartfield online archive.

In the course of the 1920s, the AIZ developed into a publication that found support not only in the working class. The paper published contributions by leading artists and writers such as Käthe Kollwitz, Anna Seghers, Erich Kästner, Maxim Gorky and Kurt Tucholsky (Theobald Tiger). … 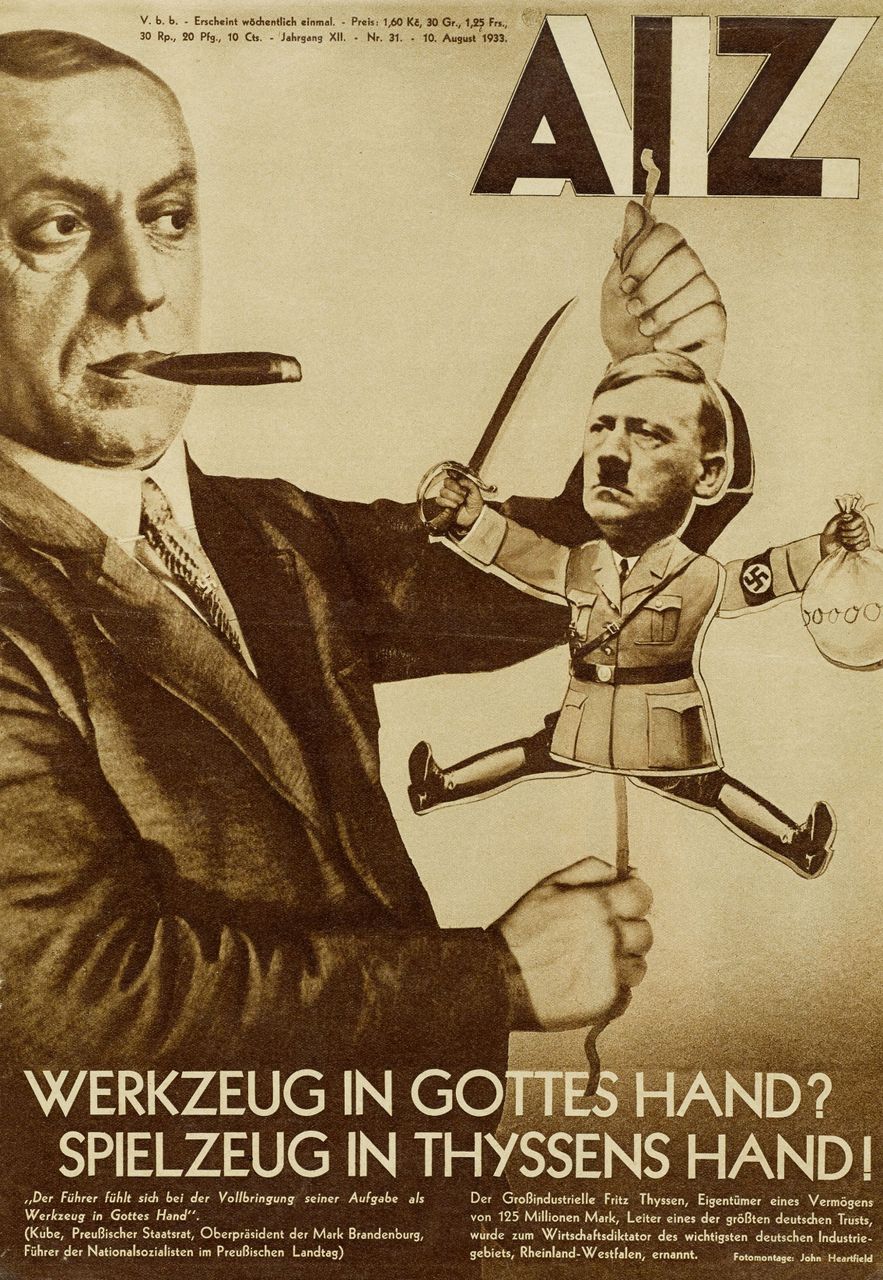 Heartfield remained loyal to the AIZ in Prague where he fled after escaping from a gang of Nazi thugs by jumping from the balcony of his apartment in Berlin in 1933. In exile in Prague along with many other Communists, Social Democrats and left-wing intellectuals who had fled Germany, he created some of his most impressive and politically astute photo montages. He continued to work for his brother’s Malik Verlag, also forced into exile.

Heartfield’s trip to the Soviet Union in 1931 is not mentioned in the presentation. There is also relatively little information about his half-year stay in the USSR in the ADK online archive and in the exhibition catalog. He lived in Moscow with the writer Sergei Tretyakov, a friend of Brecht and a leading member of the Russian avant garde, who, like many other artists and intellectuals, was not prepared to accept the official Stalinist doctrine of “Socialist Realism” in artistic production. Tretyakov was a victim of the Stalinist purges in 1937. In Odessa, Heartfield helped build the exteriors for Erwin Piscator’s film Revolt of the Fishermen (1934) based on the novel by Seghers. …

In 1938, the Nazis occupied Czechoslovakia and Heartfield began his second exile, in London. He chose flight to the West rather than fleeing east into Stalin’s sphere of influence. This was no accident—he evidently avoided exposing himself to Stalin’s repression. In England … he was involved in various activities organised by German artists in exile, in particular the Free German Cultural Association (Freier Deutscher Kulturbund).

In the summer of 1940, he was interned as an “enemy alien,” but released after seven weeks for health reasons.

After the war, his first attempt to return to Germany was initially delayed for health reasons and then became problematic following the outbreak of the Cold War. …

Even after Heartfield was able to return, he had problems building on his previous successes in the German Democratic Republic. The narrow-minded GDR cultural bureaucracy disparaged his photomontages as “formalistic.” …

Heartfield was able to make some advances in the theatrical field in the GDR, but in a relatively conventional manner. He was unable, however, to recreate his powerful collaboration with Piscator in the 1920s. His admission to the GDR ruling party, the SED, and then to the East German Academy of Arts only took place following the personal intervention of Brecht in 1957.

Should the ADK exhibition with its 400 items eventually open to the public, it is well worth visiting. It is due to travel to Zwolle (Netherlands) and London.

The Photography plus Dynamite catalog by Angela Lammert, Rosa von der Schulenburg and Anna Schultz is available from the Academy of the Arts bookshop at a special price of €29.90 (from July €39.90) plus shipping costs. In the foreword, the ADK draws attention to the growing influence of far-right radicalism today.