Today I discuss a new case in my particular area and it’s significance to my assertion that cases are being imported and underreported. The handling of this by the authorities expose government ineptitude even at this point. The censorship is blatant now. The USA swimming team for the Olympics want the games to be cancelled. I found a disinfection site and it doesn’t fit the narrative Japan is pushing.

Why is the World Socialist Web Site banned from the subreddit r/coronavirus?

On Thursday, March 19, users attempting to share the latest World Socialist Web Site articles on the subreddit r/coronavirus were notified that the wsws.org domain had been banned and labeled as an unreliable source by moderators. The message said, “wsws.org may not be reliable. Your post has been automatically removed. If possible, please resubmit with a link to a reliable source, such as a reliable news organization or an [sic] recognized institution.”

The label also says, “I am a bot, and this action has been taken automatically. Please contact the moderators of this subreddit if you have any questions or concerns.” Efforts by the WSWS to contact the r/coronavirus moderators have gone unanswered.

Significantly, the notices banning the WSWS began appearing less than 24-hours after Reddit users shared our article “Mounting anger as workers demand protection from unsafe conditions” which subsequently received thousands of upvotes and hundreds of comments. Although no new WSWS article links can be posted and this article is labeled as “removed by moderators of r/coronavirus” for “off-topic political discussion”, it has been “locked” and remains available to readers. It has more than 21,000 upvotes and 2,500 comments from workers. 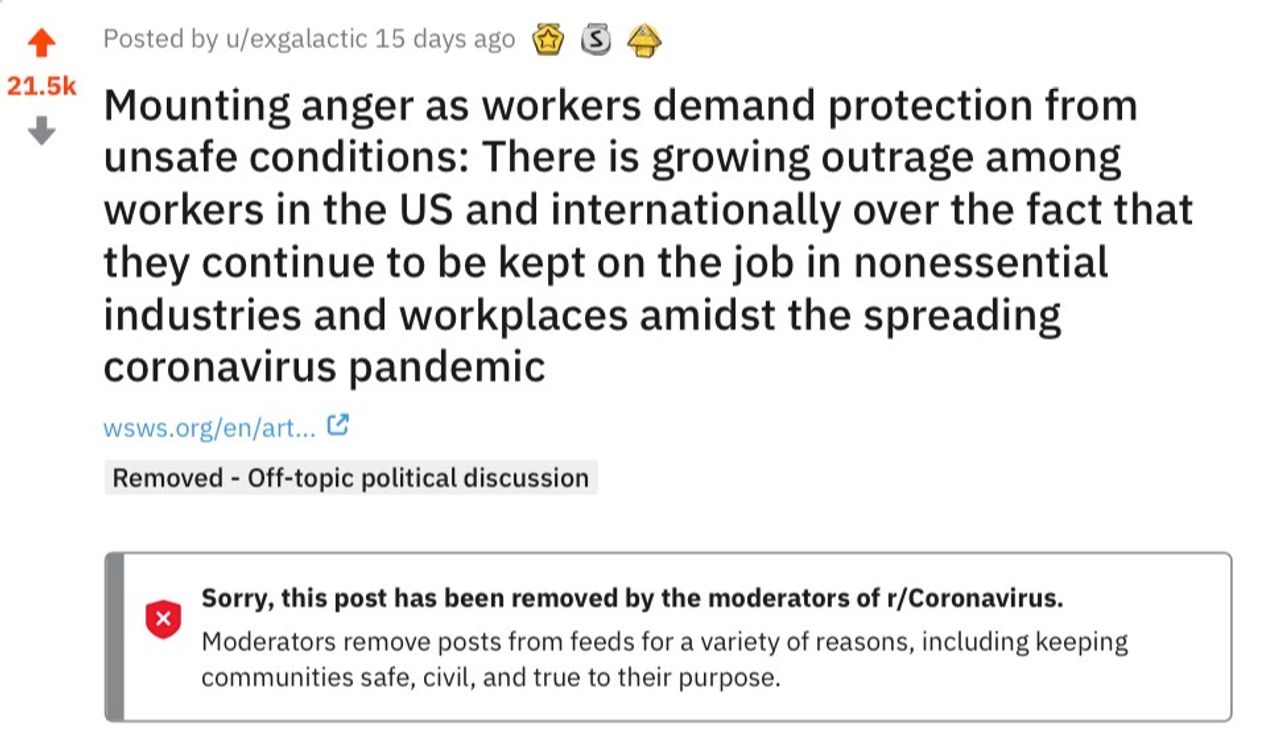 Given that references to “reliable” and “recognized” sources are well-known euphemisms for the corporate media and our article had already received a widespread response on r/coronavirus, the banning of the WSWS by subreddit moderators is unmistakably an act of political censorship designed to block our analysis of the unfolding crisis from reaching the public.

The following timeline of events leading up to the WSWS domain ban confirms this assessment:

By signing the joint industry statement—although there is so far no evidence that Reddit participated directly in the White House tech conference—the social news aggregation site that identifies itself as “The Front Page of the Internet” is demonstrating its collaboration with online censorship of content about the coronavirus that does not conform to the narrative developed by the US political establishment and faithfully repeated by the corporate media.

Reddit—which was founded by college roommates Steve Huffman and Alexis Ohanian in 2005—is owned today by Condé Nast, a subsidiary of the Advance Publications conglomerate which is owned by the Newhouse family publishing and news empire that dates back to the early twentieth century. Condé Nast acquired Reddit from its founders and others, including Aaron Swartz, in 2006 for an estimated $10 to $20 million.

Beginning in 2014, a series of private and institutional investors injected hundreds of millions of dollars into Reddit and transformed it into a multi-billion dollar enterprise. With just 500 employees and an estimated valuation of $3 billion, Reddit is one of the most valuable assets in Silicon Valley.

The presence of the billionaire Peter Thiel—cofounder of Pay Pal and right-wing technology advisor to the Trump administration—on the list of private investors in Reddit is an indication of the types of figures who are playing a role in the organization and directing its collaboration with the White House censorship initiative.

Due to the way that Reddit is organized—with subreddit moderators given autonomy in making decisions about the activity of users, posts and shared links—there is no way to know for certain what role, if any, is being played by the management or owners of the company in preventing WSWS content from being posted on r/coronavirus.

Frequently, subreddit moderators are Reddit users who sign up and volunteer for the role and are then granted significant authority over the activity of users within the community and the content that is posted there. The Reddit structure allows for different levels of moderators with various degrees of permission. The top level has “Full Permissions” including the ability to remove posts and ban users among many other rights.

Like all Reddit users, subreddit moderators enjoy a degree of anonymity and their identity is often concealed behind obscure usernames. Despite this feature of the platform, it is possible to develop a picture of individual moderators based on the subreddits that they moderate as well as their own posting activity on Reddit.

Significantly, on another subreddit called r/subredditcancer, the moderator “justcool393” was asked why Reddit had abandoned its commitment to freedom of speech, to which the moderator replied, “It’s a multi-faceted answer that requires a lot of history and has a lot to do with the complexities of reddit’s situation. Firstly and foremostly, it’s a company that needs to make a profit. Is not exactly that shocking of a revelation but it’s probably the biggest reason.”

With such people having the authority to make the decision to label the World Socialist Web Site as an “unreliable source,” our characterization of the banning of our domain from the subreddit r/coronavirus as political censorship is entirely justified.

Therefore, the World Socialist Web Site is demanding the r/coronavirus moderators provide an explanation: Why are our reports and analysis of the global pandemic coronavirus being labelled “unreliable”? We further demand that all links from the wsws.org domain be restored, and users be permitted to share them on the subreddit immediately.

The WSWS has been published daily for twenty years by the International Committee of the Fourth International and is recognized internationally as a major source of authoritative Marxist journalism and analysis. We are quoted in numerous books and dozens of academic papers. Some of the leading historians of American history have been interviewed on and published statements on the WSWS.

Meanwhile, links from the WSWS have been posted on Reddit for years and our content is whitelisted on r/politics.

The WSWS is currently playing a decisive role in telling the public the truth about one of the greatest global disasters to ever confront mankind. Since January we have published nearly 300 articles on the COVID-19 pandemic by writers based in the Americas, Europe, Asia and Australia. Throughout this coverage, we have sought to educate the public about the details and dangers posed by the pandemic.

Earlier than other news sources, the WSWS recognized the significance of the emergence of the coronavirus in Wuhan, China and its global implications:

As these warnings made by the WSWS were being fully vindicated, the political establishment on every continent was seeking to conceal the implications of the unfolding crisis from the public.

The WSWS analysis proceeded in direct opposition to the incompetent statements and actions of political figures around the world—including US President Donald Trump—about how the crisis was “under control” and public risk was “extremely low.”

On February 28, the WSWS published a statement from the International Committee of the Fourth International “For a globally coordinated emergency response to the coronavirus pandemic” which stated, “The working class must demand that governments make available the resources required to contain the spread of the disease, treat and care for those who are infected, and secure the livelihoods of the hundreds of millions of people who will be affected by the economic fallout.”

It was during the second week of March—as workers around the world began to take action in defense of their own health and safety—that the state, media and tech corporations came together in an effort to control of the flow of online and social media information about the coronavirus crisis.

Given these facts, it is clear that the banning of WSWS content from r/coronavirus is political censorship which only serves those, like US President Trump, who seek to downplay the disease and disorient the public about the meaning of the unfolding crisis.

We demand immediate action by moderators to restore access to our coronavirus pandemic reports, articles and analyses on the subreddit r/coronavirus and the removal of the label on our content as coming from an “unreliable source”.

1 thought on “Coronavirus information censored on the internet”