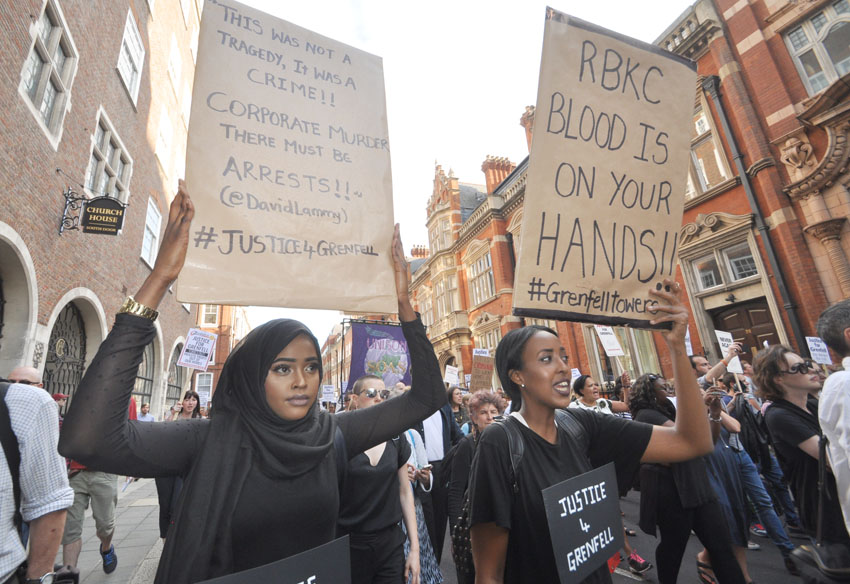 JUSTICE for Grenfell yesterday branded as ‘outrageous’ and ‘atrocious’ the demand by company officials called before the Grenfell Inquiry for immunity from prosecution.

The Grenfell Inquiry official website’s latest posting dated 31st January states: ‘The start date of module 1 oral evidence has been put back in the light of the application asking the Inquiry to consider seeking an undertaking from the Attorney General.

‘On Monday (today), the panel will hear submissions from Counsel for the bereaved, survivors and resident core participants and from Counsel to the Inquiry on the application.

‘The Chairman has confirmed that the Inquiry will not hear evidence on Tuesday. Whether it will be necessary to put the start of oral evidence back further will depend upon the outcome of the application.’

Inquiry Chairman Sir Martin Moore-Bick said last Wednesday that he had been invited to ask Attorney General Geoffrey Cox QC for an undertaking that ‘nothing said by a witness in answers to questions in the inquiry will be used in furtherance of a prosecution against them’.

It came after the inquiry heard that firms involved in revamping the high-rise block appeared to know two years before the disaster that a new cladding system would fail if exposed to fire, according to internal emails disclosed last Tuesday.

‘Immunity wasn’t granted to the firefighters. In fact, they didn’t ask for it.

‘They went into that inquiry in good faith, saying they would answer with honesty and respect for the bereaved and survivors who want to know the truth of what happened.

‘For the corporates and individuals to ask for immunity is actually quite frankly atrocious and it suggests that they’ve got something to hide.

‘I think that actually, after the loss of 72 lives, they owe to the families and those who survive to stand there and tell the truth and be held accountable.

‘If immunity was granted I think it would be up to the bereaved and survivors to decide how they will respond. And it’s also up to the world to decide on the validity of the inquiry itself.’

The Grenfell Inquiry website states: ‘A letter was sent to the Inquiry on behalf of a number of CPs (core participants) and witnesses on 27 January 2020 inviting the Inquiry to consider the need to seek an undertaking from the Attorney General that oral evidence given by witnesses during the course of this phase of the Inquiry will not be used against them in criminal proceedings.

‘This letter was sent against the background of an understanding that similar undertakings had been sought and granted in the majority of public inquiries in recent years. It was signed by the following:

‘In response to this letter, the above named were invited to attend a meeting with Counsel to the Inquiry on 28 January 2020. At that meeting we were requested to:

‘b. Set out the terms of the undertaking that we consider to be necessary in this Inquiry;

‘c. Further information about the potential criminal offences in respect of which witnesses may potentially incriminate themselves in the course of their oral evidence.’

Local resident Lucy Laver responded: ‘I’m not surprised at anything anymore. People are trying to maintain the little faith they had in the Inquiry process to reveal the truth and bring justice and change.

‘This turn of events totally undermines that. I often wonder whether an inquest would have been a better way to bring about justice.’

GRANTING the cladding companies involved in the Grenfell disaster immunity from prosecution would be “tantamount to giving a licence to lie,” it was claimed today: here.

Another bid to evade justice by the authors of the Grenfell disaster: here.

THE GRENFELL INQUIRY HAS BEEN HALTED! Hearings have been cancelled until the chairman of the inquiry, Sir Martin Moore-Bick considers a demand from lawyers representing architects, builders and corporations. These witnesses have said that they will not give evidence unless they have copper-bottom assurances that their evidence will not be used to prosecute them. No resumption date for the inquiry has been given: here.