A large crowd in Ecuador has held a funeral for one of the protesters killed in days of … demonstrations in the country.

At least five people have been killed in Ecuador following a week of protests.

Protesters responded with a nationwide strike.

But Moreno who has moved government operations out of Quito since the protests began has said he will not step down.

Five dead and almost 1,000 arrested as repression mounts in Ecuador

Police state repression and casualties are mounting in Ecuador as mass protests continue against the IMF-dictated austerity package announced by the Lenín Moreno administration on October 1.

As the main component of the IMF deal involving a $4.2 billion loan, President Moreno eliminated fuel subsidies the following day, leading to a sharp increase in fuel prices and subsequent price hikes in other basic goods. This immediately triggered the protest movement, which has included intermittent national strikes called by the trade unions, widespread roadblocks and mass marches with tens of thousands of indigenous demonstrators, students and workers.

On Thursday evening, the Ombudsman Office of Ecuador confirmed that the repression has left five demonstrators killed, 554 injured, and 929 arrested. These numbers do not reveal the full brutality of the repression. Beyond tear gas and rubber bullets, police and military charges have included wild beatings and the running over of demonstrators with motorcycles.

Marcos Humberto Oto Rivera, a 26-year-old worker, and José Daniel Chaluisa Cusco, another young worker, both died on October 8 from their injuries after anti-riot police caused them to fall off a bridge in Quito where they had set up a roadblock. Oto’s brother told Wambra, “he was not a delinquent, he was a worker.”

On October 6, the demonstrator Raúl Chilpe died on October 6 in the Azuay province when a driver ran over a roadblock.

On October 9, Segundo Inocencio Tucumbi Vega, an 50-year-old indigenous leader from the Cotopaxi province, was reportedly surrounded by police cavalry and beaten to death on the head. According to the human rights group Inredh, he was killed by the “excessive repression carried out by the public forces” in Quito. During the same protests in the capital, another indigenous demonstrator from the same town of Pijulí, José Rodrigo Chaluisa, was also killed.

On Thursday, thousands of demonstrators, including students, workers and peasants, gathered in the Casa de la Cultura building in Ecuador to conduct a wake at the casket of Tucumbi Vega. At the event, the Confederation of Indigenous Nationalities (CONAIE) announced that it had captured ten police officers that morning as prisoners. Four of the officials were forced to carry the casket to the stage of the building.

Jaime Vargas, the CONAIE president, then appealed to the leadership of the armed forces to “join the people” and “don’t obey the orders of that traitor, liar and thief,” referring to Lenín Moreno.

After the funeral, the police officials were escorted by hundreds of demonstrators to downtown Quito where they were handed over to officials of the UN and the Ecuadorian Ombudsman’s Office.

In Pijulí, about 60 miles south of Quito, neighbors captured three officials at the police station on Thursday, with the Interior minister confirming Friday morning that they remain prisoners of the indigenous community. A video from the same town captured Thursday and confirmed by radio station Lacatunga showed indigenous demonstrators intercepting an ambulance and a motorcycle carrying weapons, high-caliber munitions and tear gas cannisters.

According to El País, 47 soldiers who invaded the indigenous community of Cochapamba in the same Cotopaxi province were captured and remain detained inside of the church “until the repression stops” and the “brothers arrested” are freed.

This follows the capture of 50 soldiers and five police officials between Saturday and Monday in the southern Azuay province and the takeover of several power plants and oilfields in the northeast since the weekend, forcing the Ministry of Energy to shut down the country’s main pipeline on Tuesday.

David Cordero, a human rights lawyer of Inredh reported that dozens of detainees are being held in police barracks in Quito, presenting the danger of disappearances and torture. RT reported that the Ecuadorian police raided the headquarters of the Pichincha Universal radio station for “inciting divisions”.

These developments highlight the dangers facing Ecuadorian workers, youth and peasants. The Ecuadorian ruling class, with the full support of Washington, is preparing to employ the same methods of repression used by the US-backed military dictatorship during the 1970s.

Without presenting any evidence, Lenín Moreno has claimed that ex-president Rafael Correa and Venezuelan president Nicolás Maduro are financing and orchestrating a “coup”,

Moreno won a narrow victory in Ecuador’s election in April 2017. During his election, he called himself a ‘democratic socialist’. However, after his election he drastically shifted his political stance, distancing himself from ex-President Correa’s socialist legacy and viciously attacking the working class with massive cuts in living standards.

Moreno was also responsible for allowing the British police into the Ecuadorian embassy in west London to seize WikiLeaks founder Julian Assange. Assange is now languishing in Belmarsh prison and threatened with extradition to the US for exposing their war crimes in Afghanistan and Iraq.

with the interior minister claiming Friday that 17 people—“mostly Venezuelans”—were arrested in Quito’s international airport “holding information about the movements of the President and Vice-President.”

These unfounded accusations are another confirmation that Moreno’s austerity and authoritarian policies reflect a shift of the Ecuadorian ruling class toward US imperialism.

While seeking a cover for Moreno’s violent repression, the allegations feed into the Trump administration’s narrative that the Maduro government is a threat to regional security and must be overthrown and a US puppet regime installed. Moreno also revealed his role as a stooge of the State Department by in April ending the asylum for WikiLeaks founder, Julian Assange by opening up the doors of the Ecuadorian embassy in London to a British police snatch squad.

The repression has unfolded in the context of a state of exception declared last week by Moreno, which involves the deployment of the military and the suspension of basic democratic rights. On Monday October 7, Moreno announced the unprecedented decision of moving the seat of the government from Quito to the coastal city of Guayaquil, the traditional center of the Ecuadorian right. On Tuesday, he declared a curfew near “strategic zones” like government installations, ports and bridges.

The Moreno administration has since appealed to the UN, the public universities and the Catholic Church to mediate with the organizations leading the demonstrations, namely the CONAIE, the Workers United Front (FUT) trade union confederation, and the unions …

In a brief stunt Wednesday, Moreno returned to Quito and offered the “indigenous brothers” improvements in water infrastructure, bilingual schools and the cancellation of debts for peasant organizations. Protesters have bitterly dismissed this olive branch.

Julio César, a protester in Quito, told El País, “The country is mired in misery, and a hungry people is a people guided toward struggle.” A local indigenous leader, Rosa Torres, told the Spanish daily, “We will keep fighting until the government cancels its measures, if not it will have to be overthrown.”

The leaderships of the indigenous organizations … are scrambling to keep control over the increasingly radicalized protest movement by rejecting negotiations with Moreno until he cancels the austerity program. 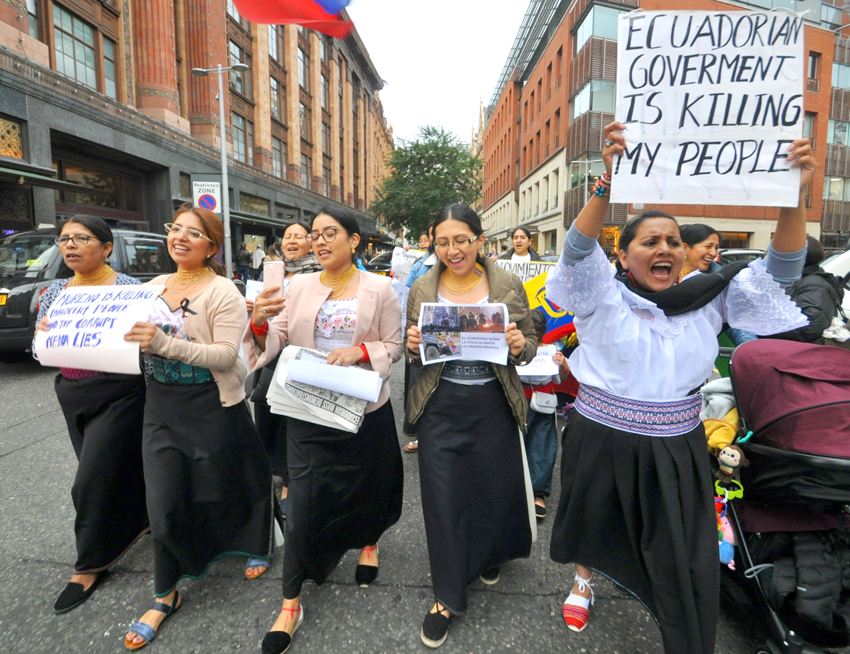 Britain: ‘Lenin Moreno Hypocrite and traitor – the blood of the people is not negotiable,’ shouted over a hundred Ecuadorians and their supporters outside the Ecuadorian embassy in London on Friday night: here.