The government in Chile has imposed another curfew in the capital rocked by protests over the economy.

Set off initially by a rise in metro fares, it has since broadened to include protests about the mismanagement of the economy and the huge income disparity gap.

The military is struggling to keep control, and transport systems and the airport have shut down.

Chilean military deployed against protests for the first time since Pinochet

For the first time since the fascist military dictatorship of Augusto Pinochet, tanks rolled into downtown Santiago, Chile, this weekend, deployed against protesters demonstrating against a drastic fare hike of the Santiago metro, from the equivalent of USD $1.12 to $1.16. Military personnel in plainclothes and uniform were filmed shooting machine guns and pointing them at crowds of demonstrators.

On Saturday, the right-wing government of billionaire Sebastián Piñera invoked the still-standing 1980 Constitution established by Pinochet to declare a state of emergency across the country and to impose curfews in Santiago, Valparaiso and Concepción, enforced by 9,441 soldiers and thousands of Carabineros, the infamous militarized police. The main border crossing with Argentina was also blocked throughout the weekend.

The seamless imposition of these dictatorial measures by the Chilean ruling class, with the backing of US and European imperialism, exposes the sham of a “transition to democracy” in which the basic political and military set-up under Pinochet remain untouched … . 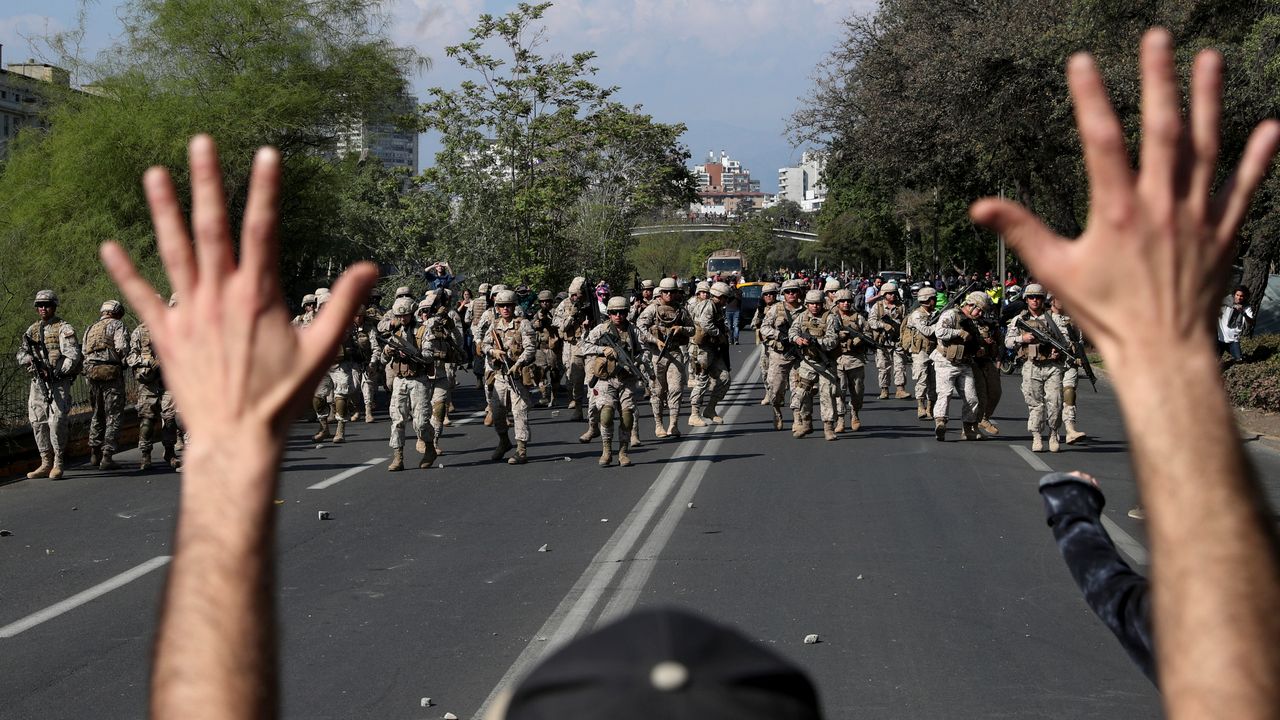 A demonstrator holds up his hands toward advancing soldiers during a protest as a state of emergency remains in effect in Santiago, Chile, Sunday, Oct. 20, 2019.

The international character of this process, reflected concurrently in the fascistic repression against the Catalan nationalists … in Spain and the military crackdown in Ecuador, demonstrates that the ruling class everywhere is responding to the crisis of capitalism and the resurgence of the class struggle with a return to dictatorship to impose the economic diktats of finance capital.

Expressing these sentiments, Alejandra Ibánez, a 38-year-old demonstrator, told AFP: “I don’t like the violence or that some people break things, but all of a sudden these things have to happen so that they stop mocking us and stuffing their fingers in our mouths, raising everything but salaries, and all of this to make the rich in the country richer.”

On Friday, demonstrations grew and shut down all 136 stations of the Santiago metro system. Dozens of stations were lit on fire, as was the headquarters of Enel, a private Italian firm that controls 40 percent of energy distribution in Chile, and the offices of the pro-Pinochet El Mercurio newspaper in Valparaíso.

On Saturday and Sunday, the curfews were defied by thousands of demonstrators and, in Santiago, protesters holding pictures of victims under the Pinochet dictatorship temporarily surrounded the tanks.

At 10 p.m. Saturday, hours after invoking the state of exception and calling demonstrators “true delinquents who do not respect anything”, Piñera said he had “heard with humbleness the voice of my compatriots” and announced the repeal of the most recent fare hike of 30 pesos for the Santiago Metro. (Metro prices in rush hour had already increased 100 pesos, or nearly 15 percent, since February 2018.)

The state of emergency, however, will continue indefinitely, and the curfew was also invoked on Sunday night. According to a statement Sunday by the Ministry of Interior, 1,462 people have been arrested and 15 civilians hurt.

Five civilians died when a supermarket in Santiago caught fire amid the demonstrations and repression. At the same time, entire sections of Santiago remained without electricity Sunday, while school classes were suspended today.

In a not-so-subtle reference to the Pinochet dictatorship, the Association of Retired Navy Officials published a statement Sunday claiming “we have preparation and vast experience organizing and running a country in a convulsive moment” and called for action that would “support the Armed Forces and Police to recover the rule of law in Chile.”

When the left … Salvador Allende was elected in September 1970, the [United States] Richard Nixon administration plotted his overthrow immediately. Jotted notes by then-CIA Director Richard Helms from orders given by Nixon 10 days after Allende’s election read, “Not concerned risks involved. No involvement of embassy. $10,000,000 available, more if necessary. Full-time job—best men we have… Make the economy scream. 48 hours for plan of action.” (Kissinger: A Biography, Walter Isaacson, 1992, p. 290)

Chile erupts as youth and workers take on the military in fight against austerity: here.