This 8 October 2019 video says about itself:

Footage shows the activists from indigenous communities in the Guangopolo area east of Quito blocking roads with rocks, stones, tree trunks and barricades.

“Our comrades are coming from the south, from the north, from the centre; from the east and, [with them] comes the seizure of Quito. Comrades and [I give you] a suggestion, get water and food supplies,” said indigenous leader Sebastián Correa, adding, “we are willing to give our life.”

Streets surrounding the civic centre of the locality also remain without commercial activity, blocked off by fences and barbed wire. …

Ecuador is experiencing a wave of protests triggered by the announcement of the so-called ‘paquetazo’, a series of economic adjustment measures including the elimination of fuel subsidies. These measures, which are set to increase gasoline prices, reduce the salaries of public employees and raise taxes for some companies, have been met by protests across Ecuador. President Moreno has declared a 60-day state of emergency.

In the face of a continuing strike and a mass indigenous mobilization against annIMF-dictated austerity package, Ecuador’s President Lenín Moreno moved his government from the capital of Quito to the coastal city of Guayaquil, where he is now directing a police-state crackdown.

This retreat from Ecuador’s Andean capital, unprecedented in the country’s history, is a measure of the intensity of social and political unrest as Ecuador enters a second week of demonstrations against the draconian austerity program unveiled by the Moreno government on October 1.

On Tuesday, indigenous demonstrators marched through the streets of Quito and occupied the national congress as well as other government buildings.

Late on Tuesday, Moreno decreed a partial curfew near “strategic zones” like government buildings, which will be overseen by the armed forces. Heavily armed troops have been deployed to the streets of Quito, deploying razor-wire barricades to block protesters.

The government has responded to the resistance with increasingly dictatorial measures. It has suspended the right to assembly and strike and deployed the military after declaring a state of exception last Wednesday. Emergency rule was ratified by the Supreme Court, despite reducing it from 60 to 30 days. The repression has resulted in one death, the wounding of dozens of demonstrators attacked with rubber bullets, tear gas and baton charges, along with 570 arrests. Several detainees, including the leader of the taxi drivers’ union, face three-year sentences for “paralyzing public services”.

Schools have remained closed since Thursday. There were roadblocks Tuesday in 17 of the 24 provinces. On Sunday, a demonstrator named Raúl Chilpe was killed by a driver attempting to run over a roadblock in the Azuay province.

On Monday, Moreno said he would not “turn back” on his decisions and portrayed the protests as “looting, vandalism and violence” aimed at “destabilizing the government.” He alleged—without providing a shred of evidence—that the mass protests had been instigated and financed by his predecessor Rafael Correa

of whom Moreno during his election campaign promised to continue the leftist policies, before Moreno took a U-turn towards Donald Trump and the IMF, once elected

Moreno’s chief of staff, Juan Sebastián Roldán, contradicted his boss, declaring: “What is happening and what may happen is the sole and exclusive responsibility of the indigenous leaders who have lost control of the situation.”

Across the eastern and southern provinces, indigenous protesters have captured several military and police convoys, with at least one group of 50 soldiers and five policemen held prisoner until Monday, when they were freed. The oil ministry reported that three state-owned PetroAmazonas oilfields in the northeastern provinces had been “occupied by people not related to the operation,” leading to a 12 percent fall in national production.

Workers, students and indigenous communities have mobilized massively in roadblocks and during the nationwide strike last Thursday and Friday, demanding an immediate end to austerity and the resignation of the Moreno government.

On the other hand, despite claiming to reject any talks with Moreno until the austerity package is cancelled, the organizations leading the protests—most prominently the trade union confederation United Workers Front (FUT), the Confederation of Indigenous Nationalities (CONAIE) and the … Popular Front—are appealing for intermittent, “gradual” protests and “national unity”.

Dictated by the International Monetary Fund (IMF) as part of a $4.2 billion loan agreement approved in February, the most severe measure is the elimination of $1.3 billion in fuel subsidies, which have resulted in the more than doubling of gas and diesel prices. This in turn has triggered a spiraling of prices of basic necessities.

The decision to scrap the fuel subsidies—which even the most right-wing governments had shied away from for the last four decades—marks a new stage in the efforts of the Ecuadorian ruling class to ingratiate itself with US and European capital. The international banks and financial institutions have persistently demanded the elimination of the subsidies. …

A June 2019 study by the Inter-American Development Bank (IADB) found that the greatest beneficiaries of the subsidies were oil companies and the businesses in general; however, their elimination will cut the incomes of the poorest 40 percent of the population by 4.5 to 5 percent. The proceeds extracted through the intensification of poverty and hunger will be channeled to Wall Street as well as wealthy bondholders within Ecuador itself.

Other diktats of globalized finance announced by Moreno on October 1 include cuts to tariffs and taxes on certain imports, a labor reform to facilitate “flexible” contracts, a 20 percent wage cut for new-hires in the public sector and a reduction from 30 to 15 yearly vacation days. This comes on top of the firing of 20,000 public employees that has been carried out since May 2017.

The austerity drive and the accompanying authoritarian forms of rule fundamentally express the turn by the Ecuadorian ruling class to US imperialism in response to the deepening crisis of Ecuador’s economy and global capitalism.

Washington has already signaled its desire that Moreno make no concessions and use whatever force necessary to suppress the mass protest movement. Michael G. Kozak, assistant secretary of state for the Western Hemisphere, tweeted Monday: “We recognize the difficult decisions that the Government of Ecuador has taken to advance good governance & establish the basis for sustainable economic growth.”

“The US is monitoring recent developments in Ecuador carefully” he added. Indicting the mass social opposition and providing a green light for murderous repression, he said, “We reject violence as a form of political protest.”

The turn by the Ecuadorian ruling class … to US imperialism has been expressed most starkly in Quito’s treatment of WikiLeaks founder Julian Assange, the world’s most important political prisoner. In August 2012, Assange was granted asylum in the Ecuadorian embassy in London to escape persecution by Washington for exposing US war crimes and diplomatic intrigues.

… Moreno then gradually increased Assange’s isolation until opening the doors of Ecuador’s London embassy to a British police snatch squad last April, paving the way for his extradition to the US, where he faces espionage and conspiracy charges that carry sentences of 175 years in prison and potentially the death sentence.

Tens of thousands demonstrated in Quito against the illegal revocation of Assange’s asylum in April 2019. Three months later, the official call of a five-day national strike denounced “the rendition of WikiLeaks founder Julian Assange to the United States, placing his life in danger.”

These actions evidenced the massive opposition in Ecuador to the continued persecution of Assange and the recognition that the betrayal of the WikiLeaks editor is part and parcel of the Ecuadorian bourgeoisie’s growing subservience to US imperialism and its intensification of the attacks on the working class.

Previous mass protests, on the scale now being seen in Quito, have led to the ouster of governments. Moreno is hoping to avoid this fate by entrenching himself in Guayaquil, Ecuador’s largest and most industrialized city, and home to its most important port.

In 1997, right-wing President Abadalá Bucaram was impeached by Congress to appease mass protests against privatizations, austerity and corruption, forcing him to escape the besieged Carondelet Presidential Palace in an ambulance and flee to Panama. In 2005, President Lucio Gutiérrez resigned and had to escape from the palace in a helicopter due to mass protests over similar grievances, including his allowing the return of Bucaram to Ecuador. Protesters then prevented his plane from leaving the Quito International Airport, forcing him to seek asylum at the Brazilian embassy. 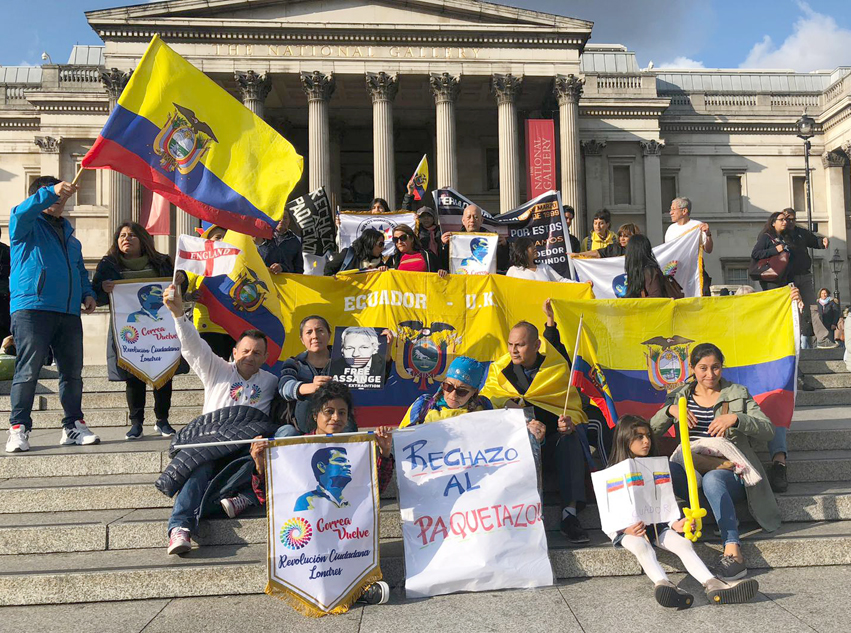 ECUADORIAN President Lenin Moreno abandoned the capital, Quito, on Monday and fled to the coast ahead of mass demonstrations which were held yesterday. A mass uprising is underway in Ecuador following the abolition of fuel subsidies, as ordered by the International Monetary Fund (IMF): here.