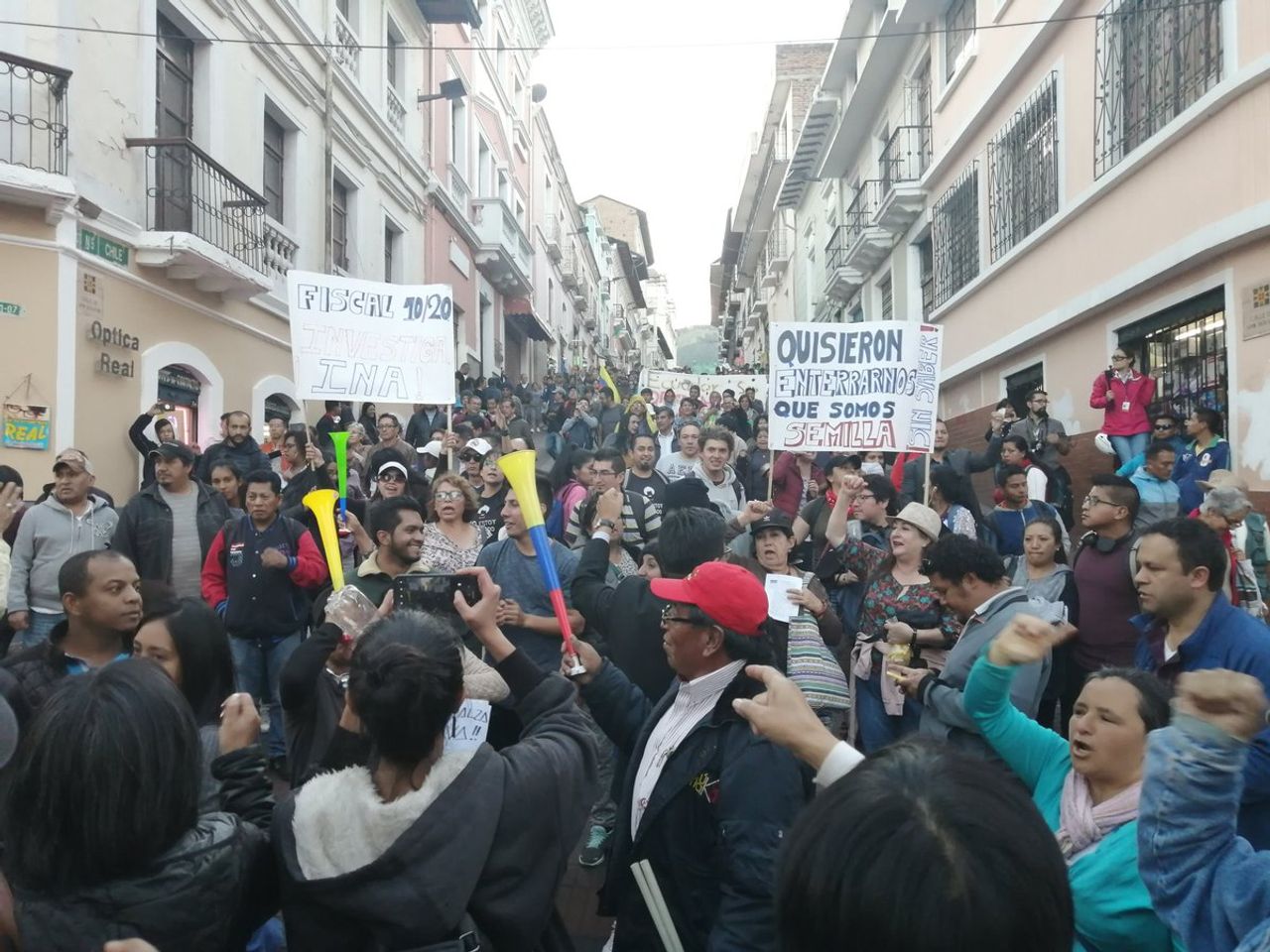 Workers, peasants and youth in Ecuador began a five-day strike Monday against the draconian policies of the Lenín Moreno administration, which is seeking to strengthen its ties to Washington and its military-intelligence apparatus.

The strike constitutes the first major industrial action in the world demanding the freedom of Julian Assange. The demand is presented in the framework of growing opposition to the attacks against social and democratic rights associated with the Moreno administration’s totally servile policy toward US imperialism.

While the corporate media outlets … have sought to bury the issue during the strike itself, one of the few specific issues that the official call for the strike protests is the “rendition of WikiLeaks founder, Julian Assange, to the United States, placing his life in danger.”

This refers to the withdrawal of Assange’s asylum at the Ecuadorian embassy in London, where he was seeking refuge from US efforts to capture him and process him under espionage charges potentially carrying the death penalty, for publishing hundreds of thousands of diplomatic cables and other files exposing US and NATO war crimes, mass spying and diplomatic conspiracies around the world.

As millions of workers enter into the class struggle globally to oppose deepened social austerity, attacks on living standards, imperialist wars and the move toward dictatorship, the banner and example being raised by Ecuadorian workers for the liberation of the persecuted journalist needs to be embraced by every fight for social equality and against imperialism.

Beyond the immediate treachery of the Ecuadorian ruling class, the persecution of Assange and whistleblower Chelsea Manning is a crucial battle for workers as Washington and its partners use their vengeful campaign as a spearhead to silence all opposition and future exposures of war crimes, mass repression and dictatorship in every continent—imperialism’s only response to the deepening crisis of global capitalism.

The organizers of the strike include the Peasants National Movement (FECAOL), the main Workers Union Federation (FUT), dozens of activist organizations grouped in the National Citizens’ Assembly (ANC), and Social Compromise, the new party of ex-president Rafael Correa. They claim this is the broadest strike in 14 years.

On Tuesday, the main day of planned demonstrations, protesters set up dozens of roadblocks—from the coastal highways of Manabí, Guayas and El Oro, surrounding the port city of Guayaquil, to the capital of Quito, east on the PanAmerican Highway to Colombia and south to the Morona Santiago province and Perú along the Andean range—that brought the country to a virtual standstill.

Most of the signs of protesters were hand-made and focused on firings, social cuts and the role of the “International Misery Fund,” as the International Monetary Fund (IMF) is labelled, in the cities, and on land, water rights and mining concessions in the rural areas. Ecuadorian migrants in Bolivia, Spain, the United States and other countries carried out rallies in support of the strike.

About 11,800 public employees, mostly in the health care sector, were fired during Moreno’s first year in office as part of the austerity conditions of a $4.2 billion loan approved by the IMF in March.

Another issue raised in the strike call is “the rejection of the handing over of the Galapagos for the interests of North American imperialism”, referring to a recent agreement with the Pentagon to use the Ecuadorian archipelago, designated by the UN as a biosphere reserve and World Heritage Site, as an air base. …

Nonetheless, the continued prominence of Assange’s defense in demonstrations reflects the profound social anger toward a historical watershed in the domination of imperialism over Ecuador and Latin America as a whole.

When the Moreno administration opened the doors of its embassy in April to a British snatch-squad to arrest Assange, in the process violating international asylum laws and protections in the Ecuadorian constitution, up to 20,000 protesters marched through Quito under banners of “world disgrace” to demand the freedom of the WikiLeaks founder. The protest was met with batons, attack dogs, and tear gas by the riot police.

Moreno has since responded to the ongoing popular outrage over the handing over of Assange to imperialism by continuing to criminalize WikiLeaks, attack democratic rights and cover up his government’s corruption.

In April, Moreno absurdly charged Assange, in spite of the regime of isolation he was being subjected to, with hacking the Ecuadorian president’s communications and leaking documents exposing his family’s involvement in laundering millions of kickbacks and his lavish personal lifestyle. Furthermore, without any formal charges or evidence, the Moreno administration arrested Assange’s friend Ola Bini, a Swedish programmer living in Quito, for 70 days, based on vague allegations that he was involved in the corruption scandal.

Now, on Monday, CNN made a slanderous report based on documents provided by the Moreno government and collected by a Spanish firm hired by the Ecuadorian embassy in London. Again without presenting any actual evidence and despite consistent denials by WikiLeaks, it claims that Assange collaborated with the Russian government in leaking Democratic Party e-mails during the 2016 elections.

Last month, the International Committee of the Fourth International and the World Socialist Web Site launched a global campaign “to politically arouse and mobilize the international working class—the overwhelming majority of the population and the most powerful social force on the planet—in defense of Julian Assange and, in fact, the democratic and social rights of all workers.”

As demonstrated by the protests and recent strike in Ecuador, the only social basis for the defense of Assange, freedom of speech and all democratic rights is the international working class. All seriously committed with this struggle should sign up to build the Global Defense Committee.

Indian auto workers speak out in defence of Assange and Manning: here.

USA: A federal court ruling last Tuesday dismissing a Democratic National Committee (DNC) civil suit against Julian Assange “with prejudice” was a devastating indictment of the US ruling elite’s campaign to destroy the WikiLeaks founder. It exposed as a fraud the entire “Russiagate” conspiracy theory peddled by the Democratic Party, the corporate media and the intelligence agencies for the past three years: here.

A state delegates’ meeting of the New South Wales Greens last weekend passed a motion condemning “the Australian government’s failure to defend” persecuted WikiLeaks founder Julian Assange, and calling for him to be “brought home and given the support and services he needs.” The motion reflects an emerging groundswell of opposition to the US-led persecution of Assange and the Australian government’s refusal to uphold his rights as a citizen and journalist. It is undoubtedly also a response to anger at the protracted silence of the Greens over Assange’s plight, and the organisation’s failure to mount any campaign in his defence: here.

Ecuador has been rocked by a nationwide strike and widespread protests following the announcement Tuesday by the right-wing government of Lenín Moreno of an austerity package involving $1.4 billion in annual cuts. The specific measure that unleashed the demonstrations was the elimination of gas subsidies, which went into effect at midnight Wednesday and increased gas prices from $1.85 to $2.30 per gallon and diesel prices from $1.03 to $2.27 per gallon. Since Wednesday, transportation workers have been on strike. They have been joined by workers and students across the country, who have set up roadblocks and held demonstrations. The price hike is particularly incendiary in a country whose main product is petroleum, which accounts for 30 percent of exports: here.