Thousands of people showed up to show opposition to any intervention in Syria. Jeremy Corbyn MP gives a fiery speech and Ali Assi, a political analyst, suggests Britain withdrew from the conflict out of fear of retaliation.

THE warmongers are on the warpath again, but this time the familiar faces — Tony Blair and the usual gaggle of gung-ho Labour and Tory MPs — are joined by US President Donald Trump and, taking time off from attacking railway workers, French President Emmanuel Macron.

They are itching to step up the slaughter in Syria and may have done so even before tomorrow’s Morning Star has hit the newsstands.

As Talleyrand said of Louis XVIII and the Bourbon dynasty, Blair and his allies have learnt nothing and forgotten nothing.

They have learnt nothing about why Western military intervention provoked so much opposition at home and such murderous mayhem in Afghanistan, Iraq and Libya.

And they have forgotten nothing about the policies pursued then that they are so keen to see prosecuted with renewed violence now.

The history of imperialist interference and intervention in the Middle East has been one of utter catastrophe for its peoples.

In the scramble for control over resources, transport routes and regimes, Britain, France and the US have organised invasions, coups, wars and blockades that have killed or displaced people in their millions, empowering dictators and torturers and setting communities at each others’ throats across the whole region.

Yet today, the politicians, pundits and Nato chiefs still pop up on our television screens to tell us how the West must drop more bombs on Syria as part of the humanitarian mission to bring peace and stability to its citizens.

In Britain, they were denied their first taste of Syrian blood in August 2013, when MPs rejected the Tory-Lib Dem motion to send in the RAF against the Assad regime.

That decision was reversed in December 2015, when it was dishonestly claimed that the purpose of British military support for the US invasion would be to roll back the Islamic State [ISIS] fundamentalists.

Today, the pretext for escalating Britain’s military involvement in Syria is that the Assad regime — the internationally recognised, legitimate and elected government in Damascus — is guilty of a poison gas attack on the citizens of Douma.

Film of the aftermath, broadcast across the world in recent days, shows a troupe of very camera-conscious young men washing down the victims, all of whom are children, most of them looking more bewildered than wounded or incapacitated, and without a distressed parent or relative in sight.

The Syrian government, backed by Russia, whose forces, together with the Syrian army and Kurdish militias, have turned the military tide against Islamist fundamentalists and other anti-Assad rebels, has called for an urgent on-the-spot investigation by the UN and the Organisation for the Prohibition of Chemical Weapons (OPCW).

The mandate for the previous joint fact-finding mission expired at the end of 2017.

If this is an insincere ploy by Damascus and Moscow to avoid US, French and possible British retribution, then their bluff should be called by sending in a multinational OPCW team at once.

Its findings could then form the basis for an informed debate in the UN general assembly and on the security council about the appropriate measures to deal with any transgressors.

In the meantime, the haste to escalate the armed conflict in Syria should be resisted.

Those in the US, Britain, France and Israel who want to bomb first and ask questions later, bypassing the UN and its agencies, must not be allowed to repeat the devastating follies of the past.

Large sections of the American and international media are demanding that the Trump administration follow through on its rhetoric and launch a massive military assault against the Russian-backed Syrian government of Bashar al-Assad. The recklessness of the editorial agitation is underscored by the fact that the calls for “action” are indifferent to the possibility that an attack on Syria could provoke a war with nuclear-armed Russia: here.

France and UK spar to be leading US military partner in Syria: here. 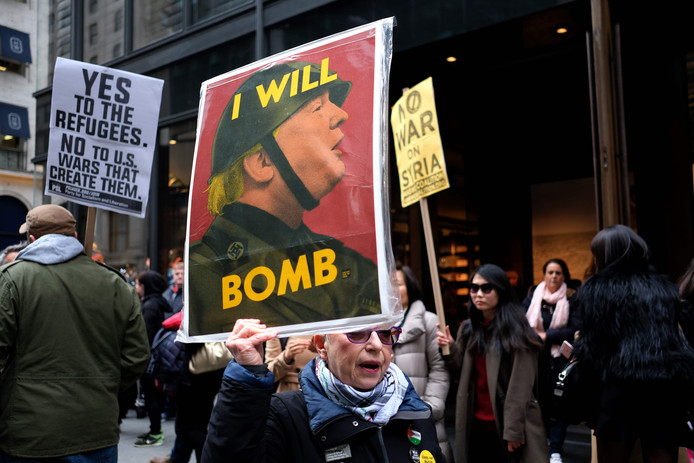 This photo shows a protest against Donald Trump’s 2017 attack on Syria.