CITIZENS of Muslim-majority Malaysia are banding together in solidarity with those affected by U.S. President Donald Trump’s seven-country immigration ban, with several groups across different political affiliations staging a protest Friday at the U.S. embassy in the capital Kuala Lumpur.

The protest dubbed #NoBanNoWall saw about 150 activists, politicians and student leaders gather at 2.30pm after the Muslim Friday prayers to deliver a memorandum to the embassy.

“It is cruelty on the part of Donald Trump to issue such an executive order,” Saifuddin Abdullah, chief secretary of the opposition Pakatan Harapan (PH) alliance, told the gathering.

“Can you imagine, people who have already boarded the plane, they have been stopped at the airports… even though they have been promised they’d be allowed into the U.S. You’d have to be in their shoes to understand how cruel Donald Trump’s executive order is.

Prior to the event, Saifuddin said in a Twitter post that the Muslim ban spoils all the good work that has been done to promote moderation and religious harmony in the country. 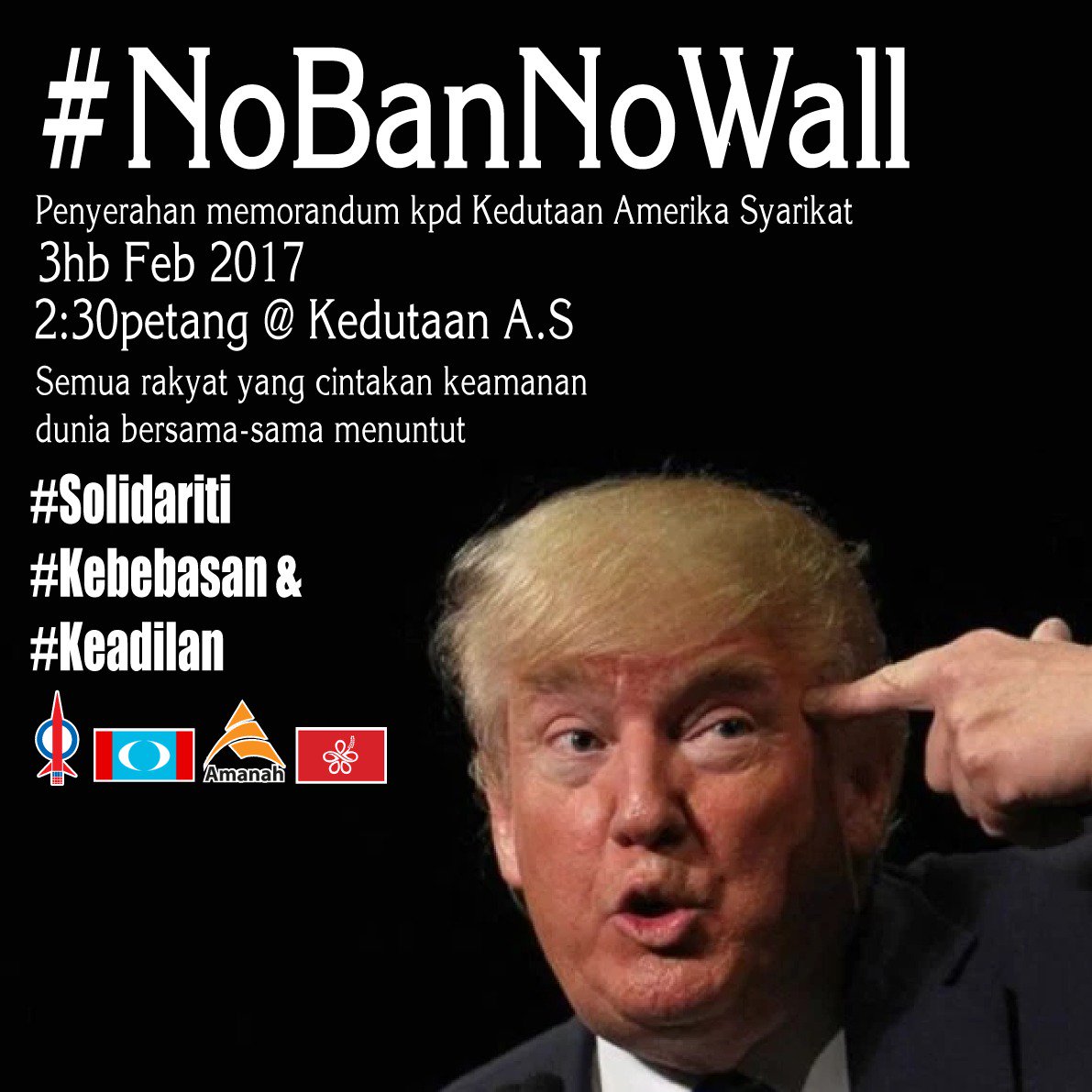 “Just because Malaysia is not on the list doesn’t mean it won’t ever be on the list,” she said.

Local community activists attended the rally to add their voice to the protest. Many saw the issue as not purely being about Trump but about the wider issue of discrimination across the world.

The Socialist Alternative movement saw Trump as a figurehead of a much wider issue.

“Trump is a product of the system, we can see the same character that we see in Trump in many places…he is a figurehead for a wider problem,” a Socialist Alternative representative said.

“The system needs to be changed, and this protest is a start.”

Student group, the Malaysia Progressives In Australia, attended to denounce Trump’s executive order and to express their concern at the Malaysian political environment.

“We see issues of racism, immigration and discrimination here in Malaysia as well and we want Malaysians to know, everyone to know, that we are against that happening wherever we are.”

In one of his first acts as president, Trump made good on one of his campaign promises with an executive order suspending entry of all refugees for 120 days; banning Syrian refugees indefinitely; and blocking entry for citizens of Iran, Iraq, Libya, Sudan, Somalia, Yemen and Syria for 90 days.

After the order was signed last Friday, chaos and confusion immediately gripped U.S. airports as protesters gathered to rail against the policy, and travelers found themselves caught up in an immigration nightmare.

In the memorandum addressed to U.S. Ambassador-Designate to Kuala Lumpur, Kamala Shirin Lakhdir, the group pointed out that the ban was a violation of Article 9 of the Universal Declaration of Human Rights which was adopted in 1948.

The group said the act of singling out Muslims and Muslim-majority countries for the crimes of a small majority of extremists is “grossly irresponsible”.

“This is not the case of the West versus Islam. It is a case of violent extremists against the whole world,” the group said.

They also said in the fight against terrorism, Muslims also fell victim as much as Christians, Hindus, Buddhists and the rest of humanity.

“Such violation of human rights will not solve the issue of terrorism and security concerns,”

“For the United States to go against everything it believes in, condones such a blanket discrimination and is shameful,” the group said.

The Organisation of Islamic Cooperation (OIC), the world’s largest body of Islamic nations, has labelled the ban a “grave concern”, warning in a statement that it would only serve to embolden extremists and provide further fuel to advocates of violence.

“The OIC calls upon the United States government to reconsider this blanket decision and maintain its moral obligation to provide leadership and hope at a time of great uncertainty and unrest in the world,” the 57-nation body said, according to Fox News.

As criticism poured in across the globe, Trump vigorously defended the order …

In Southeast Asia, politicians in Muslim-majority Indonesia and Malaysia immediately expressed concern as the ban took effect, although the two countries were not named in the ban list.

Malaysian politicians such as Ong Kian Ming, a parliamentarian from the opposition Democratic Action Party, labelled the move “inhumane”.

Like his Malaysian counterpart Najib, Indonesia’s President Joko Widodo has also yet to speak out against the ban.

(A. Azim Idris, Emma Richards and Lee Lian Kong contributed to this article)