This 2016 video is the trailer of the film EXHIBITION ON SCREEN – The Curious World of Hieronymus Bosch.

Who was Hieronymus Bosch? Why do his strange and fantastical paintings resonate with art lovers now more than ever? How does he bridge the medieval and Renaissance worlds? Where did his unconventional and timeless creations come from? Discover the answers to these questions and more with this remarkable new film from EXHIBITION ON SCREEN.

The Curious World of Hieronymus Bosch features the critically acclaimed exhibition ‘Visions of a Genius’ at the Noordbrabants Museum in the southern Netherlands, which brought the majority of Bosch’s paintings and drawings together for the first time to his home town of ‘s-Hertogenbosch and attracted almost half a million art lovers from all over the world.

With his fascinating life revealed plus the details and stories within his works seen like never before, don’t miss this cinematic exploration of a great creative genius.

An earlier film, Jheronimus Bosch, Touched by the devil, had as its main theme the complex preparations for having the exhibition to commemorate the 500th anniversary of the death of the painter in the North Brabant Museum in Den Bosch, the city where he was born and worked.

The new film was finished after the exhibition in Den Bosch. It shows images of the paintings, drawings and spectators in the museum. And images of Bosch’s works, sometimes zooming in on details. Or scans, showing that Bosch sometimes painted over parts of earlier versions.

Art experts explain in the film what, according to them, Bosch meant to say in his works. He must have been an avid reader, as some of his work is based on texts and pictures from books. The interviewees point out allusions to Biblical stories or medieval traditions which are not obvious to 21st-century spectators. However, what Bosch really meant is a more complex issue than becomes apparent in the film.

We know more or less which art is by Bosch. We know something about his life from Den Bosch city records. However, we don’t really know about the connections between his life and his work.

There are not any writings by Bosch about how he saw his work.

Well, maybe there is one: a sentence in Latin above a drawing, about innovating oneself being better than relying on other people’s innovations. Is that Latin sentence by Bosch? We don’t know. We don’t know Hieronymus Bosch’s handwriting.

The film says that Bosch was an innovator compared to the late medieval artistic status quo, as he introduced phantasy into his work. They might have said as well that he was one of the first artists to depict common people; not just Jesus, angels and people at the top of political or church hierarchies.

The film does say that Bosch lived in turbulent times, but does not dwell extensively upon that.

Alan Woods points out that Bosch’s turbulent times reflect in his art. One year after Bosch died, Martin Luther started the religious Reformation. Already before that, the stability of feudal society had been undermined: by the Black Death plague, by wars, by persecution of ‘witches’, by the rise of the urban bourgeoisie which eventually became rivals of the nobility and Roman Catholic clergy ruling classes.

Woods writes that Bosch sharply criticized the powers that be. Bosch’s art says that in choosing between good, leading to paradise, and evil, leading to hell, also many religious and political authorities choose evil and should burn in hell. Among his many depictions of priests, monks and nuns, not one shows these religious people in a favourable light.

This detail of the right panel of Bosch’s Garden of earthly delights shows a nun with a pig’s body. On the left of the detail is a being, half fantasy animal, half noble knight. A criticism on behalf of the urban bourgeoisie to which Bosch belonged, of the aristocratic and clerical ruling classes?

Bosch’s Hay Wain, as the film The Curious World of Hieronymus Bosch says, depicts greedy people on the way to hell. It does mention that the pope, the emperor of the Holy Roman Empire and kings are among these sinners. But it does not say that Bosch may criticize the clerical and secular powers that be in that.

The film shows Bosch’s painting The Ship of Fools, and comments on it. The film says that people boarding the ship of fools will sail to hell. However, a monk and nuns are prominent passengers on the ship. The film does not comment on that. 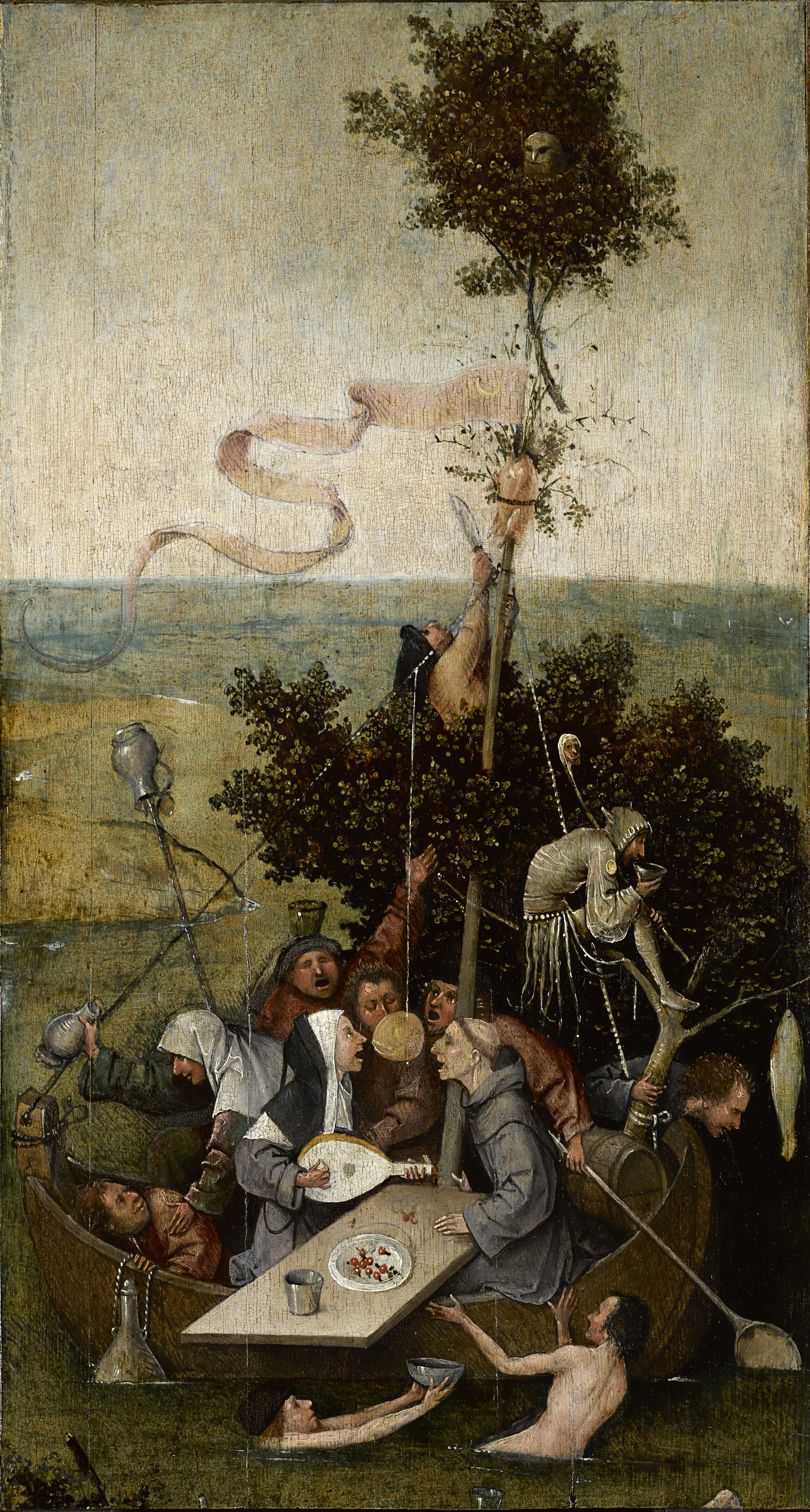 Nevertheless, an interesting film, worth seeing.