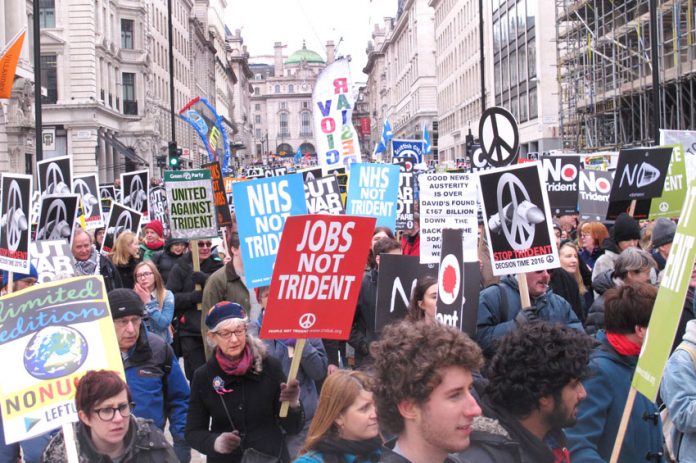 ‘WELFARE not warfare’ chanted protesters from all over the UK on a 60,000-strong Stop Trident march from Marble Arch to a rally in Trafalgar Square on Saturday.

The national demonstration was organised by Campaign for Nuclear Disarmament and was dominated by CND placards and banners with the occasional Unison banner and a lively refugees welcome delegation.

Large numbers of the participants were students and youth. Many trade unionists took part though there were no national union banners on display. The Trafalgar Square rally was addressed by Labour leader Jeremy Corbyn in defiance of opposition to his participation by ex-Labour leader Neil Kinnock and other right wing Labour MPs.

National UK march and demonstration against the renewal of Trident nuclear weapons, organised by CND and supported by Stop the War Coalition.

Corbyn told the enthusiastic crowd: ‘Everyone has the right to speak up for peace.’

He said that if a nuclear weapon was used ‘it would cause mass destruction on both sides’. He added that he had pledged: ‘If elected Labour leader I would be committed to replacing Trident not with more nuclear weapons but with jobs and skills.

‘Scrapping Trident is not a reason for jobs to be lost, but to invest in socially useful jobs and skills. I would like to see resources invested and the dividend we get from peace. You don’t achieve peace by planning for war, grabbing others’ resources and attacking human rights. I am here because of my belief in a nuclear-free future. I stand for a world that meets the needs of the poor and hungry.’

First to speak after an introduction by CND leader Kate Hudson was Unison assistant general secretary Roger McKenzie. He said: ‘They are destroying public services and at the same time they want a weapons system that won”t work. They say they can’t find the money for the NHS yet they can find the money for Trident. We need to go out and tell people to tell the government “put money into public services”.’

Moving on to the next speaker Hudson pointed out that renewing Trident will cost £186bn. SNP leader Nicola Sturgeon said: ‘Renewal of Trident is one of the biggest and most important discussions of this parliament.

‘We demand the scrapping of Trident, it’s immoral and also impractical. Trident does not protect us from terrorism. Osborne has warned of more cuts yet has £167bn for financing Trident, money that should be spent on health and education.’

PCS general secretary Mark Serwotka told the rally: ‘Nuclear weapons are immoral. We also know they do not contribute to the defence of this country. I want to address my colleagues in the trade union movement who say that you have to keep Trident to defend jobs. That’s a lie.

‘Defence workers could do socially useful jobs. Why don’t they nationalise the steel industry and build wind turbines? Why don’t we build housing – people would have homes and workers, jobs. Kinnock said people wouldn’t vote for a party that opposed Trident. He’s wrong. Make much more noise, keep fighting.’

She added: ‘Say no to nuclear weapons, say no to Trident. To all my colleagues in the trade union movement, don’t worry about jobs, if we weren’t building Trident we would have jobs.’

John Boulton of Veterans for Peace warned: ‘Look at what nuclear war means – it means working people unleashing terror on other working people. The rich who benefit will be safe in their towers.’

Plaid Cymru leader Leanne Wood said: ‘The world has been and continues to be an unstable and unpredictable place but there are some values that we should hold on to through peace, through war, through instability and unpredictability.

‘It is never acceptable, it is never justifiable to unleash weapons of mass destruction on a population. Nuclear weapons belong in the dustbin of history alongside the Cold War.’

News Line spoke to several demonstrators as the march assembled. London BECTU member Matthew Hurry said: ‘I’m against Trident, the money would be better spent on the NHS and public services. Trident is not an effective deterrent in any case. I’m opposed to all these wars and to the West’s attacks on Middle Eastern countries in the name of democracy and liberty.

‘The trade unions should stand up and take action, they should be in the forefront of all this. I agree they should call a general strike to bring the Tory government down.

‘I’m opposed to any government action that limits the power of trade unions. The unions must take strike action to defend their rights.’

Bill Noble, Unite union retired section, said: ‘I’m here to do my wee bit against Trident. I’m for a general strike. It should have been done a long time ago. My union, Unite, doesn’t do enough. There has to be some action to get rid of this government. I’m thinking of the future.

‘We need a decent living and a decent wage. All these zero hours contracts – get rid of them. The government just want a casualised labour force with no rights. The way to stop all these cuts is to get them out.’

Unite member Axel Martinez, a charity fundraiser, said: ‘The Unite leader should be here today. We all have to stop Trident. As far as I’m concerned, a nuclear deterrent is an out of date concept.

‘The government should be spending money on social programmes like the NHS, not cutting these. Trident promotes more countries having nuclear weapons. A demonstration like today is important to show that many people are opposed to nuclear weapons. The unions should be in solidarity against Trident. I’m all for a general strike to bring the government down and ending capitalism.’

School youth Conal Longden, 16, from Croydon told News Line: ‘I’m here to oppose Trident, all the money that is spent on war, when it could be spent on healthcare and education.

‘And renewing Trident makes worldwide nuclear disarmament less possible. As a young person, you worry for the future with all the wars and conflicts going on. Everybody should take action and speak up for their principles. The Tory government is not working for your average person, specifically young people – it’s just for bankers, with austerity and all that. We should get rid of it. Union action is important.’

Amy Arnold, a graphic designer from Bicester, said: ‘Trident is something I feel really strongly about. I’ve been a lifelong supporter of CND and my parents were involved in CND. There are far better things to spend money on than nuclear weapons.

‘I’m concerned about the NHS, my children’s future, the direction the country is heading. The rich are getting richer and the poor are getting poorer. I think Jeremy Corbyn is the only one who speaks any sense. The unions should be taking action – a general strike is something that’s got to happen, ideally to bring the Tory government down.’

Bristol student Robert Cogrill: ‘I’m anti-Trident, I really do believe it’s something that should be stopped. The government is spending so much money on weapons they say will never be used when they could be spending that money on healthcare and welfare, just on things that are better for people. I’d like to see them review their decision on Trident.

‘The trade unions should be taking action, everybody should. It’s something that really matters. I’m all for a general strike to put pressure on the government. We’re always being told there’s not enough money to spend on the NHS and yet they’re announcing these massively expensive projects. I’d be for action to bring the government down and go for socialism.’

Gap year student George Penny from Cheltenham, added: ‘I believe Trident is not only morally objectionable but in a time when billions of pounds of austerity cuts are being made, to spend billions on a nuclear weapons system is unacceptable.

‘These billions should be spent on helping people, for example on the NHS. There needs to be political action through parliament and widespread demonstrations and protest actions.’

Dan G a drama student from Surrey, said: ‘We’re here because we want to stand up against the renewal of Trident. It’s about standing up against fear-mongering and the perpetration of conflict.’

Kent University student Dave M said: ‘I’m against the idea that Trident is going to stop terrorism and make this country more secure. I’m for peace – sitting down with countries and talking. The only people who benefit from the renewal of Trident are the companies themselves who produce it.’

Bishops Stortford school student Jake Proctor, 16, said: ‘I think £103bn could be better spent than on Trident. It’s really unnecessary. The money could be spent on the NHS on all manner of things like housing and education.”

Fellow school student Austin Moulton, also 16, added: ‘War is never good. I don’t see the point of nuclear deterrents anyway. These weapons are much stronger than the bombs that were dropped on Hiroshima and Nagasaki in World War Two. Trident should be scrapped.’

By Zoe Streatfield in Britain:

SCOTLAND’S First Minister Nicola Sturgeon vowed to make “immoral” and “impractical” Trident an election issue at the CND demonstration in London on Saturday.

Addressing tens of thousands of peace protesters at the Stop Trident demo in Trafalgar Square, Ms Sturgeon warned that the use of the nuclear weapons system “would bring about human devastation and suffering on an unimaginable scale.”

Ms Sturgeon said that it “is important that while the decision in Parliament is looming, people had the opportunity to make their voice heard” in a peaceful and democratic manner.

Several tens of thousands demonstrated in London Saturday in opposition to the planned renewal of the UK Trident nuclear missile system. The protest was called by the Campaign for Nuclear Disarmament (CND). A parliamentary vote on renewing Trident, which is housed on four submarines located in Scotland, is to be held later this year: here.

FORMER defence secretary Lord Browne came out against Trident renewal yesterday, accusing decision-makers of avoiding discussions on security threats posed by the nuclear programme. Speaking on BBC Radio 4’s World at One show, the Labour peer argued that nuclear weapons have been outgrown by other systems, including technologies developed in Britain. His comments came a day after 60,000 people marched in London against Trident: here.