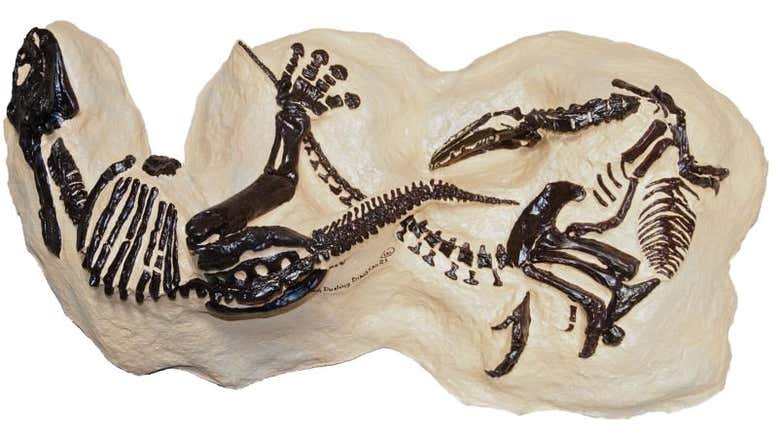 The two dinosaurs are locked in mortal combat, their fossilised bones forever twisted in a fatal struggle. And for a mere $7 million, their tangled remains could be yours.

The duelling dinosaurs are a Nanotyrannus lancensis and a Chasmosaurine ceratopsian. The Nanotyrannus, a predator similar to the ferocious Tyrannosaurus rex (some palaeontologists argue that Nanotyrannus is really a juvenile T. rex rather than a species in its own right) curls around the right of the image while its prey, the herbivorous Chasmosaurine, lies prone on the left. The latter’s elongated skull reveals its similarity to the iconic Triceratops.

These well-matched foes would each have stood around 2.5 metres high and grown up to 10.5 metres long. During their violent struggle they inflicted fatal wounds on each other. Teeth from the Nanotyrannus were found embedded in the skull of the Chasmosaurine, and the Chasmosaurine gave as good as it got: the skull and chest of the Nanotyrannus seem to have been crushed, perhaps by a powerful kick from its intended meal. 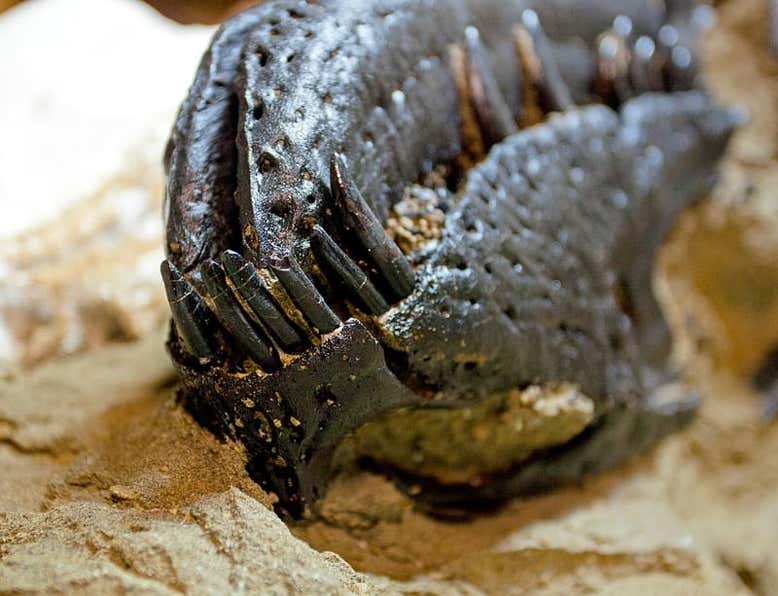 The fossil will be sold at auction by Bonhams in November. “They are one of the most significant dinosaur discoveries ever in North America,” says Thomas Lindgren of the natural history department at Bonhams.

The dinosaurs’ brutal fight to the death was uncovered in the appropriately named Hell Creek, Montana, in 2006. The Nanotyrannus fossil is only the second ever found and is by far the most complete.

The remarkably preserved fossils, a resin model of which appears in the photo, are expected to sell for between $7 million and $9 million – a bargain for a piece of decor guaranteed to strike fear into your enemies.

Mortal combat: Unique duelling dinosaur fossil could be lost to science when it is auctioned for up to £6m

Researchers fear the unique £4.5m find could be lost to science unless sold to a museum

One of the rarest and most expensive dinosaur fossils, comprising a pair of dueling dinosaurs that died in mortal combat some 67 million years ago, could be lost to science when it is auctioned for private sale in November, scientists warned today.

The well-preserved fossil includes the only remains of a new species of predatory dinosaur, which scientists have only just identified, as well as a large, lumbering herbivore which also died when the two creatures were locked together in a fearsome fight.

Bonham’s, the London auction house, is to put the fossil on sale in New York this November and scientists said that it could be lost for future generations of researchers if, as expected, the fossil is sold to a private collector for the expected fee of between $7m (£4.5m) and $9m.

“They are coming out of the ground and they are on the market. Its survival does not depend on a scientist giving a description, it’s based on whether or not the auctioneer’s gavel is going to sell this to a museum where we can access it and complete the story,” said Philip Manning of the University of Manchester.

“If it goes to a private collection, I will have to unlearn what I have seen… It’s important for it to become available to a museum so that we can study it,” Dr Manning told the British Science Festival in Newcastle.

It was originally thought the the predator, named Nanotyrannus lancensis, was a juvenile Tyrannosaurus Rex, the largest land predator to have ever lived. However a re-analysis of the skeleton has shown it to be a distinct species of smaller predator, making the fossil even more important to science, Dr Manning said.

The herbivore has been identified as belonging to the Ceratopsian dinosaurs, which include the three-horned Triceratops, which may have inflicted a lethal head wound on its attacker.

The giant fossil was discovered on private land in Montana’s Hell Creek geological formation where many dinosaur bones dating from the same period have been excavated, including T. rex.

It is only the second fossil to preserve the remains of two fighting dinosaurs but this one is bigger and the skeletons of both animals are almost totally preserved, which is makes them so valuable to science, Dr Manning said.

“Being a complete fossil makes it so astoundingly important because it provides so much information on an organism. The only other dueling dinosaur fossils were the size of greyhounds whereas this is two houses having a fight,” he said.

“Some teeth from the jaw of this thing are actually embedded in the neck of the Ceratopsian dinosaur, which kind of indicates that there was some kind of foreplay at the very least,” Dr Manning told the Science Festival.

“Given that one is predator and one is prey I’m pretty confident that these things were not playing…It was a bad day for both of them. If you’re cornered by a top predator you will do anything not to be eaten,” he said.

“Hopefully the scientific significance of this stunning fossil will not be overlooked amidst the media interest of the sale. This fossil would make the centrepiece of any museum and really deserves a very public home,” Dr Manning said.

Unique dinosaur finds like this should not be playthings for rich men who may not know how to care for them; while scientists and the public would be excluded from learning from them. Like an ancient Egyptian sarcophagus should also not be some millionaire’s plaything. These dinosaurs belong in a natural history museum, eg, in Montana where they were found.

Unearthed in the US, assembled in the Netherlands and on display in England – one of only six relatively complete diplodocus skeletons in the world is to be auctioned. But who buys a 17m (56ft) long dinosaur? Here.