Emergency room physician Dr. Lorna Breen survived the virus herself, but it was the grueling work, her father says, that took a grave toll. 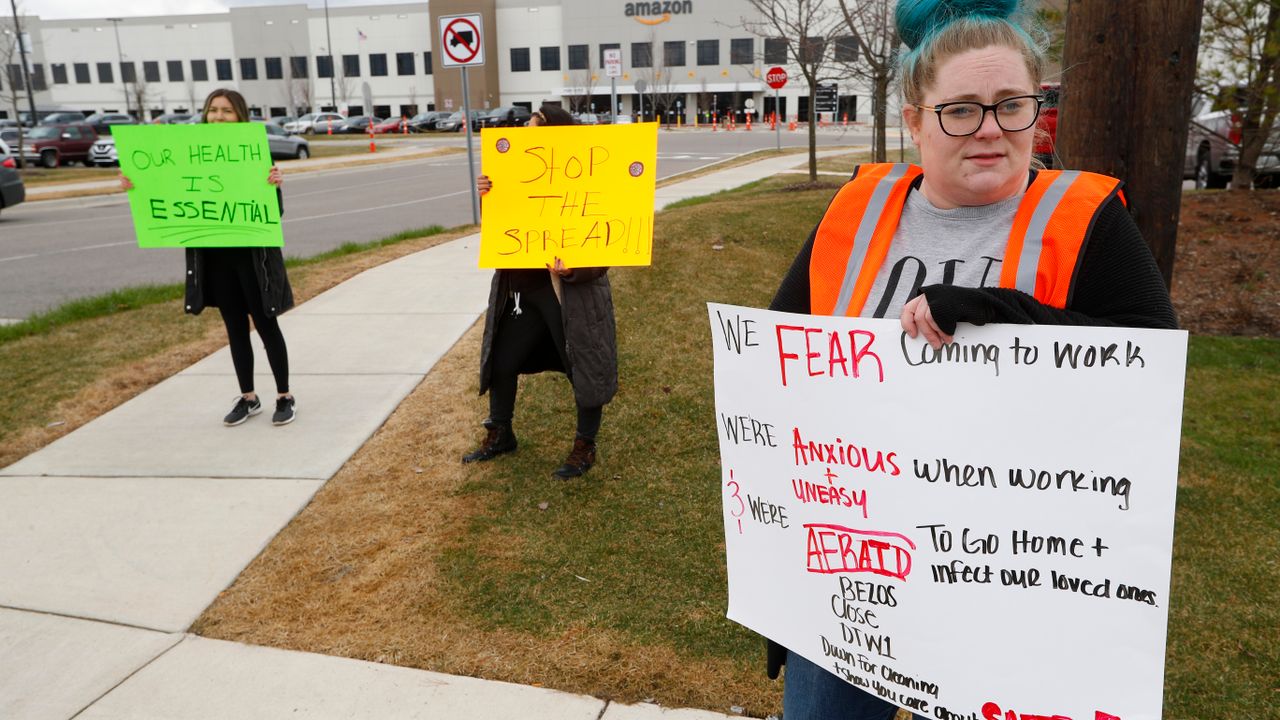 USA: “We don’t want to be the guinea pigs”. Strikes, job actions escalate as corporations rush to reopen amidst coronavirus pandemic. By Jerry White, 28 April 2020. Garment workers in Selma, Alabama, nursing home workers in Illinois and Philadelphia, and Amazon workers in Minnesota are among the latest sections of workers demanding protection from the spread of the virus.

Nebraska businesses to reopen even as COVID-19 infections at meatpacking plants rise at five times the national average. By Colleen Daly, 28 April 2020. Cases of COVID-19 and resulting deaths have spiked in meatpacking plants as Governor Pete Ricketts has refused to issues a state-wide shelter-in-place order, ignoring the advice of the medical community.

Miners with black lung face COVID-19 danger as US mines continue operations. By Samuel Davidson, 28 April 2020. Those with pneumoconiosis face almost certain death if COVID-19 continues to spread through the Appalachian mining region.

The Great Wall Street Heist of 2020. 28 April 2020. 2020 will go down not only as the year of the coronavirus pandemic but also as the year of the greatest act of thievery and plunder yet perpetrated by the corporate and financial oligarchy: here.

California ICE detainee speaks to the WSWS as coronavirus spreads. By Norissa Santa Cruz, 28 April 2020. The WSWS spoke to Jorge, a father of two, about the deadly dangers facing detainees in the midst of the growing coronavirus pandemic.

Although the pandemic continues to rage largely unchecked and none of the health measures needed to stop a “second wave” are in place, Canada’s governments are pushing for a quick “reopening” of the economy: here.

Brazilian nurses go on strike in Manaus amid collapse of health care system. By Tomas Castanheira, 28 April 2020. The strike was a cry of desperation; in addition to the lack of PPE, nurses have not been paid their salaries, in some cases for up to eight months.

Argentinians welcome Cuban medics and denounce US blockade. ARGENTINA urged its citizens to sign a proclamation welcoming Cuban doctors to the country and demanding an end to the crippling US blockade as medics arrived from the socialist island today. Signatories including the president of the Grandmothers of Plaza Mayo – a group that campaigns to find children stolen and illegally adopted under the country’s military dictatorship – Estela de Carlotto and actors Cecilia Roth and Cristina Banega welcomed 200 Cuban health professionals to Argentina as part of efforts to tackle the global Covid-19 pandemic. The statement insisted that Covid-19 requires “unity and solidarity between peoples and nations”, with health a “universal human right: here.

The wave of strikes by thousands of workers in the “maquiladora” assembly factories of northern Mexico has accelerated. The workers are demanding that the factories that employ them shut down and send workers home with full pay for as long as the COVID-19 crisis continues. The strikers are also protesting the crowded and poorly ventilated working conditions in these plants. …

Argentina: Last week health workers from 10 Buenos Aires hospitals picketed in front of the Rivadavia Hospital in Buenos Aires as part of a protest over the severe shortage of personal protection equipment for those that treat patients with COVID-19 symptoms. …

The Service Employees International Union (SEIU) Local 1199 held a news conference April 21 to report that the elderly in Connecticut nursing homes are being hit by COVID-19 cases and members of its union have died. Tom Baril, president of Local 1199 NE, said that roughly 20 percent of the 2,853 COVID-19 deaths in the state as of April 14 have been nursing home residents and that nine members of his union have died while others are in intensive care.

Connecticut’s Democratic Governor Edward Lamont claimed, “We’re going out and doing the inspections in each and every one of these nursing homes, checking what their infection protocols are, making sure they have the PPE that they need.”

But the union said its members in nursing homes face a crisis due to a lack of personal protective equipment. “We continue to see workers fashioning their own PPE out of garbage bags.” …

Nursing homes across the United States are seeing residents succumb to COVID-19 at devastating rates. Nursing homes in Tucson, Arizona and the surrounding Pima County account for 50 percent of COVID-19 deaths. Illinois nursing homes have suffered 35 percent of the state’s COVID-19 fatalities.

Documents reviewed by the website BusinessInsider.com last week revealed that Amazon-owned Whole Foods has developed a sophisticated “heatmap” that warns the company of conditions at its 510 stores that could lead to potential worker backlash or attempts to organize a union. The map calculates scores by combining more than two dozen metrics.

A statement on the map declares, “The Relations Heatmap is designed to identify stores at risk of unionization. “This early identification enables resources to be funneled to the highest need locations, with the goal of mitigating risk by addressing challenges early before they become problematic.”

Among the metrics used are employee “loyalty”, turnover, racial diversity, calls made to human resources, violations recorded by the Occupational Safety and Health Administration and the number of charges filed with the National Labor Relations. Data that is tracked in the vicinity of a store includes unemployment, the percentage of families living below the poverty line, local union membership, distance between the store and the closest union and a log recording organizing and union activity. Also included are average wage compensation, total store sales and workers’ compensation claims.

Workers across Canada who have been deemed essential and not covered by lockdown orders are increasingly recording their fear of virus infection and opposition to unsafe working conditions by absenting themselves from work. Last week, absenteeism rates by meatpackers at JBS in Brooks, Alberta reached levels that threatened the closure of the facility. Up to 1,000 absences have been recorded in a single day.

Management, in an attempt to keep one shift going, have offered a temporary $4 per hour shift premium for the low-paid workforce, but that has only slightly reduced the labor shortage. Two deaths and 156 cases at the plant have been recorded so far. Workers in the packing plants work elbow-to-elbow and face-to-face with little to no effective Personal Protective Equipment.

A majority of employees in many of the plants are immigrants on Temporary Foreign Worker permits with few protections. Other packing plants, like the giant Cargill facility in High River, Alberta, where over 800 COVID-19 cases have been recorded, have temporarily closed to isolate workers and commence “deep cleaning”.

Last Friday, in an attempt to stem the flow of rising absentee rates among long-term home care workers, prison guards and shelter staff, Conservative Premier Doug Ford offered a similar $4 per hour wage increase for the next 16 weeks plus an attendance bonus. Essential workers appealed for the wage hike to be made retroactive to February but Ford rejected the proposal.

Ford’s announcement came in the wake of another catastrophe in a Toronto old age home where 26 residents have died over the past two weeks. Staffing levels at the Mon Sheong home had dropped to 20 percent of a normal shift contingent.

In Quebec, the provincial government announced on April 3 a temporary $4 per hour wage increase for front-line home care workers after the horrendous scandal at the Maison Herron long-term care facility. Without PPE until the final days of the virus crisis, workers began absenting themselves by the dozens.

By March 31, there were only two orderlies in the 134-bed facility along with a handful of personal support workers. Thirty-one deaths were recorded there. Surviving residents were found dehydrated with many lying in their own excrement.

3 thoughts on “Coronavirus update, the Americas”