Around 50 Boeing 737 NG planes have faults, grounded until repair

Crisis-hit Boeing faced fresh safety concerns on 31st Oct. The firm admitted cracks were found in at least 50 of its popular 737 NG planes. Boeing had previously reported a problem with the model’s “pickle fork”, a part which helps bind the wing to the fuselage- prompting US regulators to order immediate inspections of aircraft that had seen heavy use.

Aircraft manufacturer Boeing is again struggling with technical defects in a popular aircraft series. After the troubled 737 MAX, of which two aircraft crashed after problems with a warning system, problems have now been reported with the 737 NG. That is the predecessor of the 737 MAX.

The French press agency AFP reports that Boeing is holding fifty 737 NG aircraft on the ground after reports of cracks. They are in the ‘pickle forks’, parts that attach the wings to the fuselage of the aircraft. Boeing already reported those cracks earlier this month, after which the US American aviation authority FAA called for an investigation.

… The FAA’s request was to check all aircraft that went up more than 30,000 times.

Even aircraft with fewer flying hours seem to have the problem. The Australian airline company Qantas has announced that it does not have 737 NG aircraft that have been deployed more than 27,000 times. Nevertheless, the cracks were found in a plane. Tomorrow Qantas wants to have checked all its own aircraft. Each check takes approximately one hour.

The Australian trade union for aircraft engineers AEA wants Qantas to keep the entire fleet on the ground immediately, but Qantas dismisses that as sensationalism. …

Boeing‘s profit is under considerable pressure due to problems with the Boeing 737 MAX, which has been on the ground for eight months. That happened after two air disasters in a short time, first in Indonesia and in March this year in Ethiopia. The trade dispute between the United States and China also seems to have consequences for Boeing’s production.

This video is the 1948 United States film All My Sons, with subtitles. It is based on the 1947 play by Arthur Miller of the same name.

The Boeing crashes and the criminalization of American capitalism

“There are certain men in the world who rather see everybody hung before they’ll take blame.” ― Arthur Miller’s “All My Sons”

When American playwright Arthur Miller wrote those words in 1947, he was penning a work based on the conspiracy between the Wright Aeronautical Corporation and military and civilian inspectors to approve defective airplane engines for use in World War II. The collusion occurred between 1941 and 1943 and was brought before then-Senator Harry Truman’s investigative committee after workers exposed the scheme. A number of executives went to prison.

In Miller’s play, the chief culprit, Joe Keller, offloads the blame onto a subordinate and later finds out that 21 pilots died as a result of his actions, including one of his sons. Keller commits suicide out of shame and regret.

Boeing CEO Dennis Muilenburg showed no such human emotions when he sat before the Senate Commerce Committee on Tuesday and the House Transportation and Infrastructure Committee on Wednesday. Knowing he had nothing to fear from the Democratic and Republican politicians deferentially lobbing questions at him, he stonewalled and evaded, defending his decision to ignore and conceal multiple warnings from engineers and pilots and rush the deadly Boeing 737 Max 8 into service in 2017.

He even defended the “delegation” of oversight by federal regulators to Boeing itself and called for a further “updating”, i.e., gutting, of regulations.

Within two years of the launch of the new plane, two 737 Max 8 planes had crashed as a result of the malfunction of an automatic anti-stall mechanism called the Maneuvering Characteristics Augmentation System (MCAS), whose very existence had been concealed from pilots. A total of 346 men, women and children were killed.

At this week’s hearings, Muilenburg acknowledged that he knew of the red flags, yet not a single congressman or senator suggested that he, or his coconspirators in the Federal Aviation Administration (FAA), should be criminally prosecuted. Nor did the corporate media.

The first disaster occurred just over a year ago when Lion Air Flight 610 plunged into the sea outside of Jakarta, Indonesia, killing 189 people. The second came five months later, when Ethiopian Airlines Flight 302 nosedived into the ground near Addis Ababa, extinguishing the lives of another 157 human beings.

At Wednesday’s hearing, Muilenburg did not even acknowledge the presence of family members of the deceased who stood behind him holding up photos of their lost spouses, children, parents and siblings. He turned around to face them only after a member of the group demanded that he “look at people when you say you’re sorry”. 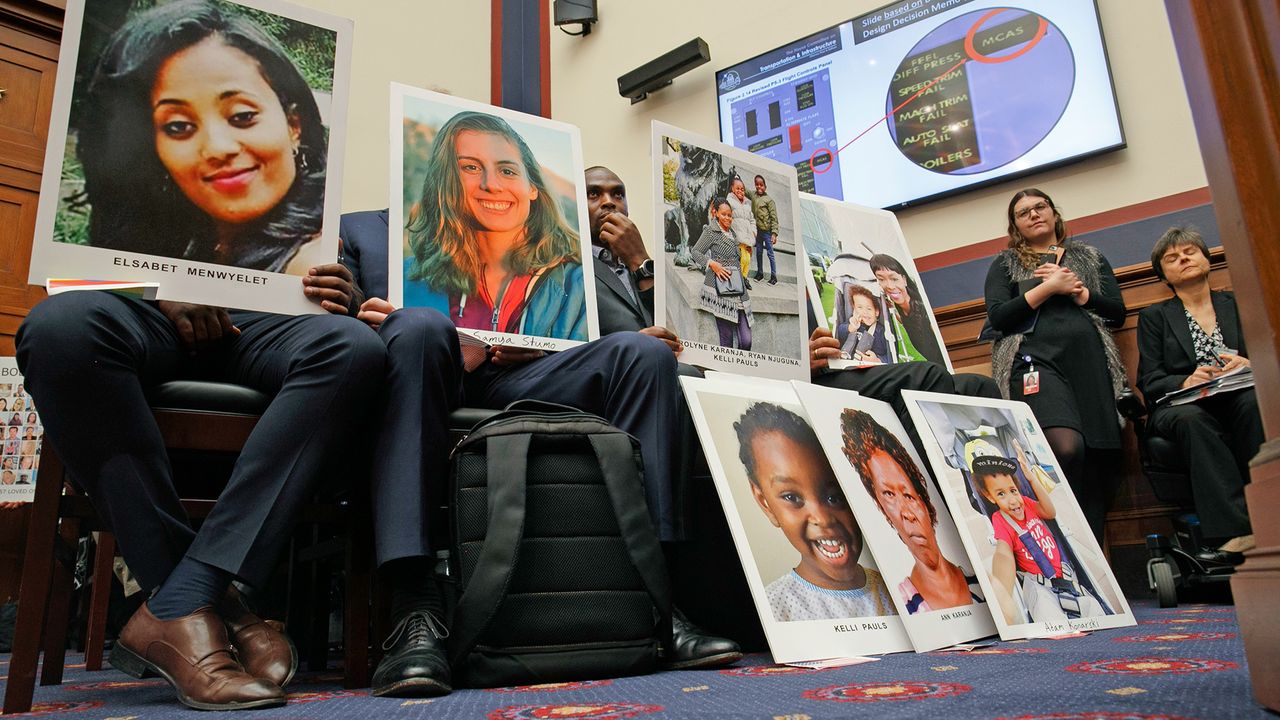 The Max 8 crashes were not simply accidents, they were crimes. They were the outcome of the criminalization of the American corporate ruling class.

Investigations by both Indonesian and Ethiopian flight safety officials have concluded that both Boeing and the FAA were culpable in the crashes.

By now, facts have emerged, some of which were raised at the hearings, which demonstrate incontrovertibly that Boeing knowingly put into service an aircraft that was not safe. These include:

All of these crimes of commission or omission flow from Boeing’s subordination of all considerations, including safety, to profit. This is not unique to the aerospace manufacturer, but the basis of the entire capitalist system. The lives lost along the way are just the cost of doing business.

While the grounding of the Max 8 and lawsuits by pilots and relatives of victims are expected to cost Boeing $8 billion, the company increased in value by nearly $200 billion from the time that the deathtrap was announced in 2011 to when the planes were grounded.

The anarchy and irrationality of the capitalist market have been given unbridled rein by the deregulation of the airline industry—and every other sector of the capitalist economy—which began under Democrat Jimmy Carter in 1978 and has continued under both Democrats and Republicans for the past four decades. It is of a piece with the financialization and deindustrialization of the economy and the destruction of jobs, wages and social services.

For his part, Muilenburg laid off 16,000 workers in 2016 and 2017, his first two full years as CEO. As a reward, he draws a salary of $30 million a year. This year, nearly a third of his compensation has come from selling off a sizeable chunk of his Boeing stock a month before the Ethiopian Airlines crash.

Like many mega-corporations, Boeing occupies a strategic position in the global operations of American imperialism and is tightly integrated into the state military/intelligence apparatus. It is the largest US exporter and second-largest defense contractor. It is on the front lines of the mounting trade conflict with Europe, in which Boeing faces off against Europe’s Airbus. Since Trump’s election, it has more than tripled its stock price, spearheading the massive run-up on the Dow that has bolstered the fortunes of the American ruling elite.

Boeing is only one example of the lawlessness of the operations of big business. The recent past has seen the BP oil spill, the lead poisoning of Flint, the opioid epidemic, the wildfires and power outages linked to PG&E and the Wall Street crash of 2008. Not a single CEO has gone to jail as a result of these disasters driven by corporate greed and criminality. As Obama’s attorney general Eric Holder told Congress in 2013, America’s corporate barons and their business empires are “too big to jail”.

These are not aberrations or the products, at root, of subjective avarice—although blind greed exists in abundance. The criminalization of the American ruling class is the product of the degeneration and crisis of the entire social and economic system of capitalism.

The Boeing disasters underscore the need to put an end to capitalism and replace it with socialism, which is based on the satisfaction of social need, not private profit. This means mobilizing the working class to expropriate the private owners of the banks and major corporations and transform corporate giants such as Boeing into publicly owned and democratically controlled utilities. It means ending the dictatorship of the corporations over the workers and placing the control of economic life in the hands of the producers.

The entire political system and both bribed parties of big business … will oppose this to the bitter end. To establish safe, efficient, comfortable and affordable air travel requires the independent and revolutionary mobilization of the working class in the US and internationally in the fight for socialism.

2 thoughts on “Boeing aircraft unsafety, yet another scandal”