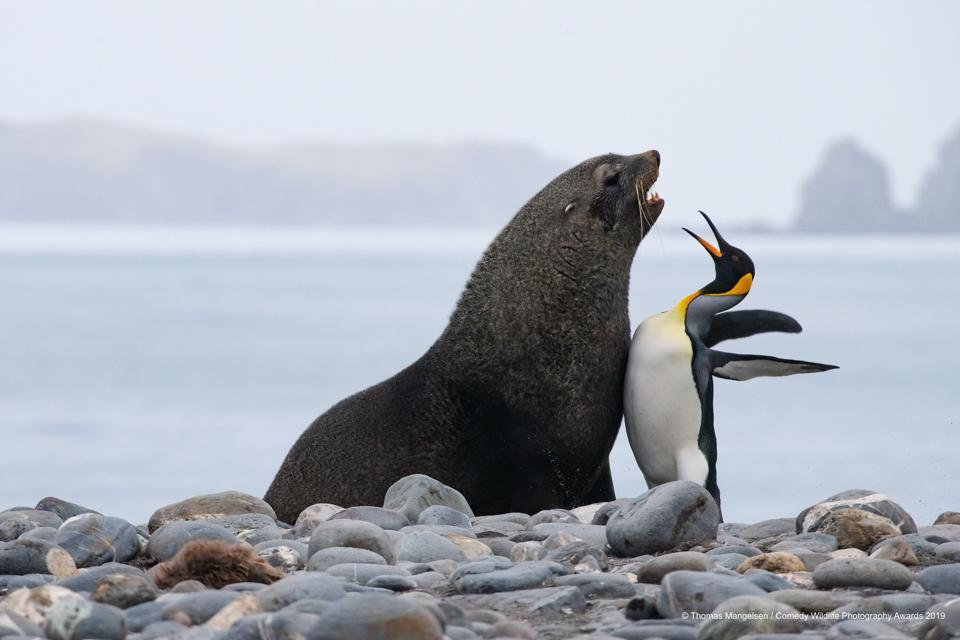 This comical photo shows a king penguin quarrelling with a southern elephant seal. It is one of the finalists of the 2019 Comedy Wildlife Photography Awards.

The Brabant Natural History Museum in Tilburg, the Netherlands writes about it (translated):

Recognizable! That’s what you think when you look at the photos of the international Comedy Wildlife Photography Awards. A nosey seal with a weak smile, two sea otters where it seems that one is trying to save the other, or a marital fight between two exotic birds [European bee-eaters], one of which seems to think his or her own thoughts about it.

At least you have to smile about it. And that is precisely the power of the photos: humour to draw attention to – international – nature conservation. Even better when you see them all together.

Dancing bears and lions, a philosophizing monkey and a dreamy squirrel. The prize-winning photos of the Comedy Wildlife Photography Awards, prizes for the most comical animal photos of the year, are coming to Tilburg! The irresistible images can be seen in the sperm whale hall from November 14 on. Also special, because the photos can only be seen in a few places in the world in exhibition form. A great opportunity to show how nice nature can be. The museum immediately seized the opportunity to bring the exhibition to the Netherlands for several years.

With the photo competition, Comedy Wildlife Awards supports the Born Free organization, which is committed to animal protection and welfare. With the competition they call attention to wild animals and the preservation of their living environment. And with the sale of the photos via an auction, they raise money for the Born Free Foundation and the local project Natuur om de Hoek. This allows children to get to know nature in their own neighbourhood on the basis of questions, research and experiment.