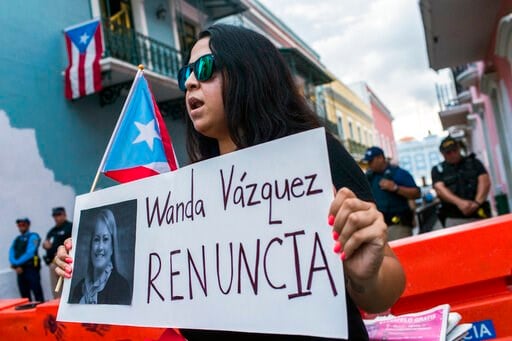 SAN JUAN, Puerto Rico – Puerto Ricans braced for more political turmoil Thursday as the third governor in a week took charge of this U.S. territory still divided over who should lead the economically struggling island of 3.2 million people.

The swearing in of Justice Secretary Wanda Vázquez as governor was expected to spur renewed protests since many Puerto Ricans see her as an extension of Ricardo Rosselló, who resigned the governorship after weeks of street demonstrations demanding his removal. …

Vázquez, who has worked in the government for more than 30 years, stepped into the position Wednesday when Puerto Rico’s Supreme Court declared that the assumption of the office on Friday by Rosselló’s pick, Pedro Pierluisi, was unconstitutional.

“Puerto Rico is living its most important juncture of its democratic history,” Supreme Court President Maite Oronoz wrote in her opinion. “The summer of 2019 will be remembered as the moment without precedent in which Puerto Ricans – of all ages, ideologies, backgrounds and creeds – threw themselves into the streets to demand more from their government.”

The court settled the political dispute over who will lead Puerto Rico after its establishment was knocked off balance by the huge street protests spawned by anger over corruption, mismanagement of funds and a leaked obscenity-laced chat in which Rosselló and several top aides disparaged islanders.

Vázquez, a 59-year-old former prosecutor, is the second woman to be governor and is to serve out the remainder of Rosselló’s term until elections in November 2020, but at least some of those involving in the anti-Rosselló protests are calling for her ouster, too. Critics of Vázquez say that she was not aggressive enough as justice secretary in pursuing corruption investigations involving members of her New Progressive Party and that she did not prioritize gender violence cases.

The new governor did not speak to reporters after she was sworn in at a ceremony accompanied by her daughter and her husband, Judge Jorge Díaz. …

A small group of protesters gathered earlier outside the governor’s mansion in San Juan’s colonial district calling for Vázquez to resign and yelling: “There’ll be no peace as long as there’s impunity!” The crowd remained calm as onlookers including tourists took pictures and video of them.

“Especially the young people,” she said. “It should be the people who choose the governor, not the party.”

Those who oppose the new governor also mention how the Office of Government Ethics received a complaint in November about possible ethical violations by Vázquez, who was accused of intervening in a case involving a suspect charged with stealing government property at a home where her daughter lived. She appeared in court to face charges including two violations of a government ethics law, but a judge ruled in December there was no evidence for her arrest.

Pierluisi was briefly governor after he was appointed by Rosselló to fill the vacant secretary of state position while legislators were in recess. On Friday, the House approved his nomination to the job, which is first in line to replace a governor who leaves office, and he was sworn in as governor after Rosselló formally resigned. But Puerto Rico’s Senate then sued to challenge Pierluisi‘s legitimacy as governor, arguing that its approval was also necessary. The Supreme Court decided in favor of the Senate.

Rosselló resigned following nearly two weeks of protests after the public emergence of the chat in which he and 11 other men, including government officials, mocked women, gay people and victims of Hurricane Maria, among others. More than two dozen officials resigned in the wake of the leak, including then Secretary of State Luis Rivera Marín.

“We’re going to be including it in our courses,” she said. “This is definitely a decision for the ages.”

Originally, Wanda Vázquez did not want to succeed Rosselló, knowing how much resistance there was against her.

7 thoughts on “Third corrupt Puerto Rican governor within a week”