Close to 100,000 Puerto Ricans took to the streets Wednesday chanting “Ricky Renuncia!” as they called for the resignation of Governor Ricardo Rosselló, following the leak by Puerto Rico’s Center for Investigative Journalism of hundreds of misogynistic, homophobic and violent text messages between Rosselló and members of his Cabinet.

On Monday, Denis Márquez of the Puerto Rican Independence Party introduced formal complaints against the governor and called for his impeachment. All of this comes as former Education Secretary Julia Keleher and five others have been arrested on charges of steering federal money to unqualified, politically connected contractors. We speak with Melissa Mark-Viverito, interim president of the Latino Victory Project, and, from San Juan, journalist Juan Carlos Dávila, Democracy Now!’s correspondent in Puerto Rico.

Juan Carlos Dávila, Democracy Now!’s Puerto Rico correspondent, has been on the ground reporting in San Juan where protestors have amassed by the tens of thousands calling for Governor Ricardo Rosselló’s resignation over scandal and corruption. But Dávila says that outrage against Rosselló is representative of a broader struggle that consolidates “years of neoliberal policies that have been implemented in Puerto Rico” — a struggle that has now reached its boiling point.

Over 100,000 in Puerto Rico demand resignation of governor as protests continue

The sixth day of mass protests in Puerto Rico involved more than 100,000 people on Thursday. These erupted after nearly 900 pages of leaked text messages involving the Governor of Puerto Rico and his cabal of functionaries exposed the contempt of the political establishment towards the 3.2 million islanders who have suffered from relentless austerity measures dictated by Wall Street, on top of the devastation caused by Hurricane Maria in 2017. 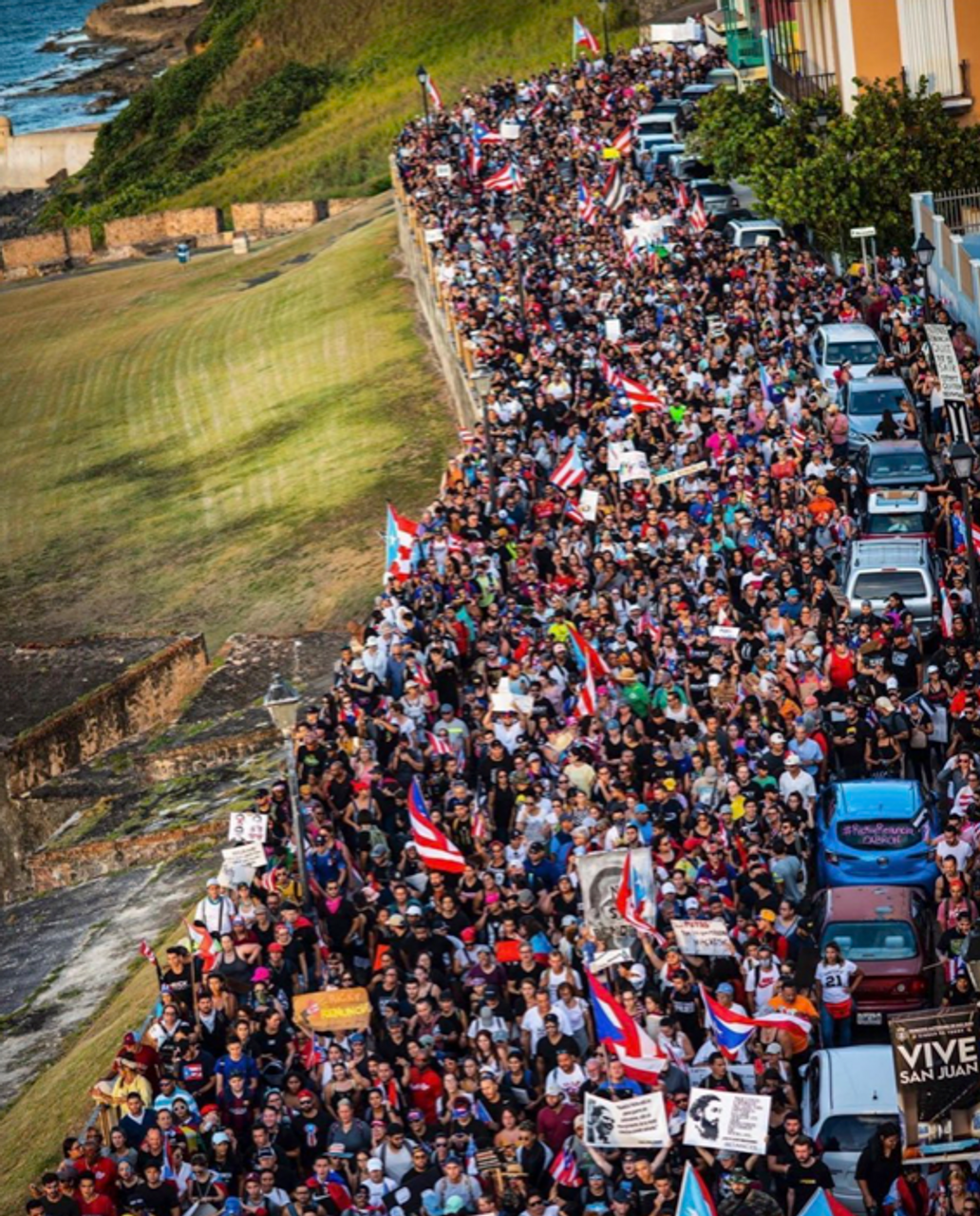 The mobilization of workers and students against Governor Ricardo Rosselló is one of the largest in the history of the US territory. The protests have spread into cities on the US mainland where there are large Puerto Rican populations, including in Florida, New York, Washington DC and California.

Despite immense pressure, Rosselló, a 40-year-old leader of the New Progressive Party (PNP), has refused to resign or abandon the governor’s mansion, known as “the Fortress.” Instead the governor has unleashed the police, who have reportedly fired rubber bullets and released tear gas in the crowds, injuring dozens.

The defiance of this state repression and the continuing spread of the protests has struck fear in the ruling class on the island and beyond. President Trump tweeted, “A lot of bad things are happening in Puerto Rico,” and said the “Governor is under siege.”

In an article titled, “Puerto Rico is in chaos, and some worry continued instability is a major threat,” the Washington Post quotes the president of Puerto Rico’s lawyers association, Edgardo Roman, who notes that “the survival of the political system as we know it is at risk.”

Rosselló is a MIT-trained politician and delegate for Obama at the 2012 Democratic Party convention who nominated a Republican as the island’s Resident Commissioner, or non-voting member of the US House of Representatives. He cozied up to Trump after the hurricane, making no criticisms of the president’s photo-op visit to the island where Trump contemptuously tossed paper towels at hurricane victims and told them they had not suffered a “real catastrophe” like Hurricane Katrina in 2005. The president later praised Rosselló for “not playing politics.”

In Trump’s tweet on Thursday the president claimed, “[T]he United States Congress foolishly gave 92 Billion Dollars for hurricane relief, much of which was squandered away or wasted, never to be seen again.” He singled out for criticism San Juan Mayor Carmen Yulín Cruz, who he said was “a despicable and incompetent person who I wouldn’t trust under any circumstance.” Cruz, a member of the Popular Democratic Party (PPD), criticized the Trump administration’s inept response, saying the federal government is “killing us with inefficiency” and warning of “genocide”.

While the entire political establishment on the island … share responsibility for the ongoing disaster, Trump’s claim that the US government sent $92 billion to the island is a fiction. Washington approved only $42 billion, and of that only a fraction, $13 billion, was ever delivered. As a result, nearly 5,000 Puerto Ricans died, according to a study by Harvard University. To this day, hundreds of thousands continue to suffer from lack of basic necessities, including proper shelter, as many remain unable to repair their roofs.

While the scandal of the leaked texts from Rosselló and 11 other members of his administration was the catalyst for the mass protests, social tensions on the island had been brewing for years. What has brought masses of people onto the streets is not simply “corruption” … . Like workers all over the world, workers on the island are rebelling against relentless austerity and social inequality.

They are fighting the Financial Oversight Board, a financial dictatorship imposed by the Obama administration, and the privatization of public assets, including the electric company, as well as the public schools, which have been championed by Trump’s education secretary Betsy DeVos.

Just prior to the leaked texts, another corruption scandal exploded when the island’s former Secretary of Education Julia Keleher and several close associates were arrested by the FBI and indicted on charges of laundering $15.5 million in federal money between 2017 and 2019.

Keleher was responsible for closing over 263 public schools—20 percent of the island’s public schools—and replacing them with charter schools, which were illegal until 2018. Declaring the island a “laboratory” for [Trump’s Secretary of Education] DeVos’ privatization schemes, Keleher oversaw the layoff of 5,000 teachers and displacement of over 75,000 students while amassing a small fortune of $250,000 a year, which was higher than any government official in Puerto Rico and higher than even Betsy DeVos’ own salary. In the wake of Hurricane Maria, she used a foundation donation to the island to raise it even higher, to $400,000 a year, the same salary as the US President.

In the same way, a faction of the local government exploited the hurricane to push through the privatization of the Puerto Rico Electric Power Authority (PREPA).

Bernie Sanders tweeted Thursday, “I stand with the people of Puerto Rico taking to the streets to demand accountability for the governor and an end to corruption.” He continued, “Puerto Ricans have a right to democracy and full federal support to get out of this crisis.”