NEW YORK, October 25, 2018 — This panel presentation and discussion explores the idea of representing the “progressive” Indian nation through visual, literary, and performing arts by concentrating on the artists included in The Progressive Revolution: Modern Art for a New India.

By Josh Varlin and Evan Cohen:

The Progressive Revolution: Modern Art for a New India

The Progressive Revolution: Modern Art for a New India; an exhibition at the Asia Society Museum, New York City through January 20, 2019, curated by Dr. Zehra Jumabhoy and Boon Hui Tan. 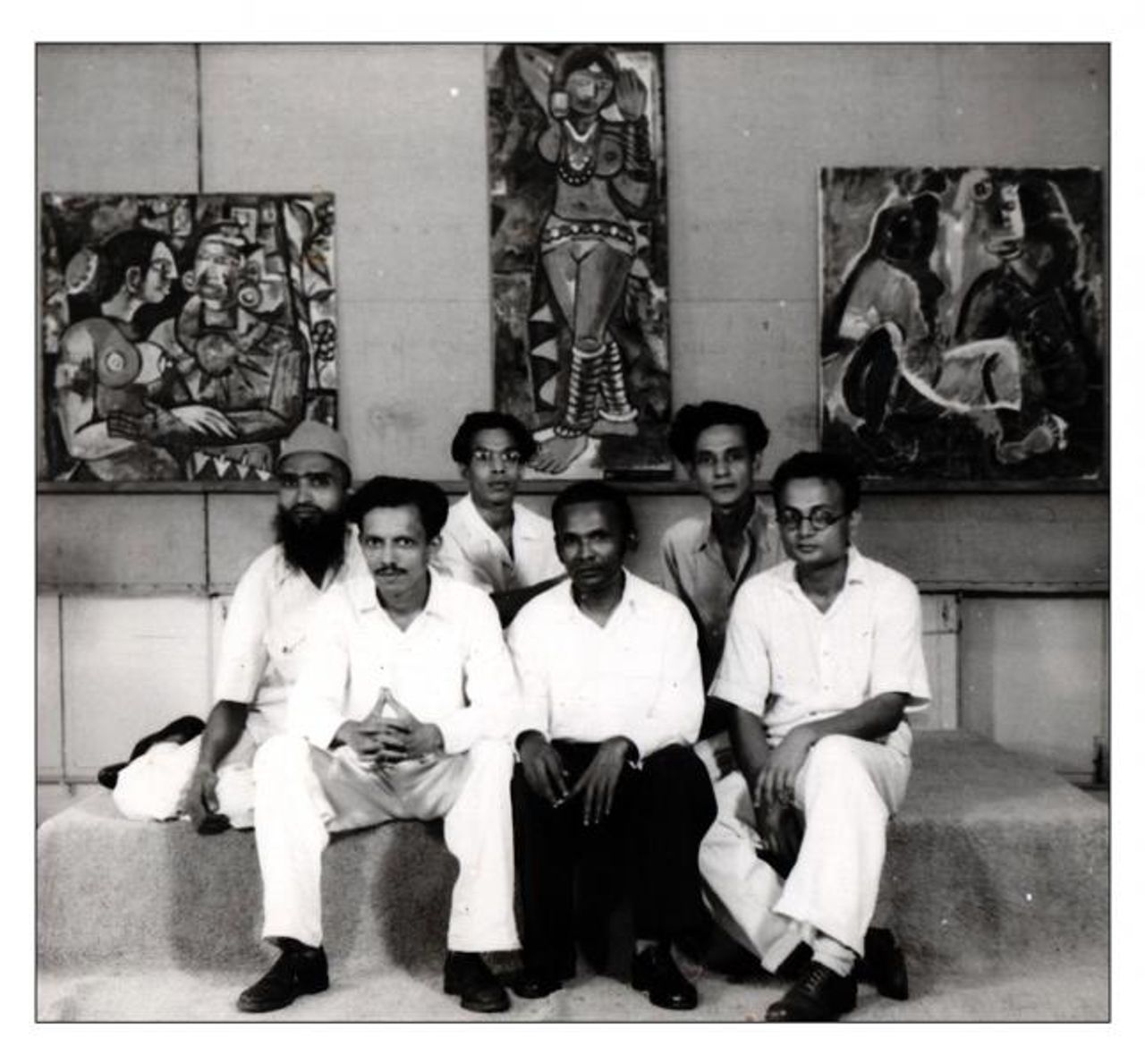 The Progressive Revolution: Modern Art for a New India, an exhibition at the Asia Society Museum in New York City on the Progressive Artists’ Group (PAG), was a valuable opportunity to view works from one of the most significant groups in Indian modern art. The PAG was founded in 1947 in Bombay (now Mumbai) by several left-leaning artists. After many of its members left India, it disbanded in 1956.

The Progressive Revolution is the first time the original PAG members’ art has been exhibited together outside of India.

The PAG was formed in 1947 and worked in the immediate aftermath of Indian independence and the communal partition between a predominantly Hindu India and an explicitly Muslim Pakistan, during which up to 2 million people were killed in communal violence and 18 million moved across the new borders in the largest human migration in history. The art the PAG produced during this tumultuous period stands as a powerful indictment of communalism, discrimination and the legacy of imperialist domination of the Indian subcontinent.

At the same time, it expresses the hopes of millions that independence would open up a new era of secular and democratic development for India, while articulating limited misgivings about the newly independent India, which saw power transferred to the native bourgeoisie and its Indian National Congress (INC).

This contradictory outlook was a product of the nature of Indian independence. In the last decade of the British Raj, the working class on the subcontinent, inspired by the Russian Revolution, emerged as the major force opposing British imperialism. This process was epitomized in the Quit India movement. This very development caused the Indian bourgeoisie (both Hindu and Muslim) to recoil in terror, relying on communal politics to divide the working class and securing independence via the imperialist-brokered Partition accepted by the bourgeoisie.

The group included artists from different social and religious backgrounds. Souza, who was briefly associated with the Communist Party of India (CPI) and did much of the writing for the group, was from a poor Roman Catholic family in Portuguese Goa. Souza was also involved in the Quit India movement. Ara was the son of a driver from the oppressed Dalit (“Untouchable”) caste, and he was a domestic servant when he began painting. Raza was the son of a forest ranger. Husain was a secular Muslim.

What brought these artists together amid the tumultuous end of British colonial rule was a rejection of staid academic art and the backward-looking, sentimental nationalist art of other Indian artists of the time, including the influential Bengal School of painting. Instead, they synthesized European modernist, Post-Impressionist and Expressionist techniques and the visual tradition of ancient Hindu, Punjabi, Jainist, Muslim and Buddhist art (and other Indian and Asian influences) into a bold break with the conventions of the Indian and British art worlds of their time.

While the PAG set out to create a new, secular art for the new Indian nation, many of the pieces featured in the Asia Society’s show, and many of the movement’s strongest works, show the failures of the Indian national project and proudly display the international cross-pollination that is fundamental to the birth of modern art.

Throughout the exhibit, paintings that borrow from and update traditional Hindu imagery are exhibited next to historical examples from the Asia Society’s collection. While some of these pairings suggest that the PAG reached back to discover an essential “Indianness”, others suggest that the artists’ influences went far beyond national folk traditions, and combined influences from across Asia and the world. The exhibit’s section “National/International”, for instance, suggests that the PAG’s works, as well as the work of European and American modernists, were valuable products of cultural exchange among sensitive artists expressing the upheaval and the contradictions of the post-war era.

Among the paintings that express the social divisions in post-independence India, some of the most successful are F. N. Souza’s Tycoon and the Tramp (1956) and Ram Kumar’s Unemployed Graduates (1956).

Tycoon and the Tramp is a large oil portrait of the two title figures: the tycoon is a pallid, corpse-like man in a blue suit and shirt and tie, with a small, bemused smirk perched atop folds of fat; the tramp is a slight man wearing dark red and black clothing, with a thin, wispy beard, his face a deep red, with a blank, removed expression.

Both figures are outlined in heavy, rough, glossy black lines that foreshadow Souza’s later works—his violently crosshatched women and grotesque figures of Christ. They stand against an abstract, light green and sickly yellow textured background, and their eyes, framed by heavy lines and shadows, stare across the center of the image. Souza’s painting is a stark expression of the class divisions between the parasitic bourgeoisie and the working class that remained entrenched in the new India. 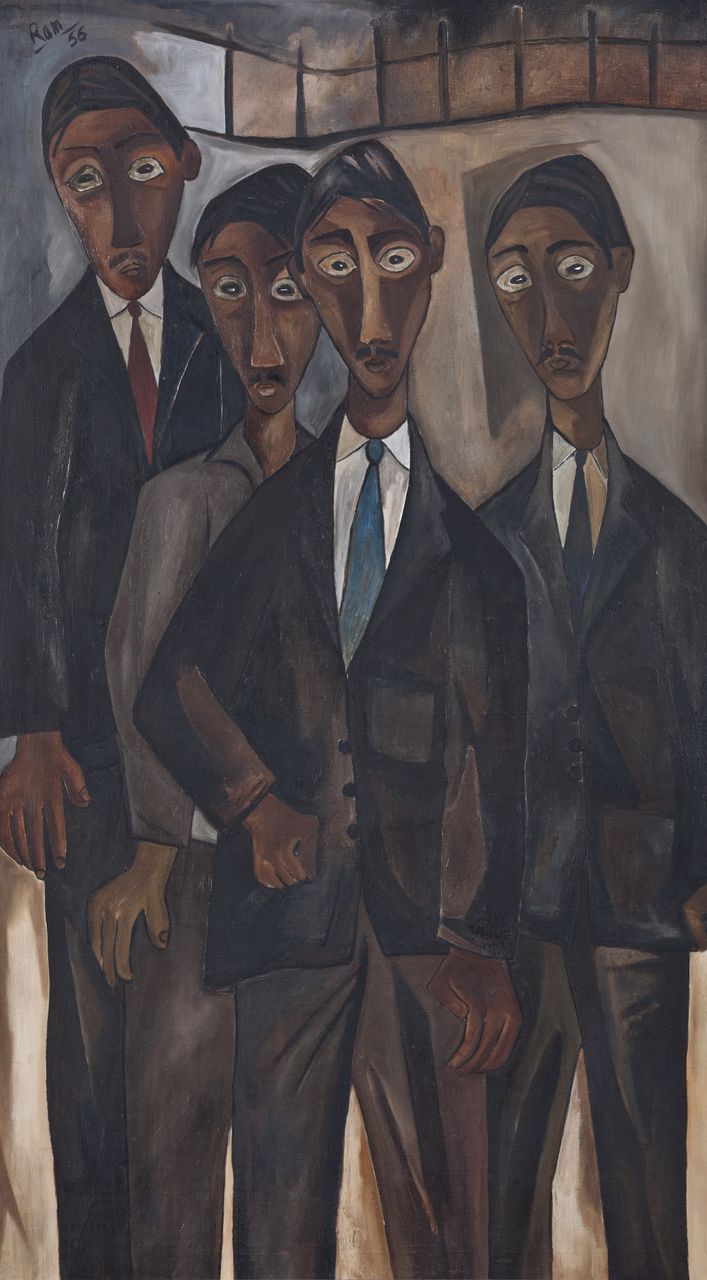 Kumar’s Unemployed Graduates, completed after his return to India from Paris, is an oil painting of four ghostly young men in suits that hang off their gaunt, elongated bodies. The students’ faces are long and rendered, like the majority of the painting, in dull browns and grays. Of particular interest are the students’ eyes, which are abstracted into white and black ovals sunken into their faces. Unemployed Graduates is a haunting evocation of the economic struggles of ordinary people in post-independence India. 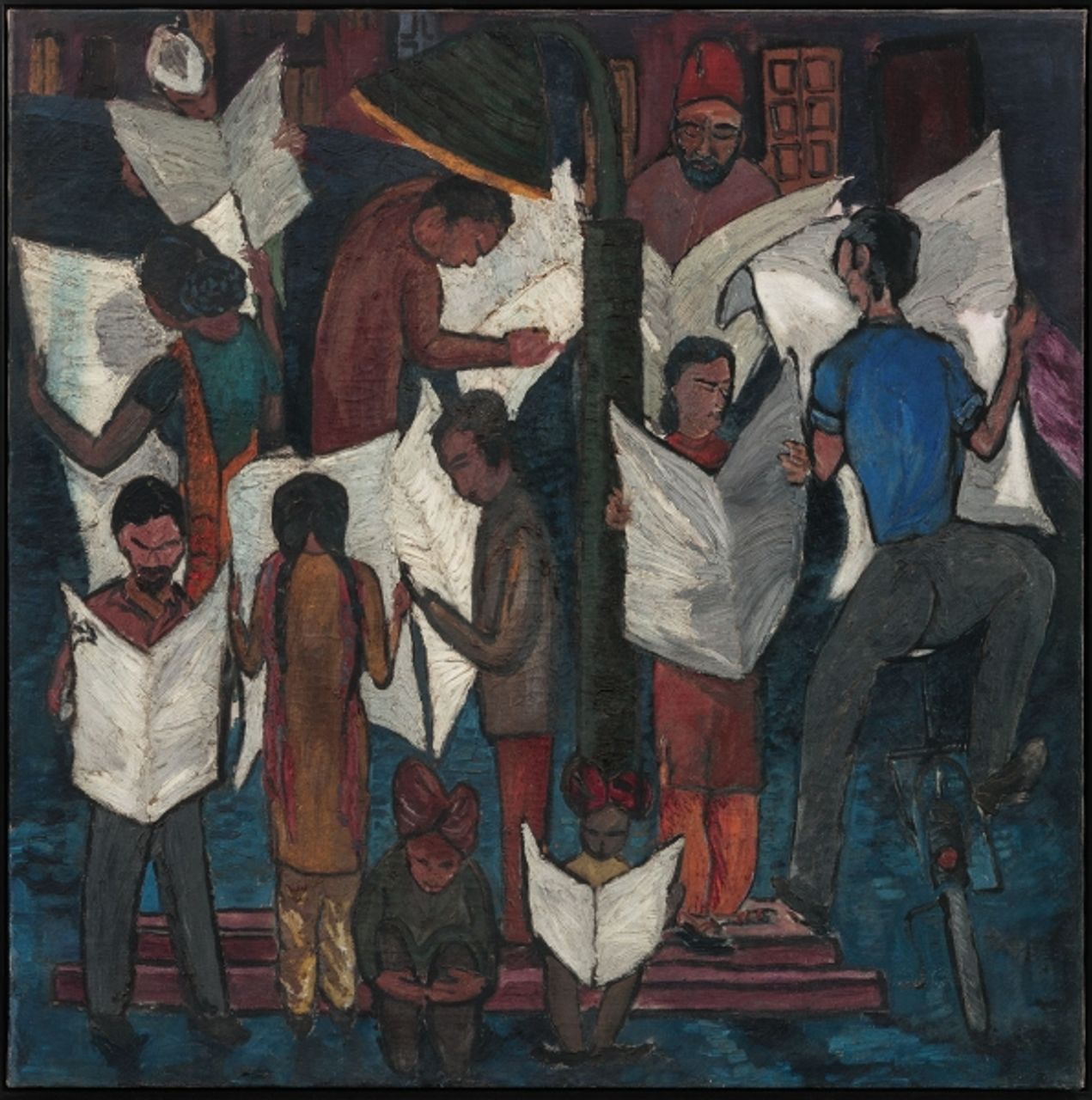 Krishen Khanna’s News of Gandhiji’s Death (1948) is a sorrowful depiction of Indians from various backgrounds gathered under a lamppost reading newspapers carrying word of the assassination of Mahatma Gandhi at the hands of a right-wing Hindu nationalist. Reflecting the sectarian tensions Khanna feared, no one is reading together or discussing, but each, with his or her own paper, is reflecting.

The figures have muted facial features, with attention instead drawn to their stooped postures and garb depicting them as Muslim, Sikh or Hindu, all united in their grief over the assassination. The colors are dull, and the scene is surrounded by darkness. The figures holding newspapers are distributed about the canvas to form the rough shape of the Indian subcontinent. While not as emotionally evocative, in these reviewers’ opinions, as The Anatomy Lesson, which would come later, News of Gandhiji’s Death reflects the PAG’s contradictory misgivings about, and illusions in, the Indian national project. 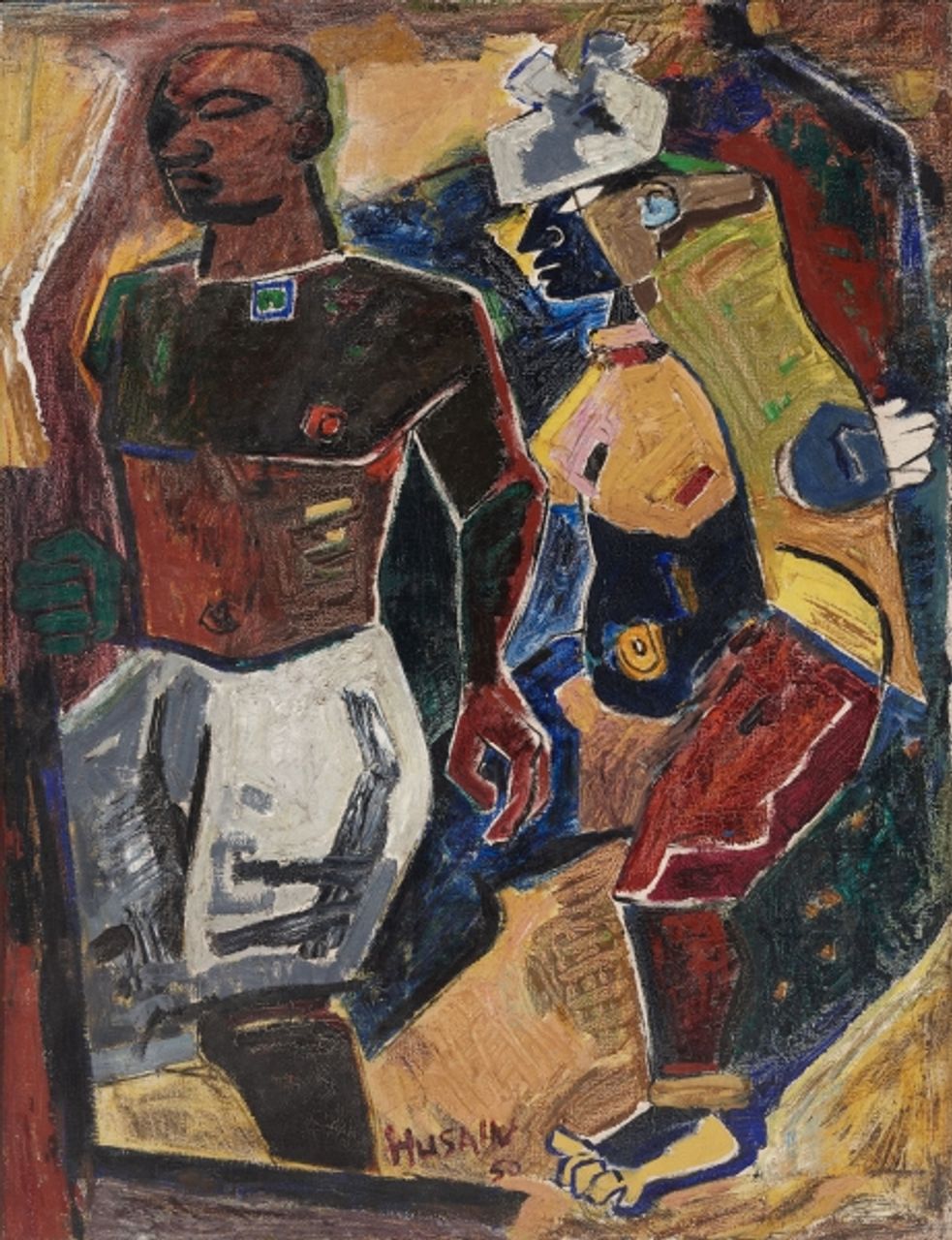 Husain’s Peasant Couple (1950) is a painting of a man and a woman striding forward. The woman seems to be carrying something on her back, while the man seems to hold a tool or farming implement. The color palette is mostly earthen colors, with some vibrant splashes on the woman’s clothes. The unusual, more abstract depiction of the woman’s figure contrasts with the more realist depiction of the man’s, but both figures are distorted as if seen from many viewpoints, the shapes and colors of their clothing and bodies combining with the background into a collage from which the couple are emerging.

Peasant Couple seems to emphasize the Nehruvian ideal of “unity in diversity”, enhanced by the use of people from a rural area and the depiction of a woman, both associated with depictions of India qua India. Though an effort to turn toward the peasantry as a subject matter showcasing an “authentic” Indian national identity, the painting is also a successful and evocative combination of Cubism and Expressionism—a bold leap away from the sentimental nationalist paintings of the Bengal Art School. 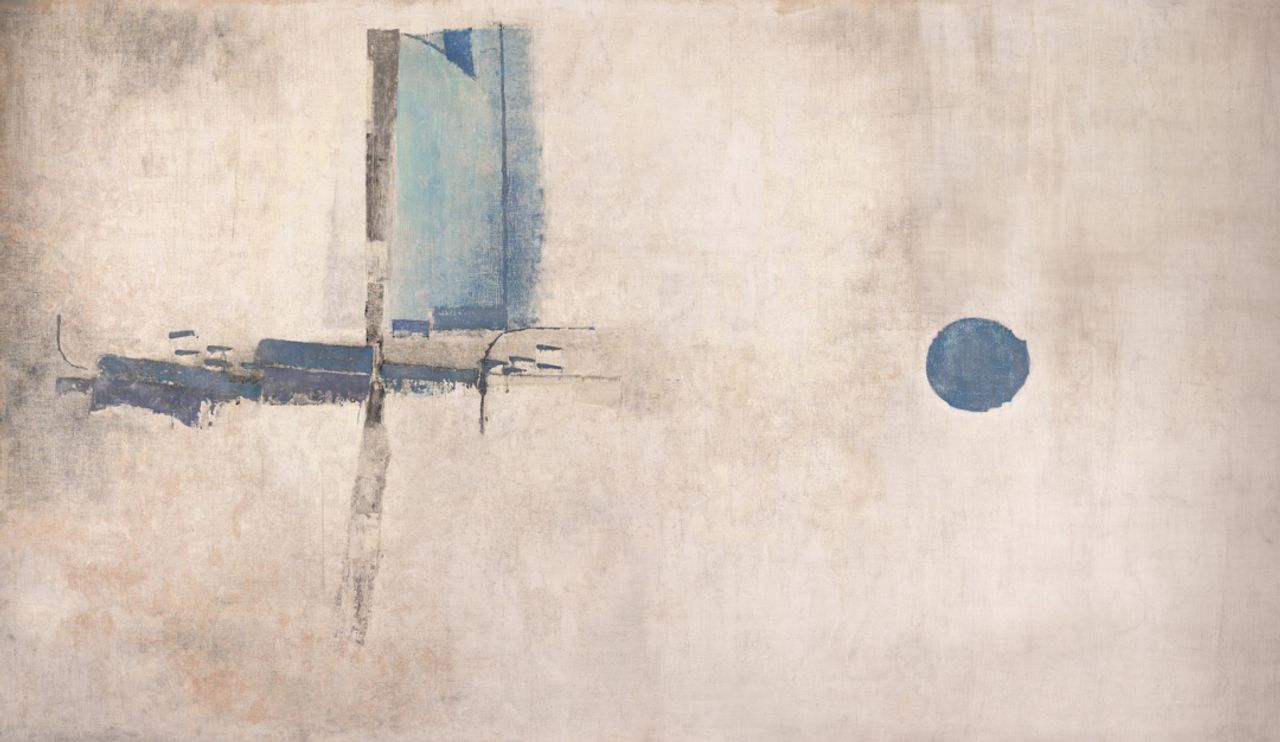 V. S. Gaitonde’s work was more abstract, with many of his paintings seeming at once austere and vast. An untitled work from 1962 is haunting, seeming to depict either a bird or a ship in an expanse that threatens to engulf the viewer as well. The subdued grays and blues add to the isolating effect. Gaitonde, like many European artists of an earlier generation, was influenced by Japanese art and ancient calligraphy. Gaitonde combined his influences into non-objective meditations not unlike Mark Rothko’s work, but with an emphasis on single colors and experiments with texture. 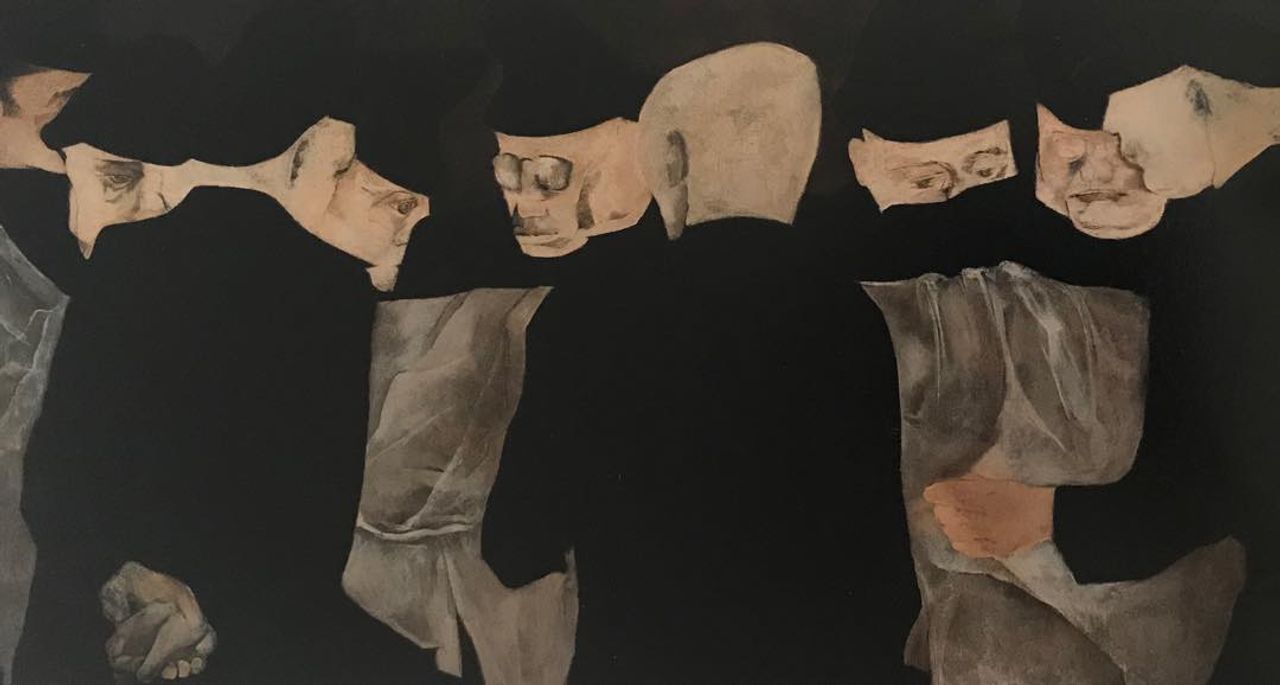 Khanna’s 1972 work The Anatomy Lesson is one of the most successful comments on the bloody wars and partitions of the Indian subcontinent coming from artists associated with the PAG. The Anatomy Lesson was painted in the aftermath of the Indo-Pakistani War, which resulted in the bifurcation of Pakistan, the creation of Bangladesh, the military predominance of India, an intensification of religious and ethnic tensions, and mass deaths and atrocities on each side.

The painting is a menacing update to Rembrandt’s 1632 masterpiece The Anatomy Lesson of Dr. Nicolaes Tulp.

This 2015 video says about itself:

The article on the New York City exhibition continues:

Instead of a social event for well-to-do onlookers, Khanna’s work depicts a menacing group of pale, sharp-faced military figures preparing to dissect a shrouded human figure. The work’s cold pallet and monochromatic rendering of military officials condemns the Indo-Pakistani War of 1971 and its immense human toll.

The PAG expressed in artistic form the genuine democratic and anti-imperialist strivings of the masses on the Indian subcontinent. However, its fate demonstrates the inability of the Indian bourgeoisie—or the bourgeoisie in other countries historically oppressed by imperialism—to achieve the great democratic tasks tackled by the bourgeois revolutions of an earlier era, such as the French Revolution.

When it took power as a result of the communal Partition, the Indian National Congress legitimized its rule in the large, multi-ethnic and multi-religious country by appealing to secularism and the slogan of “unity in diversity”, in contrast to Pakistan, which was founded as a Muslim republic. However, even before the horrors of the communal partition, the INC had incorporated elements of the Hindu Mahasabha, or communalists from the upper classes. …

The result is that the struggles of the workers and peasants on the subcontinent were channeled into a reactionary nation-state structure that hamstrung any efforts at overcoming the legacy of the Raj. This is somewhat brought out in the Asia Society Museum exhibit, which notes the repressive atmosphere faced by the PAG and the role it played in dissolving the group.

Bombay authorities raided Souza’s home and removed two of his works from an exhibition in 1949 on the grounds of “obscenity” for a nude self-portrait, although there were likely political motivations as well. He left for the United Kingdom shortly afterward. Raza, another founding member of the PAG, left for France in 1950. While Souza’s and Raza’s decisions to move exemplify the rich interconnection between different artistic traditions, they also express the difficulties of the period in India.

Also noted in the exhibit is that, after a years-long campaign by the Hindu right, Husain (a secular Muslim who chose to remain in India after the partition) was forced out of the country in 2006. He had faced death threats and legal challenges on the basis of his portrayal of Hindu deities. Husain died in 2011 a citizen of Qatar and had returned his Indian passport.

While the PAG was short-lived, the individuals in and around it are major, lasting figures in modern art in India and internationally. The Progressive Revolution: Modern Art for a New India brought these works together for an audience that normally cannot access them.