This October 2018 video from Leiden in the Netherlands says about itself (translated):

Japan Museum SieboldHuis from 7 December 2018 to 3 March 2019 shows the exhibition ‘Kachō-ga. The poetry of Japanese nature’.

For the first time in the Netherlands there is an exhibition about kachō-ga, one of the most important genres in Japanese graphic art and painting. Special loans and masterpieces from the Netherlands and abroad such as woodcuts, folding screens, scroll paintings and photographs make this retrospective a must see for lovers of Japanese art.

This 8 December 2018 video shows more extensive images of the exhibition.

The SieboldHuis museum writes about it (translated):

Though sometimes other animals were depicted as well.

Colourful flowers and birds get all the attention in this exhibition which takes the visitor along the creation and development of this decorative genre. Artists can pre-eminently show their craftsmanship and poetic view of Japanese nature in this genre. The exhibition includes detailed, staged, lifelike, but also stylistic works by famous Japanese artists such as Hiroshige, Hokusai, Seitei, Koson and Hasui. In this exhibition, colourful plants and animals decorate folding screens, scroll paintings, albums, illustrated books, prints in the form of fans and graphic art from the late 18th to the 20th century. The photos by the Japanese top photographer Yoshinori Mizutani give a contemporary look at kachō-ga.

Mizutani’s photos at the exhibition depicted grey starlings and ring-necked parakeets. Both species have recently become numerous in Japanese cities.

You can also see several stuffed birds that were taken from Japan in the 19th century by Philipp Franz von Siebold. The namesake of the museum acquired a versatile natural history collection during his stay in Japan (1823-1829).

Japanese art has a rich tradition in the representation of flora and fauna. Until the 17th century powerful, fabulous animals such as dragons, phoenixes, lion-dogs, birds of prey and tigers were portrayed belligerently. This topic changed when the power of the samurai diminished and the urban culture developed. Rich traders sought refinement and a friendly style, and in the artistic imagination of nature lovely animals were portrayed in subtle and balanced compositions. Flowers and birds became a popular subject not only for aesthetic beauty, but also because of their symbolic function.

This is a folding screen depicting a Steller’s sea eagle. 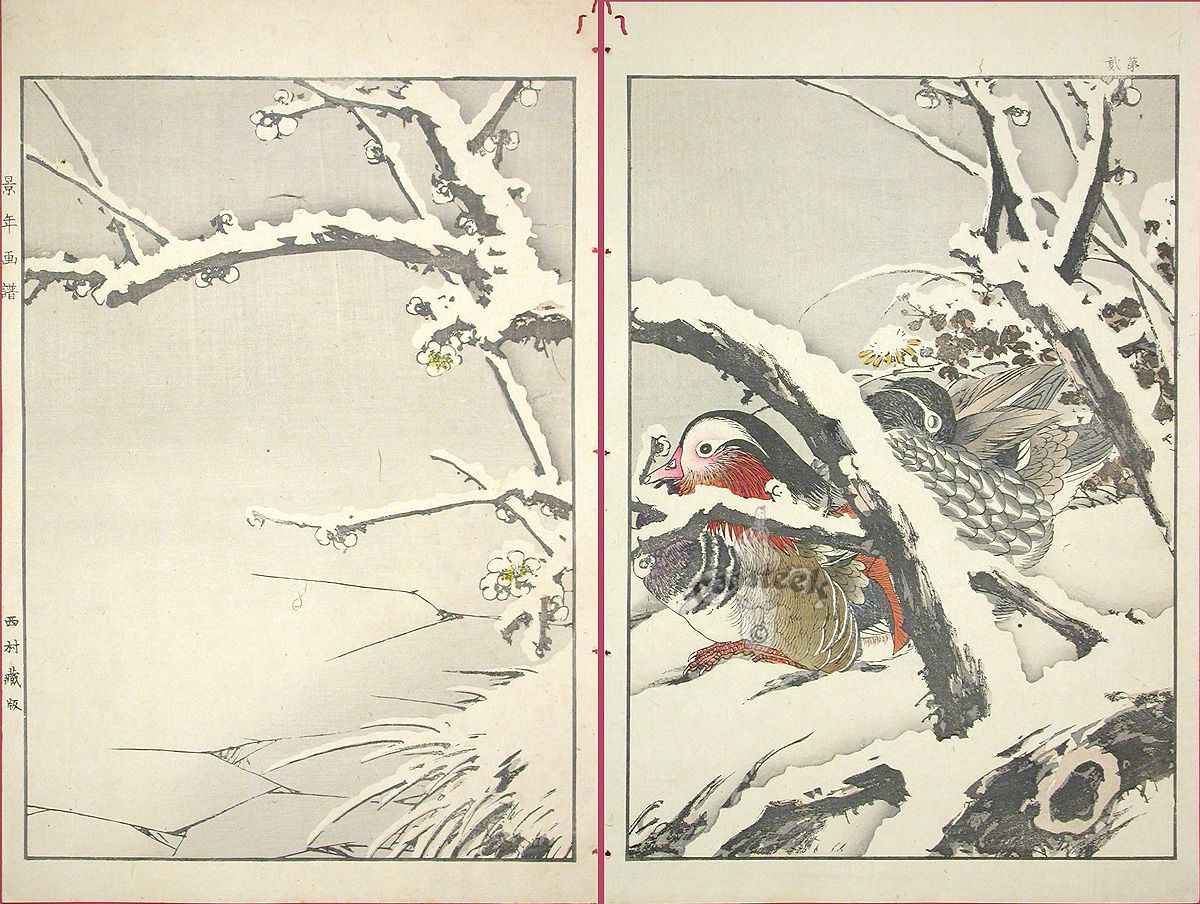 Also present was this 1891 double woodblock print by Imao Keinen (1845-1924). It depicts a mandarin duck couple in winter. It reminded me of mandarin ducks I have seen in winter in Hilversum harbour, and in spring in China.

This 8 December 2018 video is about the catalogue of the exhibition.