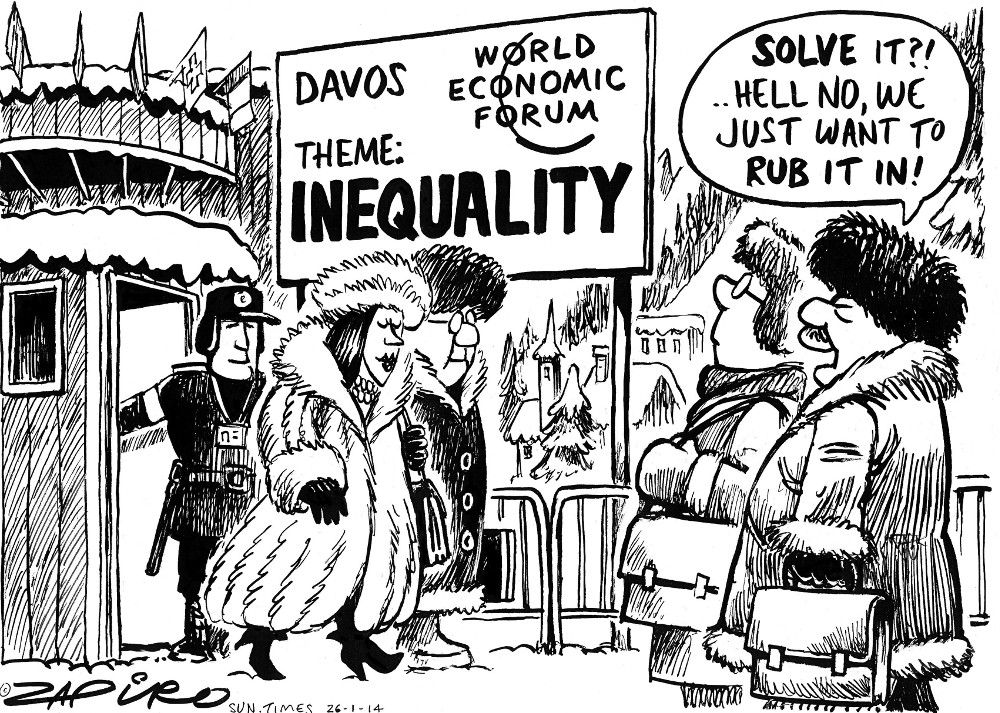 This year’s gathering of the global elites at the World Economic Forum’s annual meeting in Davos, Switzerland, is perhaps best summed up in the phrase: The chickens are coming home to roost.

For almost five decades, the WEF has been at the centre of the promotion of the free market policies that have funnelled trillions of dollars into the hands of the world’s wealthiest individuals and led to the widening of social inequality to historically unprecedented levels—an institutionalised process that accelerated to new levels after the meltdown of 2008.

In January 2009, as the financial crisis was still unfolding, there was a widespread fear at the annual Davos meeting that the bonanza was about to end. But as concerns over an immediate social backlash receded somewhat and the vast accumulation of wealth on the heights of society continued, thanks to the massive injection of cheap money by the US Fed and other major central banks, it appeared that all was still for the best in the best of all possible worlds.

No longer. Social anger and the class struggle are intensifying around the world. As the Guardian columnist Aditya Chakrabortty commented, the Davos billionaire is now experiencing a new and unsettling emotion: fear. As they face a world order crumbling before them, the Davos plutocrats are “terrified” and “whatever dog-eared platitudes they may recycle for the TV cameras, what grips them is the havoc far below.”

Surrounding the Davos gathering, there were attempts to introduce a course correction. In a column produced for the meeting, Financial Times economics commentator Martin Wolf pointed to the responsibility of the global elites for the elevation of populist and authoritarian political leaderships and insisted that law-governed democracies had to be made to work better. “Davos people”, he concluded, “please note: this is your clear responsibility.”

The international charity Oxfam issued a report showing that 26 billionaires held as much wealth as the bottom 50 percent of the world’s population, some 3.8 billion, that wealth accumulation at the top was increasing at the rate of $2.5 billion per day and called for a new “human economy” to be financed through increased wealth taxes.

The “Davos people” gave their answer to this reform agenda when they handed the platform for the keynote address to the newly installed extreme right wing and fascistic president of Brazil, the former military commander, Jair Bolsonaro, after giving it to another right-wing authoritarian Donald Trump the previous year.

Bolsonaro’s remarks were music to their ears as he set out his agenda for a “new Brazil” by creating new market opportunities, lower taxes on business and a “much-needed overhaul” of the country’s pension system. And they would have been mindful that these measures come with a commitment for the suppression of the working class.

As the Davos summit opened, the WSWS noted that the present regime of the world capitalist order, dominated and controlled by the global billionaires and their financial markets, was as incapable of any reform as pre-1789 France or the pre-1917 czarist autocracy in Russia both of which responded to social opposition with increased repression. The red-carpet treatment for Bolsonaro sent a message to the working class the world over: this is how your demands will be met.

This year’s annual meeting was marked by the absence of a number of political leaders, itself an expression of the growing political disorder within bourgeois politics and the rising tide of class struggle. British Prime Minister Theresa May could not attend due to the turmoil over Brexit; US President Donald Trump withdrew himself and the rest of the planned American delegation because of the government shutdown; French President Emmanuel Macron stayed at home as he confronted continuing protests by the “yellow vest” movement.

The circumstances surrounding another absentee were also significant. On the eve of the meeting, Zimbabwe’s president, Emmerson Mnangagwa, decided he would skip Davos in order to direct the suppression of protests against his government’s doubling of fuel prices, which, according to reports, led to 12 deaths last weekend.

Hanging over the entire gathering was the worsening global economic outlook and the consequences of even a minor downturn under conditions of deepening trade conflicts, above all the US trade war against China, the palpable breakdown of long established political structures and the rising tide of social anger and class struggle.

In the lead up to the meeting, David Lipton, the deputy managing director of the International Monetary Fund issued a warning that “history suggests” an economic downturn “somewhere over the horizon.” But under conditions of deepening distrust in government institutions there was no guarantee that the regulatory regimes put in place after the finance crisis “will be sufficient to keep a ‘garden variety’ recession from becoming another full-blown systemic crisis.”

Another warning came in the form of a letter written by billionaire investor Seth Klarman, which, the New York Times reported, was passed around amid the Davos attendees. Its central focus was on the impact of rising class struggles

“It can’t be business as usual amid constant protests, riots, shutdown and escalating social tensions,” he wrote. Citing the “yellow vest” movement in France, he continued on this theme: “Social cohesion is essential for those who have capital to invest.”

Klarman is among those who are aware that the measures taken by financial authorities over the past decade to combat the effects of the financial crisis are contributing to the creation of a new one as debt levels rise.

“The seeds of the next major financial crisis … may well be found in today’s sovereign debt levels,” he wrote. “There is no way to know how much debt is too much, but America will inevitably reach an inflection point whereupon a suddenly a more skeptical market will refuse to continue to lend to us at rates we can afford.”

And such a crisis will have immediate political effects, as Klarman and others recognise. “It’s not hard to imagine worsening social unrest among a generation,” he wrote,” that is falling behind economically and feels betrayed by a massive national debt without any obvious benefit to them.”

But a social order in which, as Oxfam reports, 82 percent of all the wealth created in 2017 went to the top global 1 percent is organically incapable of responding to deepening opposition other than with repression, underscoring the analysis of the International Committee of the Fourth International that present political situation is above all characterised by revolution versus counter-revolution.

This is SO good pic.twitter.com/NJRNtneNSo