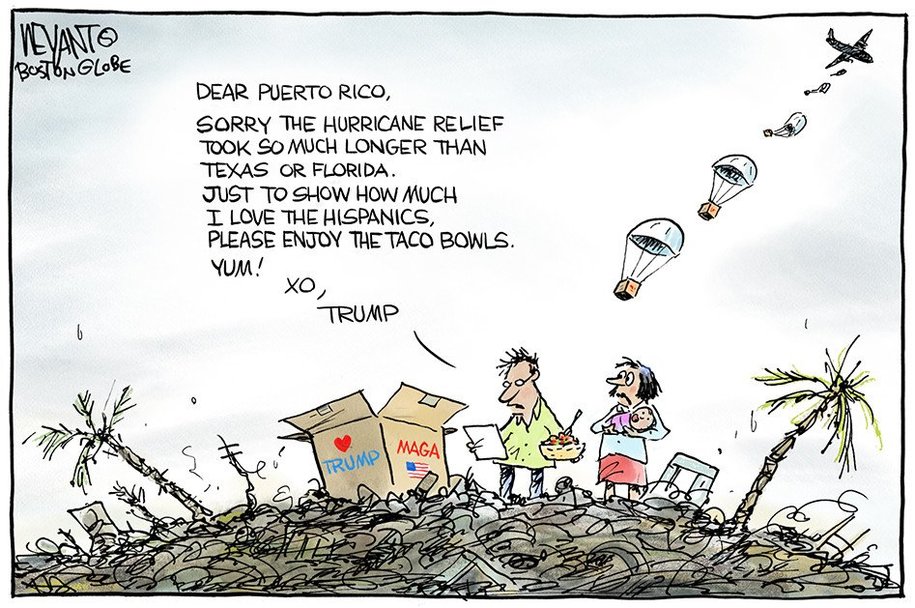 The Trump administration is forcing people to pay to be evacuated from Puerto Rico after it was devastated by Hurricane Maria: here.

President Donald Trump is lashing out at the mayor of Puerto Rico’s capital city in a war of words over recovery efforts after Hurricane Maria smashed into the U.S. territory. Trump is out with a series of tweets criticizing San Juan Carmen Yulin Cruz for criticizing the Trump administration’s hurricane response. The major has accused his administration of “killing us with the inefficiency”: here.

Donald Trump criticises Mayor of Puerto Rican capital for ‘poor leadership’. Tweeting from a golf course in New Jersey, the President claimed San Juan Mayor Yulin Cruz had been told by the Democrats to be ‘nasty’ to him: here.

Almost two weeks after Hurricane Maria hit Puerto Rico, all basic forms of social infrastructure in the US territory have completely collapsed.

To the contrary, Cruz warned, “something close to a genocide” is unfolding in Puerto Rico due to the government’s failed response. She “begged” Trump to fix the botched relief effort, adding, “We are dying here.”

That such a state of affairs could exist in a territory of the world’s wealthiest country is another unanswerable indictment of American capitalism, which has proven itself again and again incapable of addressing the most basic social needs of the population.

The financial aristocracy has responded with total indifference to the immediate needs of millions of desperate, impoverished people fighting for their lives on the island territory. Its primary concern is not saving lives in Puerto Rico but passing tax cuts in Washington. To the extent that Puerto Rico registers on their political radar, it is for the purposes of using the disaster to secure debt payments for the island’s Wall Street creditors and advance their austerity regime.

Acting Secretary of the Department of Homeland Security Elaine Duke said she was “very satisfied” with the government response and praised the “limited number of deaths.”

President Trump called the response “amazing” on Thursday and added on Friday, “It’s been incredible the results we’ve had with respect to loss of life. People can’t believe how successful that has been, relatively speaking.”

The contrast between these callous statements and the terrible reality exposes the oligarchic character of American social life. Aloof from and unconcerned with the immediate needs of the masses of people, the ruling elite evinces a total disdain for human life.

Details of the disaster zone are beginning to emerge more clearly. One hundred percent of the power grid is inoperable and will not be fixed for six months. Ninety percent of homes are damaged. Forty-four percent of the population of 3.5 million is without drinking water.

Most of the island has no cell reception. Hospitals are running out of medication, diesel for generators, and clean water. Food reserves are running low. Pumps for toilets and bathing have failed. Eighty percent of crops were destroyed.

The sewage system is broken and floodwaters have dispensed a layer of human and chemical waste across the island. Instances of waterborne diseases are growing and the mosquito population is exploding. Officials and relatives have not been able to make contact with many impoverished villages inland. ATMs and credit cards do not work, making it practically impossible to buy food without cash.

The relief effort has been a grotesque display of indifference and incompetence. A government capable of moving trillions of dollars across the world to wage war has proven unwilling and unable to mobilize emergency aid to an island less than three hours from New York City by plane. It is a ruling class that is far better at killing than at saving lives.

The government blocked the delivery of tons of foreign shipments of food and medical aid under the Jones Act, which restricts foreign ships from transporting goods between US ports. Only on Thursday—a week and a half after the storm hit—did the Trump administration waive the Jones Act restrictions for Puerto Rico, and even then only for a brief ten-day window.

Up to 10,000 shipping crates full of food, fuel, water and medical aid have sat for days in Puerto Rico’s ports. The Department of Homeland Security—the agency responsible for dispersing the goods through the Federal Emergency Management Agency (FEMA), had no plan to disburse these items.

Many roads, long neglected by cuts to infrastructure spending on the island, are impassible. The wind wiped out aboveground phone lines and cell towers and destroyed Puerto Rico’s power plants, which are a median 44 years old. Trucks cannot deliver fuel to power generators because they do not have enough fuel to make the drive.

Local officials in rural towns complain that the government is not delivering necessary relief even where the roads are intact. Roberto Ramirez Kurtz, Mayor of Cabo Rojo, told NPR, “The roads are open. I’ve been able to come here. So why haven’t we used this to [transport goods]?”

As a result, the death toll continues to grow. Though the official total is between 15 and 19, the Center for Investigative Journalism (CPI) wrote that this drastically underreports the number of fatalities and puts the figure in the hundreds or higher. Sources told the CPI that “bodies are piling up” at morgues and hospitals across the island.

Again and again, storms and natural disasters lay bare the irreconcilable antagonism between the social needs of the population and the money-grubbing parasitism of the rich. While trillions are made available for war, surveillance, police militarization, and corporate giveaways, the ruling class claims there is “no money” to protect the poor and working class from being killed en masse by wind and rain.

Never letting an opportunity go to waste, Trump shrugged off the growing death toll and threatened to withhold emergency funding as a bargaining chip to demand Puerto Rico pay a higher proportion of its debts to Wall Street creditors in ongoing bankruptcy proceedings.

In a speech held Friday before a room of corporate CEOs salivating over his proposed tax cuts, Trump said: “Ultimately the Puerto Rican government will have to work with us to determine how this massive rebuilding effort will end up, being one of the biggest ever, will be funded and organized. And what we will do with the tremendous amount of existing debt already on the island.”

Trump expresses in a more explicitly thuggish form what the financial aristocracy is thinking. While the Democrats raise token opposition to Trump’s handling of relief efforts on the grounds that the administration is moving “too slowly,” it is not just one presidential administration which is to blame, but the entire for-profit capitalist system.

Though the military is now being mobilized, ostensibly to help with the relief effort, their real purpose is to intimidate or crush widespread social opposition, both in the response to the storm and to the austerity plan imposed by Wall Street through the island’s bankruptcy proceeding. This has been the US military’s basic role for 119 years as an occupation force on the island.

The destruction of Puerto Rico raises the immediate need for the expenditure of billions or trillions of dollars to save the lives of those at risk of death and disease. Beyond the provision of resources like food, water, fuel and medical supplies, billions more will be required to rebuild and modernize the island’s infrastructure and the homes of its residents. This cannot be accomplished under capitalism. It requires confiscating the wealth of the financial aristocracy, nationalizing the banks and corporations, and reorganizing the world economy not for profit but to meet the needs of the human race.

From Science News in the USA:

When Hurricane Maria’s 250-kilometer-per-hour winds slammed into Puerto Rico on September 20, they spurred floods, destroyed roads and flattened homes across the island. A week-and-a-half later, parts of the island remain without power, and its people are facing a humanitarian crisis.

The storm also temporarily knocked out one of the best and biggest eyes on the sky: the Arecibo Observatory, some 95 kilometers west of San Juan. The observatory’s 305-meter-wide main dish was until recently the largest radio telescope in the world (a bigger one, the FAST radio telescope, opened in China in 2016).