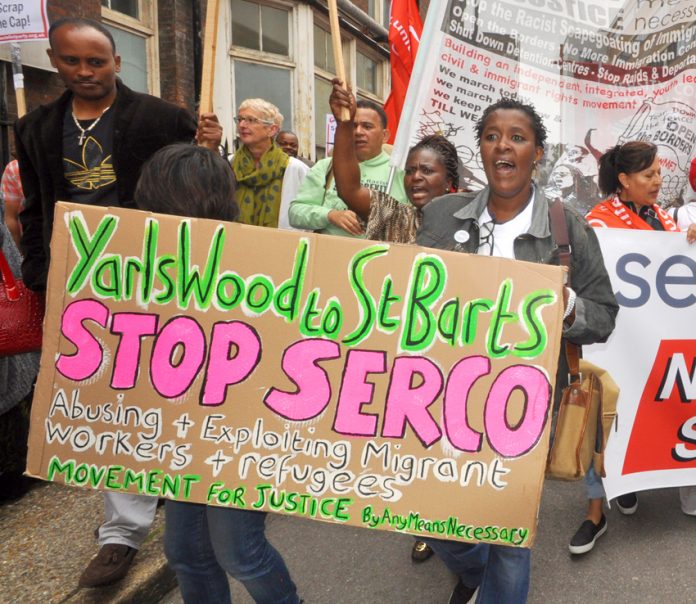 High levels of homelessness and destitution among refugees

A NEW SURVEY, Refugees without refuge, published by the Refugee Council on Friday, has found high levels of homelessness and destitution among refugees shortly after they have been granted their refugee status.

As government support is rapidly cut off after somebody receives status, refugees can find themselves homeless, forced to rely on charities, friends, families and foodbanks to meet their basic needs.

One refugee summed up their experience by saying that ‘the government grants refugee status without granting refuge’. The Refugee Council conducted a survey of 54 refugees who had been granted status since 2016, and found that:

• Of the 54 respondents to the survey more than half, 31, slept rough or in a hostel or night shelter in the period after they were granted refugee status.
• None of the people who were living in asylum-support accommodation had managed to find secure accommodation by the time they were evicted at the end of the move on period.
• Most of these newly recognised refugees were forced to rely on charities, friends and family, and foodbanks once their asylum support payments were terminated as Home Office support dropped away and employment had not been secured.
• 30 people reported feeling uncomfortable about relying on others for food, money or accommodation, and 12 said they felt unsafe.
• Many respondents reported negative feelings after being granted refugee status, and one reported multiple suicide attempts.
• Participants reported high levels of loneliness and isolation.

Refugees who arrive in the UK through formal resettlement schemes, such as the Syrian Vulnerable Persons Resettlement Scheme, benefit from tailored support to help their integration and have accommodation secured before they arrive. In stark contrast, refugees who have arrived in the UK independently have their support withdrawn within 28 days of being granted refugee status, leaving them at real risk of homelessness and destitution.

The Refugee Council’s Director of Advocacy, Lisa Doyle, said: ‘The findings of this survey add to a growing body of evidence that shows the many newly recognised refugees become homeless and destitute at the point when our government has committed to protect them. ‘Instead of this being a time of relief and happiness for refugees, quite often the opposite is true as they find themselves without anywhere to live and relying on the charity of others to survive.’

‘The subsistence payment rates in 2017 are £36.95 per week. ‘Once a person receives refugee status, they are told that the asylum support they are receiving from the Home Office will cease in 28 days. This is known as the “grace” or “move on” period – originally presumably because the government expected that the newly recognised refugee will be able to secure housing and income in this timeframe.

‘Eleven of the refugees we spoke to were not in receipt of asylum support when waiting for their decision. Of those who were supported by the Home Office, 22 received accommodation and subsistence money, and 22 received subsistence money only (meaning they had been living where they had found themselves). This means 22 will have faced eviction by the Home Office at the end of the 28 day period and 44 will have had their financial support terminated at the end of the move on period.

‘The Biometric Residence Permit (BRP) is a government issued identity document given to people who are granted leave to be in the UK, including as a refugee. The BRP includes information such as their name, date and place of birth, a digital photo of their face, their fingerprints, their signature, their immigration status and conditions of stay as well as their eligibility for mainstream services such as free NHS services and benefits.

‘For newly recognised refugees, the BRP is often the only form of identification they will have and the only one they are required to have. Many refugees will no longer have their passports. This means the BRP can be vital for newly recognised refugees to prove their identity and entitlements to statutory services, benefits, employment, accommodation and bank accounts. Any delays in receiving it can therefore have an impact on an individual’s ability to secure an income and accommodation once their asylum support is terminated.

‘Given the fact that most people seeking asylum are not permitted to work, they may be without key documents and face losing their accommodation in 28 days, it is not surprising that there were extremely low levels of employment among the sample at the end of the move on period. In this sample, only one person had a job. Another was on job training for six weeks, but was not in paid employment at the time the move on period ended. Two people had become full-time students.

‘In order to receive benefits payments, people ordinarily need a bank account for them to be paid into. It used to be possible for payments to be made through a Simple Payment card, but this service has recently been discontinued. Opening a bank account should be a straightforward and fair process open to all who meet the criteria set by financial institutions. However, many newly recognised refugees face difficulties in doing so.

‘While 49 of the 54 participants had successfully opened a bank account, 27 reported difficulties in doing so for the following reasons: No proof of address 18, No proof of income 13, ID not recognised 12. At a point when refugees are about to lose their accommodation and may face delays in receiving documentation, there is a high likelihood that people will encounter these problems.

‘There is also a difficulty in banks requiring an income to open an account, and the Department for Work and Pensions requiring a bank account in order to supply that income. Three respondents stated that a charity wrote a letter for them to support their application for an account.

‘Given the difficulties newly recognised refugees face in terms of finding employment quickly, it is likely that most people will rely on welfare benefits to support themselves when their asylum support is terminated. Most survey participants applied for welfare benefits, predominantly Jobseekers Allowance. The responses to the question ‘Which benefits did you apply for?’ are displayed in the table below. As people can apply for more than one type of benefit, the numbers exceed the size of the sample. Some received support from people they barely knew – examples included friends of the family, somebody who attended the same church as them, and other homeless people.

‘Of those living in asylum support accommodation (22), 21 had to leave their accommodation at the end of the 28 days. One person was initially made to leave, but after the intervention of a charity, he was allowed back for approximately two months as there was an error on his BRP.

‘Where they were made to leave their asylum accommodation, people stayed in the following places: Temporary housing from local authority, 3; Slept rough, 2; Homelessness hostel or night shelter, 5; Refugee hosting scheme, 3; Friends, 10; Friend of the family, 1. It is important to note that nobody had managed to find secure accommodation by the time they were evicted.

‘This underlines the extreme difficulties that people face trying to get stable accommodation in such a short period of time at a time when they may not have the correct documentation, be unfamiliar with the UK housing market and will not have funds available for the deposit and rent in advance required to secure housing in the private rented sector.

‘There is a high prevalence of homelessness and housing insecurity across the full sample. Of the 54 respondents to the survey more than half, 31, slept rough or in a hostel or night shelter in the period after they were granted refugee status. While these are the most visible forms of homelessness, newly recognised refugees also found themselves in other homeless situations, such as in temporary accommodation and “sofa surfing” with friends and family.

‘People had often stayed in multiple places and the answers showed instability and frequent moves for many. Respondents moved between different types of homelessness. Only 23 of the sample seem to have achieved tenancies (private rental or social housing). Respondents reported having to rely on a range of people for food, accommodation and money since they gained refugee status and it was friends (31), relatives (6) and charities (4) who helped.’

Migrants: obligations and practices in “receiving countries”. The right of asylum under threat: here.