Jeff Sessions‘ attempted to jail Alabama civil rights workers who were registering Black voters in 1985. Since then, time and time again, Sessions has failed to stand up for the rights of all Americans. As Rep. John Lewis‘ told the Committee during Sessions’ confirmation hearing: “We need someone as Attorney General who’s going to look out for all of us.”

From the NAACP Legal Defense Fund in the USA today:

The full Senate is scheduled to vote this week on the confirmation of Senator Jeff Sessions to serve as Attorney General of the United States. LDF has thoroughly researched Jeff Sessions’ troubling decades-long record on civil rights and racial justice and followed his hearing closely. Both his record and his testimony underscore that he is unqualified to be Attorney General.

We urge you to call your senators right now about Jeff Sessions and make sure your voice is heard.

Here are five things you should know from Senator Sessions’ testimony before the Senate Judiciary Committee:

1. In ten hours of testimony, Sessions never spoke about the need to defend victims of discrimination.

2. Sessions continued to misrepresent his record and take credit for significant civil rights victories secured by other lawyers.

4. Sessions declined to commit to “defending the rights of Muslim Americans as strenuously as those of any other faith” to be free from discrimination, and said he was “not sure” if lawyers with a secular worldview are as capable of determining the truth as religious lawyers.

5. He offered no assurances that he would vigorously protect the rights of LGBTQ Americans or women.

We need an independent, strong Attorney General who will unite the country and build public trust that our government and justice system will work fairly on behalf of everyone. That clearly is not Jeff Sessions. 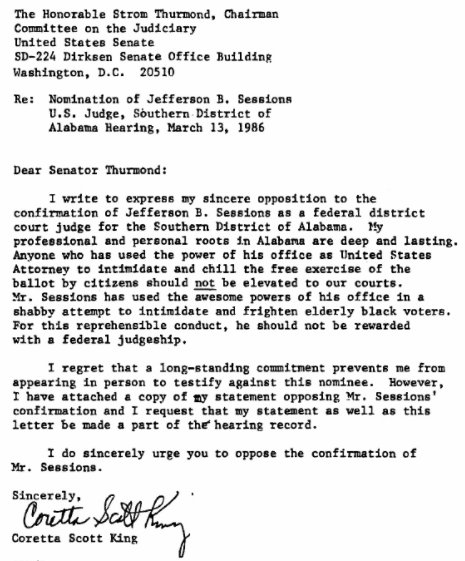 INSIDE THE SENATE FLOOR SCUFFLE OVER SILENCING ELIZABETH WARREN Senate Majority Leader Mitch McConnell (R-Ky.) invoked Senate Rule XIX to silence Sen. Elizabeth Warren (D-Mass.) during a speech she was giving in opposition to the nomination of Sen. Jeff Sessions (R-Ala.) as attorney general. Warren had begun reading a letter Coretta Scott King wrote in 1986 to protest Sessions’s appointment to a federal judgeship when McConnell called a Senate vote to bar her from speaking, saying she had gone over the line. Take a look at the letter from Coretta Scott King Warren was attempting to read. And here’s why you saw #ShePersisted trending on Twitter. [HuffPost]

More than 200 students rallied and marched at Wayne State University in Detroit on Monday evening against Trump’s executive order banning refugees and visitors from seven majority-Muslim countries. Metro Detroit has a higher percentage of residents with Middle Eastern roots than any urban area in the US, and Wayne State University is the home of thousands of students who are immigrants or the children of immigrants: here.