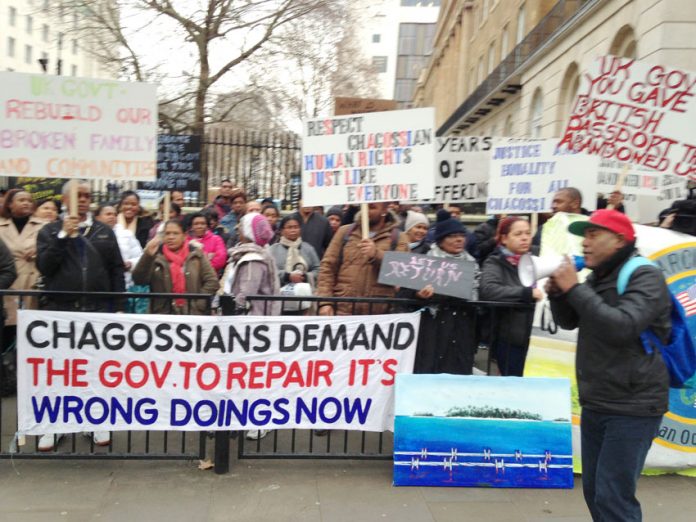 SOME 100 Chagossians demonstrated opposite Downing Street yesterday over their treatment by the British government.

Frankie Bontemps told News Line: ‘We’re here following the decision of the British government that we are not allowed to go back to our homeland. We are back to square one. For 50 years we have been fighting for the right to return. The government decided without consulting us. Enough is enough.

‘We are fed up. There are so many problems facing the Chagossians in the UK. We have people in prison because of the immigration laws – families are divided. There are a lot of housing and citizenship issues. The Chagos Islands are an exceptional case and we should have exceptional treatment.

‘This can’t go on. We want a pension for the natives. If they won’t let us return at least they should treat us properly here.’

The UN General Assembly has backed a resolution to refer the legal status of the Chagos Islands, including Diego Garcia, to the International Court of Justice (ICJ) at The Hague: here.

SUPREME Court rejection of the latest appeal by Chagos Islanders against the British government’s continued denial of their right of return to their homeland is beyond comprehension: here.

OVER 50 exiled Chagossians living in the UK camped out in Trafalgar Square yesterday, the first day of a five-day occupation: here.

NEXT week the British government will be hauled kicking and screaming before judges at the International Court of Justice (ICJ) in The Hague over the despicable treatment of the Chagos Islanders at the hands of British and US imperialism: here.

BRITAIN APOLOGISES TO CHAGOSSIANS – NOW HAND THEM BACK THEIR ISLANDS: here.