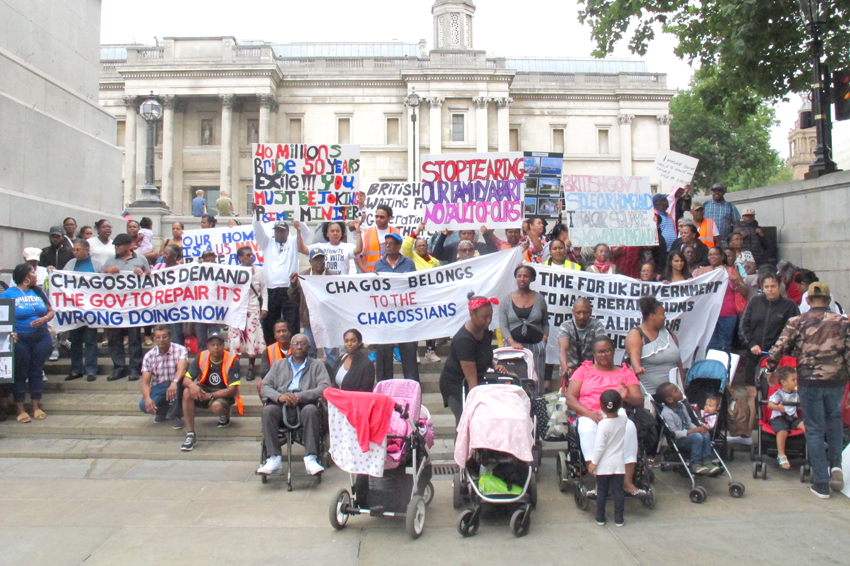 THE INTERNATIONAL Court of Justice (ICJ) known as ‘the Hague’ ruled yesterday that Britain’s ‘decolonisation and displacement’ of the Chagos Islanders from the Indian Ocean Archipelago was ‘unlawful’.

Judges ruled that Britain should relinquish control over the territory ‘as soon as possible’. The case, brought by Mauritius, ruled on the legal consequences of the separation of the Chagos Archipelago from Mauritius in 1965.

Although the decision is a ‘non-binding advisory opinion’, reading a summary of a the 14-member tribunal’s decision, Presiding Judge Abdulqawi Yusuf said Britain was ‘under obligation to bring to an end the administration of Chagos Islands as rapidly as possible’.

During court hearings, Mauritius said it had been forced to give up the remote archipelago to gain independence from Britain during the decolonisation process. Britain maintained that Mauritius had given up the islands willingly.

After gaining the islands in the early 1960s, Britain evicted almost 2,000 residents to Mauritius and the Seychelles to make way for the US military base on the island of Diego Garcia.

Between 1968 and 1973 around 2,000 Chagos islanders were forcibly evicted from the island, their pets killed in front of them, with the British invaders burning their homes to the ground to make the island uninhabitable. They were forced onto ships and dumped in the slums of Mauritius and the Seychelles.

The Chagos people were described in a British diplomatic cable at the time as a ‘few Tarzans and Man Fridays’. Today around 10,000 Chagossians and their descendants are divided among Mauritius, the Seychelles and Britain. They demand the right to return to their island and appropriate compensation for the suffering of themselves, their families and their descendants.

Isabelle Charlot, Chairperson Chagos Islanders Movement, told News Line yesterday afternoon: ‘This is a step forwards for our Chagos people to go back to our homeland. However, we are disappointed because we thought the judges would use their knowledge and wisdom to give the right to the Chagossians to decide what they want.

‘This should have been about the Chagossians more, but again it is about politics. We are being neglected and forgotten again. Can we trust the Mauritius government? Will they let us back to our island, will they return Chagos to the Chagossian? Will Great Britain honour what has been advised by the Hague? We are going to keep fighting until we return. The fight continues!’

This video from Mauritius says about itself:

Demonstration against UK occupation of Chagos

Also: To put on the agenda once again the original demands for full decolonization, the re-unification of Mauritius, for base closure and environmental clean-up, and for the right to return and reparations for all Chagossians.

What this means is that the march is perhaps the beginning of a new long-term campaign that needs to be built up on these issues.

By Sam Tobin in Britain:

Imperialism The fight is not over yet for Chagos Islanders

CHAGOS ISLANDERS have been granted further grounds to judicially review a decision banning them from returning to their homeland.

About 2,300 people were removed from the British-controlled Indian Ocean islands in the 1960s and 1970s to make way for a US air force base on the largest of the islands, Diego Garcia. In return, Britain got a discount on Polaris nuclear weapons.

Both he and Solange Hoareau were previously granted a judicial review of Foreign Secretary Boris Johnson’s decision in November 2016 to not assist or permit resettlement.

Ms Hoareau sought permission today to appeal against the decision on the grounds that it was in breach of the European Convention on Human Rights (ECHR). She also raised a complaint that Mr Johnson had not given due regard to claims that the Chagossians are a distinct racial group.

Mr Johnson denied that European human rights law applied as the ECHR had not been extended to the islands, but Ben Jaffey QC, for Ms Hoareau, told the High Court that Britain “exercises total physical control” over the islands. He also submitted that Ms Hoareau was a “victim” of the government’s decision.

Kieron Beal QC, for Mr Johnson, said that the removal of the Chagossians in the 1970s was “incapable of justification”, but he maintained that the government’s position was that it was not “appropriate to sponsor or promote or permit” resettlement.

Mr Justice Singh ruled that there was an “arguable case” on both grounds and granted permission for a judicial review, which is expected to be heard in May.

Many Chagossians live in Mauritius and the Seychelles, while another community centres on Crawley, West Sussex. Tory MP for Crawley Henry Smith introduced a Bill last week that calls for anyone of Chagossian descent to be granted British citizenship.

4 thoughts on “British deportation of Chagos islanders is illegal”