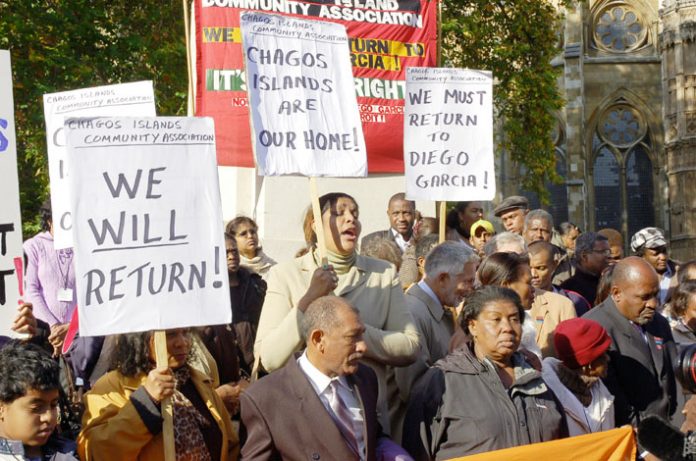 THE Chagossian community in Crawley have reacted with fury after an offer from the coalition government and Vince Cable to allow the islanders to return to their homeland was immediately withdrawn.

Cable had written in a letter that ‘Steps have already been taken to ensure their return.’

The islanders were brutally evicted from the Chagos islands in the 1960s and 70s by British governments who made a secret deal to allow the US military to build a huge base on Diego Garcia.

Cable, who was a member of the Chagos All-Party Parliamentary Group (APPG), signed a letter stamped House of Commons on the 9th September to one of his constituents, Dr Beckmann, ‘regarding the repatriation of the Chagos islanders’.

In the letter, he states: ‘I remain committed to ensuring that the plight of the islanders is resolved in a just and fair way. The Liberal Democrats have actively supported their cause in the past and we will continue to aid their campaign to see justice done.’

He continues: ‘The Foreign Secretary, William Hague, is also committed to a fair settlement of this long-standing dispute. Steps have already been taken to ensure their return.

‘The Coalition Government are dropping the case in the European Court of Human Rights opting instead for a friendly settlement. The previous Government were trying to uphold the expulsion.’

No sooner had the letter been published by the New Statesman, when the magazine was contacted by an official from the Department of Business, Innovation and Skills, informing them that the letter from Cable had been ‘sent in error by his constituency office’ and that another letter would be sent out as soon as possible ‘saying something different’, stated the magazine.

Not surprisingly, the ‘administrative error’ has astonished and infuriated Chagossians.

Hengride Permal, the chair of the Chagos Islands Community Association said: ‘This proves that you cannot trust British governments.

‘Give us your support. Fight alongside us. March with us. We are determined to return to our Chagos Islands!’

Marie-France, secretary of the Chagos Island Community Association, told News Line: ‘It is disgraceful to do this to us.

‘Because you don’t just write a letter: you first meet your members or committee and consult with them before you put your signature to a letter which relates to a case in the European court and is able to be published.

‘So you can’t sign a letter and then say that this is an error. It can’t be an error if it has got your name signed at the bottom.

‘What further upsets us is that a member of the government has acted in such a cruel way to the Chagossian people and yet it is not considered newsworthy. None of the daily papers in this country have mentioned this disgrace except in a magazine.

‘And no-one has even said sorry for pledging support and then withdrawing it a half hour later. It is truly shocking.

‘This is just further evidence of the way we have been treated since being thrown off our islands. It’s political because of our case in Strasbourg.’

Jean-Claude Luc, who was born on Diego Garcia and exiled to the Seychelles, said: ‘The British government is able to make a mistake but the Chagossian people are not allowed to make a mistake.

‘The British government in the 1970s, when they offered a small amount of money for compensation to the Chagossian people, who were poor in writing and reading, they told us to sign but didn’t tell us we would lose our right to return to our homeland.

‘They tried to trick us. The people signed because they did not know; to them it was just black and white on a piece of paper.

‘But today, the same people sign their name to a piece of paper and call it a mistake. Who in the world can understand that!

‘This is not the Chagossian signature – this is the British government signature on a piece of paper. So do not say this is a mistake!

‘In this world today, the Chagossian people are not stupid – our mind is open, our eyes are open, we know everything.

‘I am so angry. Maybe the British government think they are dealing with animals in a zoo that don’t know anything.

‘Today, the Chagossians can stand up to them and can speak with them clear and say: I have a right, you have stolen my right – now give me my right back!’

David Snoxell, former British high commissioner to Mauritius (2000-2004), who is co-ordinator of the Chagos APPG, remarked: ‘Chagossian hopes have been raised and dashed several times over the last decade — but never before in a single afternoon.’

It is a far cry from Snoxell’s previous evaluation of ‘Chagos supporter’ Cable, before becoming a minister, saying he was ‘a very honourable man, and it is clear that his convictions on this matter are deeply felt’.

November 2010. Commercial fishing around the Chagos Archipelago has now ended making it the largest no-take marine protected area (MPA) in the world: here.