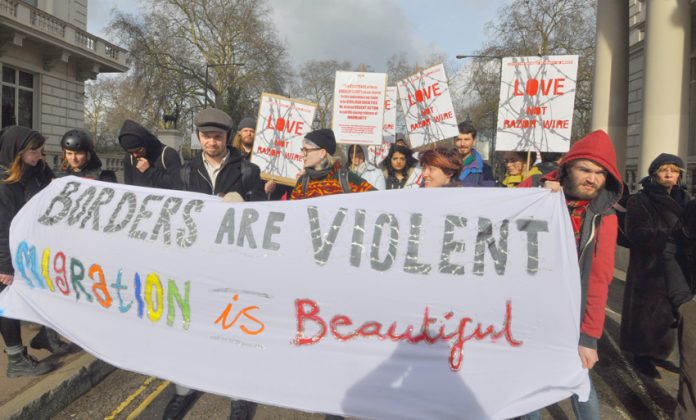 This photo from England shows a Valentine’s Day ‘Love Not Razor Wire’ protest outside the French embassy in London against the treatment of refugees in Calais.

THOUSANDS OF CALAIS REFUGEES TO BE EVICTED BY POLICE AND TROOPS

THOUSANDS of refugees living in the southern part of the camp in the French port of Calais known as the Jungle have been ordered to leave or face eviction.

They have until 20:00 local time (19:00 GMT) on Tuesday to leave the southern part of the sprawling camp. Anyone remaining will be forcibly removed to allow for the makeshift structures there to be razed. The area has become a cultural hub for many of the migrants. It has shops, a school and religious structures.

The authorities said up to 1,000 people could be affected but volunteers on the ground estimated that at least twice that number lived in the area. Aid associations believe around 2,000 migrants live in the southern part of the camp.

Thousands of migrants from the Middle East and Africa have congregated around Calais in the hope of crossing to the UK. On Friday Help Refugees’ Calais manager Philli Boyle said the amazing work done by the Women and Children’s Centre in the camp – one of several crucial services – will be lost when the eviction and bulldozing goes ahead.

Over 400 women and more than 500 children use the centres and facilities Help Refugees supports. ‘These are set to be bulldozed without replacement,’ Boyle said. Help Refugees has called on individuals to ‘join a whole host of people who are calling on the (UK) Prime Minister to ask his French counterpart to delay the demolition’.

Last Thursday, over 100 of Britain’s leading actors and authors and academics, including Jude Law, Helena Bonham Carter, Benedict Cumberbatch and Idris Elba, signed an open letter to Cameron urging him to allow children stuck in the camp to enter the UK.

The letter called on the UK prime minister ‘to persuade the French authorities that the decision to destroy further parts of the camp in Calais is postponed until all the minors currently residing there are either given full child protection within the French system or enabled to re-unite with their loved ones in Britain’.

It stressed: ‘This is a humanitarian crisis that needs to be acknowledged as such, and it is imperative that we do everything we can to help these innocent and highly vulnerable refugees, especially the minors, as swiftly as is humanly possible.’

Citizens UK has identified hundreds of unaccompanied minors in Calais who have valid legal claims to have their asylum applications processed in the UK. The first of these cases was heard in the UK courts last month, with the court ruling the children should legally be reunited with family in the UK while their asylum cases were processed.

One of the signatories, Jude Law, said: ‘Last week I visited the camp, and met some of these unaccompanied children who have no choice but to endure the horrific conditions of the Jungle. These are innocent, vulnerable children caught up in red tape with the frightening prospect of the demolition of the Jungle hanging over them. David Cameron and the British Government must urgently work with the French authorities to alleviate this humanitarian crisis.’

Referring to children in the camp, Simon Cuff from the charity Citizens UK said: ‘Those with rights to be with their families in Britain should be reunited with them, those without the right to the UK should receive specialist support and care from the French. Not chased off by police in riot gear.

‘We’re hugely grateful to all the public figures who’ve stood up and stepped out to help protect these refugee children. Governments need to get in there, bring order to the chaos and create safe legal routes to protect people.’

Eight groups working in the camp, including Doctors of the World, have warned that the alternative accommodation is not suitable. In a protest letter to the French interior minister, the group wrote that they are ‘very far from answering the needs of the problems encountered’.

Caritas relief organisation volunteer Pascal Froehly said: ‘I find it extremely annoying and unfair to move these people away from what they have created, including churches, shops and restaurants.’ He added that ‘it’s just a bed for them’ stressing that the plans to move migrants to heated containers elsewhere in the camp offered them no chance to socialise.

The plan was announced last Friday 12th February. The Pas-de-Calais prefect Fabienne Buccio said that they plan to evacuate around half of the migrant camp on the outskirts of the northern port town. Buccio said: ‘The time has come to move on, no one must live in the southern part of the camp, everyone must leave this section. We’ll give them a week to get their belongings together and take up a place that has been put at their disposal.’

Meanwhile, Citizens UK is calling for help to find 5,000 homes for Syrian refugees.

It says: ‘Calling all landlords! Join our homes for resettled refugees register today. A million Syrian children are languishing in refugee camps. Kids are drowning trying to reach safety.

‘The UK has so far resettled only around 200 Syrian refugees from the camps. We want to see 10,000 refugees resettled here each year for at least the next two years. That’s likely to mean around 5,000 refugee families over the two year period.

‘Citizens UK has been campaigning for a year to get local authorities to pledge to resettle just 50 refugees each. Many councils are willing, but they need our help to find appropriate homes for families in the private rented sector. We desperately need landlords to join our Homes for Resettled Refugees Register.

Please sign up on the Homes for Resettled Refugees Register if you: l own a family-sized rental property in the UK; l would be prepared to offer it as a home for a Syrian refugee family if it is vacant when there is demand in your area;

• can offer a 3-year tenancy to enable the family to have some stability when they arrive;
• are able rent out the property for the Local Housing Allowance Rate in your area. The first 12 months of the rent will be paid for by the European Union under a scheme for placing vulnerable refugees.

‘If you match these criteria, please register below. If you do not, please try and find landlords and letting agents in your area who might help, and get them to sign up.’

A central theme of the 66th Berlin Film Festival (Berlinale) was the plight of refugees and the ramifications for Europe and the world arising from the historically unprecedented mass movement of people fleeing war and poverty. The fact that the main prize of the festival went to a film, Fire at Sea (Fuocoammare) by Gianfranco Rosi, dealing directly with the fate of refugees attempting to enter Europe, is significant: here.

French security forces violently attacked refugees with tear gas Monday as they launched the demolition of the refugee camp in Calais. The assault, launched as Macedonian police assaulted refugees at the Greek border to shut off the Balkan route leading to Germany, testifies to the escalating persecution of refugees throughout Europe: here.

‘WITH our aid, let us through! Refugees are human too!’ hundreds of angry protesters demanded after their 250-vehicle strong Convoy to Calais was blocked by UK police from boarding the ferry at the port of Dover, at the bequest of the French state: here.

Last Thursday, Germany’s lower house of parliament (Bundestag) passed the so-called Asylum Package II by a large majority. The upper house (Bundesrat) then agreed on Friday to this further restriction of the country’s right to asylum as well as a law making it easier to deport convicted foreigners: here.

German Chancellor Merkel’s refugee policy and the call for a European army: here.